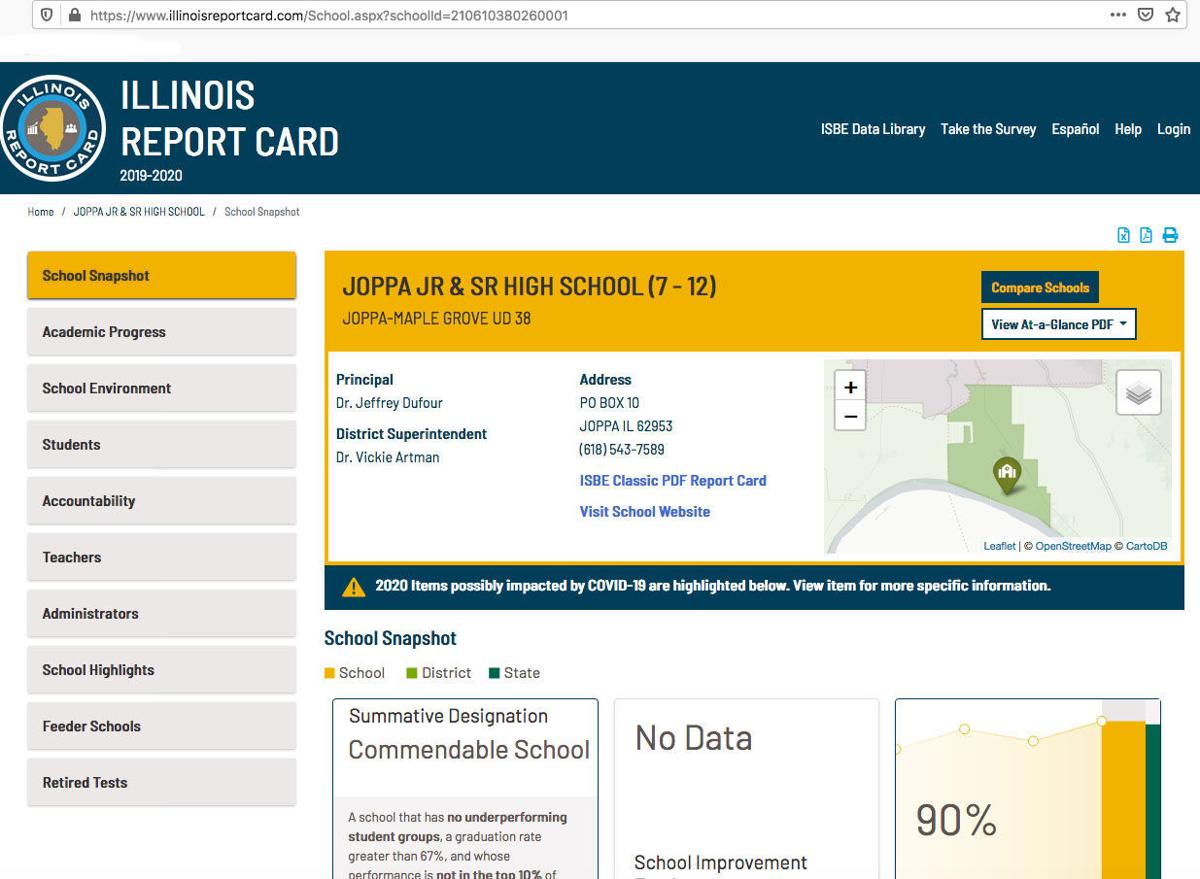 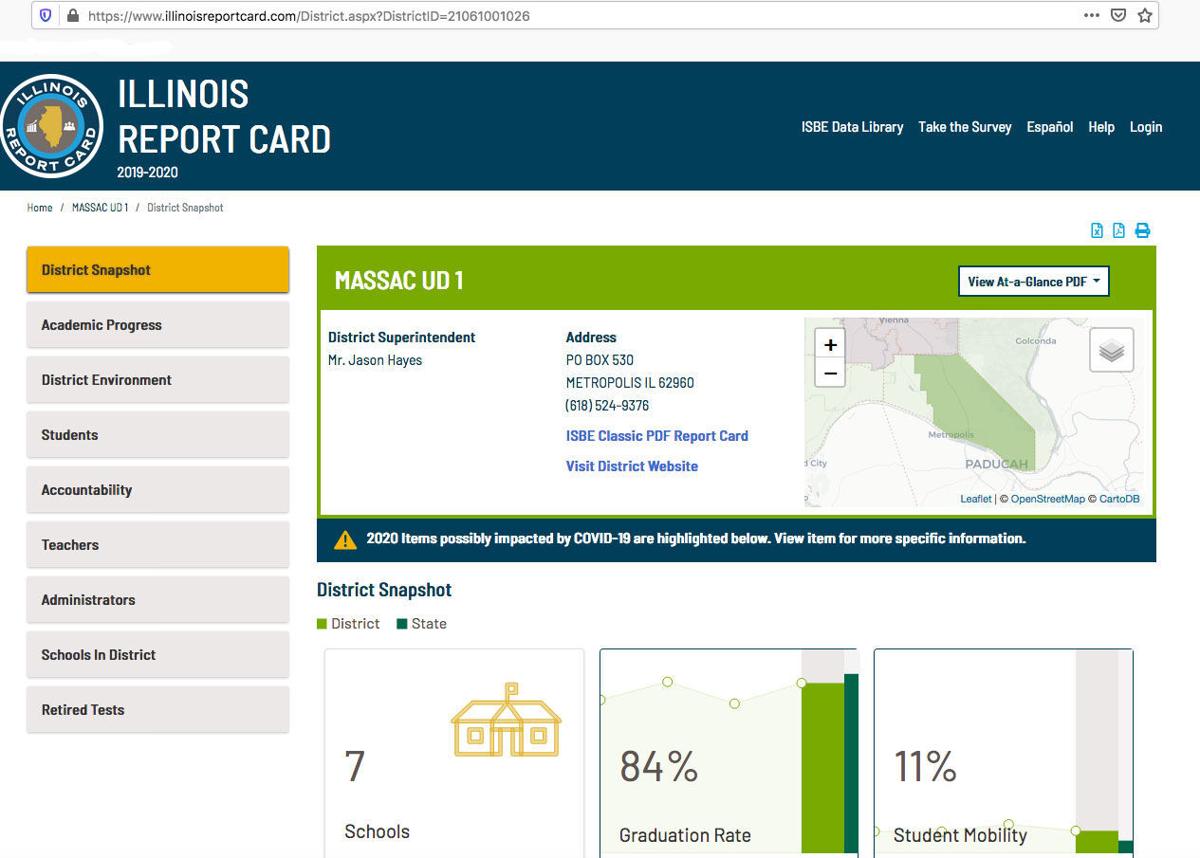 School report cards provide a variety of information on categories from academic progress to district environment to students to accountability to teachers to administrators to schools in the district. While this year’s report cards aren’t quite as informative due to COVID-19’s impact on the end of the 2019-20 school year, information is still available at www.illinoisreportcard.com by typing in the school or district desired.

School report cards provide a variety of information on categories from academic progress to district environment to students to accountability to teachers to administrators to schools in the district. While this year’s report cards aren’t quite as informative due to COVID-19’s impact on the end of the 2019-20 school year, information is still available at www.illinoisreportcard.com by typing in the school or district desired.

Just as report cards provide parents and teachers with an idea of how their students are progressing during the school year, school districts have their own report card that lets their constituents know how schools individually and districts as a whole are doing.

And while the 2019-20 school year report cards — found at www.illinoisreportcard.com — aren’t as informative as they usually are due to COVID-19’s change to the school year, what information is available provides officials with the Massac Unit 1 and Joppa-Maple Grove school districts just enough to see what improvements need to be made.

Joppa-Maple Grove School District #38COVID-19 struck the area right at the time students take their annual Illinois Assessment of Readiness tests. It’s those tests that provide the bulk of the information found in the Illinois Report Card.

That means the administration and teachers at Joppa-Maple Grove are using the 2018-19 test results and “delving deeper into the curriculum and making those things an enriching experience,” Dufour said. “I think you’re always looking at the mainstays of the building — math and, especially, the reading component. Even though the state assessments are once a year, we do formative assessments all the time, so I think that’s helped us grow some. We’re making those data-driven decisions in the classroom in both buildings, but it’s a little bit different when you can look at a normed test and make a plan from there. We’re just concentrating on the curriculum — following our curriculum guides and making sure the expectations from the state are being fulfilled. I think that’s the best way for us to do it.”

The 2020-21 school year is taking that growth to an even different direction.

“It’s not the norm that we’re used to. We’re just continuing to push. We’ve been a lot more fortunate than other districts with our rate of students’ exposure (to in-person learning) and teachers being able to stay in the building. I think that’s really helped,” Dufour said. “One thing that’s helped us was doing synchronous learning — to where we have a teacher in a class giving instruction to the student at home via Google Meets (and at the same time giving instruction to the students in the classroom). It can’t replicate that face-to-face time in the classroom, but it’s been pretty close. That has been one of our standing graces.”

And Dufour is looking forward to seeing what a difference Joppa-Maple Grove’s 2020-21 education plan has made as the State of Illinois and the Illinois State Board of Education (ISBE) have decided that assessments will be given in the spring.

“They’ve already given the windows, so we’re planning on that. When we get back from break, we’re going to discuss the Illinois Assessment of Readiness and look at all those other exams we’re going to be taking in the spring just to prepare,” Dufour said. “I fully plan on the Illinois Department of Education and the Illinois State Board of Education not changing their decisions to give the exams because I think they want the data. I think the data will be valuable because you’re looking at a year void of not having exams and not making truly data-driven decisions.

“We’re excited to have the opportunity to show that continuation of learning has happened,” he continued. “I hope they don’t change their mind in the spring.”

Dufour commended the district for how the 2020-21 year has progressed. “The teachers embracing Google Classroom. The opportunity to get kids trained. We were really blessed by EEI Vistra, where they bought our third-grade classroom a set of Chromebooks; that’s been great. The community support we’ve had from parents, the school board, students who are remote who are coming in to make stuff up they’ve missed — it’s been a collaborative effort,” he said. “Our teaching staff has kept a positive outlook. Our parents have kept a positive outlook. We’ve just worked together — we have a common goal and a common vision, and I think that’s helped us. They’re very understanding and very glad and knowing they’re blessed that we’re one of the few districts in the area that’ve been able to pretty much keep our doors open from the beginning of school to Christmas.

“It’s been a different year for everybody — across the nation, across the state,” he continued. “I just know that our educators in our district are putting the time and effort to make sure our students are successful. I’m very proud of them.”

Massac Unit 1 School DistrictInformation provided through the school report card is either collected by ISBE or uploaded yearly by the school district. It’s those numbers that catch Hayes’ attention. But because of COVID, much of that for 2019-20 is skewed.

“This year isn’t really as telling because so many things — Illinois Assessment of Readiness tests, SATs — were dropped last year,” Hayes said. “It’s a unique situation this year because most of the stuff we’d really look at and target for improvement or communicate success about is not there. Some of the stuff we could have hung our hat on, you’ve got to take it with a grain of salt because we have that whole period of COVID there in March and April. For example, our chronic absenteeism (defined as a student being absent for 10% of the school year) improved last year, but the whole last quarter kids weren’t showing up for school anyway so attendance was probably skewed. It’s really hard to make any meaningful assumption from the data. Even the graduation rate is impacted by COVID.”

Report card information impacted by COVID is designated by a yellow triangle with an exclamation point.

“This year is kind of like the firecracker that didn’t explode because there’s not much there except the bare bones stuff” like the pupil-teacher ratio, teacher retention, the average salary and teacher evaluations.

Hayes said one item he was looking forward to with the 2019-20 report card was how the district’s seven schools fall under the summative designation put in place under the Every Student Succeeds Act (ESSA), which took the place of No Child Left Behind. The summative designation provides a snapshot of how schools are doing based on attendance, test scores, survey participation and other indicators.

“Summative ratings started four or five years ago with the first numbers released in either 2016-17 or 2017-18,” Hayes explained. “When we left No Child Left Behind for ESSA, every state had to come up with different systems of accountability. Illinois’ system is the summative designations for schools. The school report card communicates that to the public.”

In 2018-19, six of the Unit 1’s seven schools were “commendable,” meaning a school has no underperforming student groups and a graduation rate greater than 67% but the performance was not in the top 10% of schools statewide. The seventh school, Unity Elementary, was labeled “exemplary,” meaning it was performing in the top 10% of schools statewide with no underperforming student groups.

“We thought we’d have a shot of making another exemplary with the 2019-20 test scores, but that didn’t happen,” Hayes said. “We’re pretty proud of our schools. It’s hard to get exemplary.”