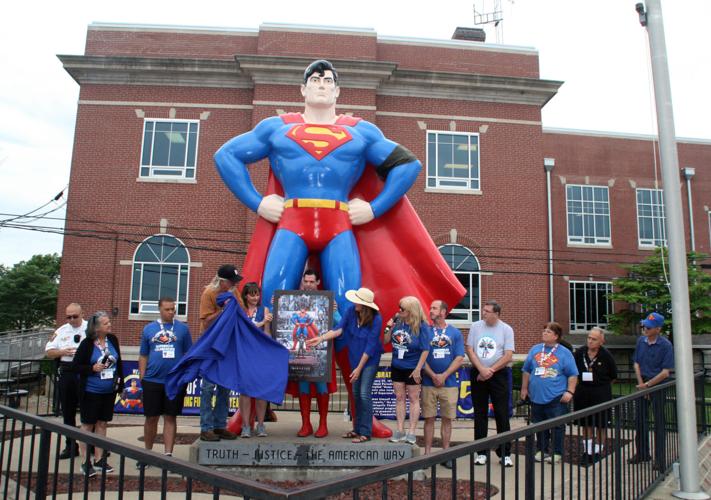 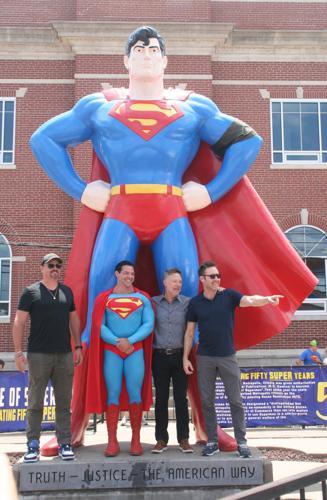 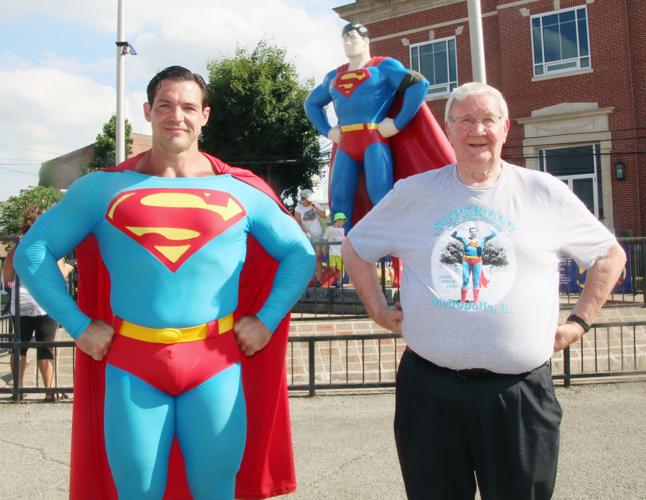 The City of Metropolis’ first and current Supermen pose near the statue. Dr. Charles Chandler (right) portrayed the Man of Steel during the Jan. 21, 1972, “adoption” ceremony. Josh Boultinghouse has been Metropolis’ official Superman since 2008. 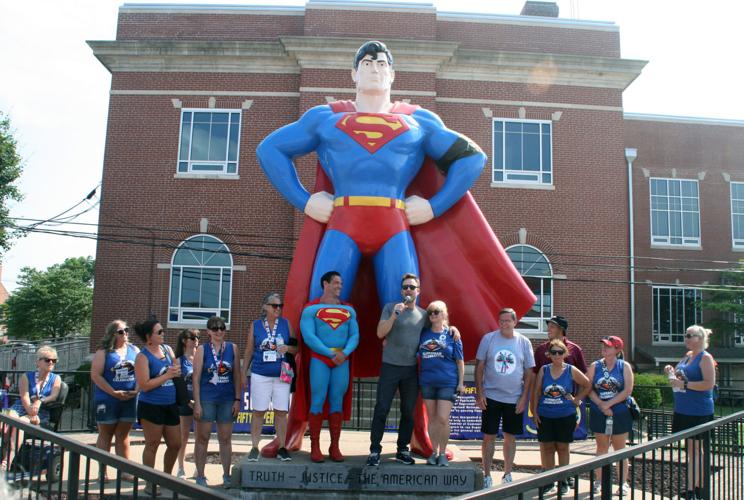 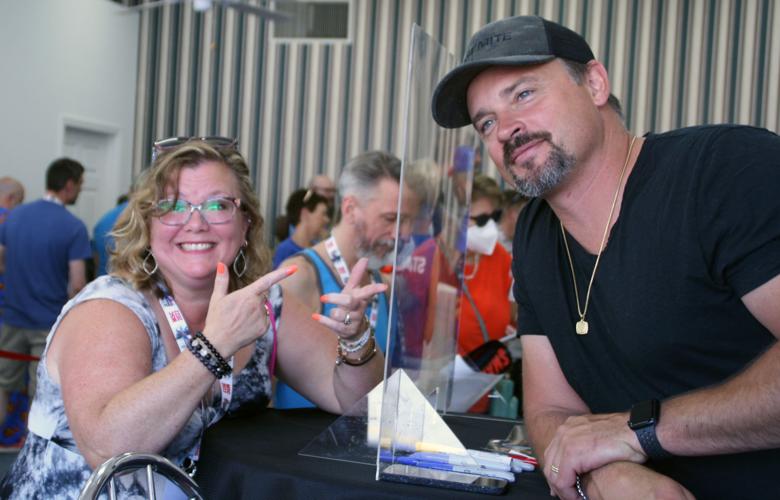 “Smallville” fans from around the globe descended on Metropolis on Saturday, June 11, to meet Tom Welling, who portrayed the series' lead Clark Kent, during the 44th annual Superman Celebration. 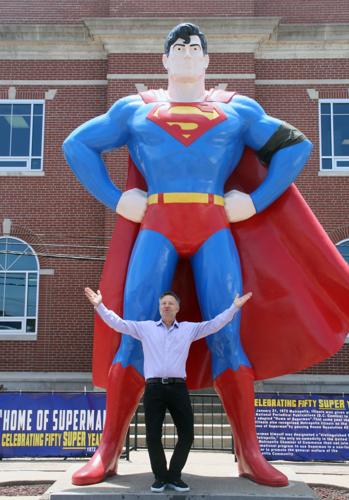 George Newbern receives a warm welcome at the Superman Statue prior to his Q&A on Friday, June 10. Newbern provided the voice of Clark Kent/Superman on the Cartoon Network series “Justice League,” “Static Shock” and “Justice League Unlimited.”

The City of Metropolis’ first and current Supermen pose near the statue. Dr. Charles Chandler (right) portrayed the Man of Steel during the Jan. 21, 1972, “adoption” ceremony. Josh Boultinghouse has been Metropolis’ official Superman since 2008.

“Smallville” fans from around the globe descended on Metropolis on Saturday, June 11, to meet Tom Welling, who portrayed the series' lead Clark Kent, during the 44th annual Superman Celebration.

George Newbern receives a warm welcome at the Superman Statue prior to his Q&A on Friday, June 10. Newbern provided the voice of Clark Kent/Superman on the Cartoon Network series “Justice League,” “Static Shock” and “Justice League Unlimited.”

You never know what surprises will come during the Metropolis Superman Celebration, much less at its closing ceremony — not only were the renovation plans for the Superman Statue announced, but MSC team members were joined onstage by super guest Michael Rosenbaum.

“I just want to say thank you to everybody who came out,” said the “Smallville” actor and the possibly the first MSC guest to be part of the closing ceremony. “You guys are the kindest people. You really know how to have fun. I love Metropolis, it's like a new home for me. I hope you invite me back. I had a great time here. Give it up for yourselves for coming out every year and supporting this.”

“For the ones who have been coming every year for years and years, thank you. Thank you for supporting us. Thank you for coming out every year, for telling your friends, your families,” she said. “We have so many people who come the first time. Once you come that first time, you're hooked. And every time you come back, you're bringing a larger and larger entourage, and you spread the word. That is the best advertisement for us, and we thank you for that. We so appreciate that.”

“We had hoped to have the statue renovation done this year. Sadly, it did not get completed,” Ogle explained during Sunday's closing ceremony. “We had a delay on the last load of bricks. When we get the bricks here, we’ll get them installed and we'll finish the base area. We've run into some issues — Superman is leaning, maybe just a little bit, and we have a sidewalk drop — so we need to get some experts in here to see what can be done. That added a little element we wren't prepared for. We want to do this right and really make this guy shine on what will be the 30th anniversary of this Man of Bronze.

“We are very proud to be the Home of Superman and celebrating our 50th year. What an amazing celebration this year was,” she continued. “We look so forward to having everyone back next year.”

With sunny skies throughout the weekend and dozens of memory-making opportunities, “all in all, MSC 2022 will go down as one of our best years to date,” Ogle said.

“The weather couldn't have been more perfect,” she continued. “We had the potential for storms on Friday morning and Sunday evening, but the storms passed around Metropolis and triple-digit heat waited until after the Superman Celebration was over.”

With attendees from literally around the world — Australia, Japan, China, Madagascar, Russia, England, Germany, Ukraine, Greenland, Mexico, El Salvador, Honduras, Costa Rica, Colombia and Bolivia — and the United States — from Connecticut to Hawaii — “the crowd exceeded our expectations,” Ogle said. “We were thrilled with so many states and countries represented, but also with the number of first-time attendees. Many of the first-timers didn't know what to expect until they arrived, but had nothing but praise on the events, entertainment, guests and activities.”

Chandler was present at the Superman Homecoming ceremony in 1972, portraying the Man of Steel in George Reeves' Superman suit from his portrayal during the 1950s television program “Adventures of Superman.”

“To pay tribute to our 50th year, the 2022 MSC shirt design was the 1972 image of Dr. Chandler bending a rod,” Ogle said. “Dr. Chandler didn't know his image had been chosen to be the official shirt design, and it was a wonderful surprise to him.”

Welling was joined by four-time celebration guest Rosenbaum, who portrayed Lex Luthor on “Smallville.” Among the first for this year's celebration was the selling out of all of their autograph sessions on Saturday.

That evening, the acting duo hosted “Smallville Nights,” a special event which also sold out with 249 attending, their largest audience since beginning the event in 2019. During the evening, the “Smallville” co-stars performed scenes from the show and called audience members to help act out the scenes and be directed by them.

“Smallville Nights” was held in the gym of the former Metropolis Junior High School, which is currently the Southern Seven Head Start. The setting provided its own theme which was enhanced with attendees being greeted by signs, banners and two cosplayers dressed as a cheerleader and football player from Smallville High School before entering the gym. Three SHS cheerleaders ran in and did a choreographed dance routine to start the show.

“'Smallville Nights' was full of great moments and huge laughs with the two celebrities walking through the audience and interacting with them,” Ogle said.

The celebration's fourth guest, George Newbern, who provided the voice of Clark Kent/Superman on the Cartoon Network series “Justice League,” “Static Shock” and “Justice League Unlimited,” joined Welling and Rosenbaum at the Superman Statue prior to their Q&A on Saturday. Newbern's Q&A on Friday was a walk thorough his career, which includes “Designing Women,” “Father of the Bride” and “Scandal.”

Ogle said she had heard from all three super guests, Welling, Rosenbaum and Newbern, about the hospitality of everyone they encountered and what a nice time they had.

Another highlight for Ogle was Optimus Prime. The only fan-built replica of the truck first unveiled in the cinematic film “Transformers: Age of Extinction” was on display beside the statue. Fans could get their photo taken beside the truck, and, several times throughout the day, Optimus Prime would “speak” to the crowd. “It was incredible to see,” she said.

Ogle noted that the artists and writers set up at Artist Alley & Writer’s Way “all reported a great year with the flow of fans and the sales of their prints, commissions and books.”

Look for more Superman Celebration photos and stories in future editions of the Metropolis Planet.