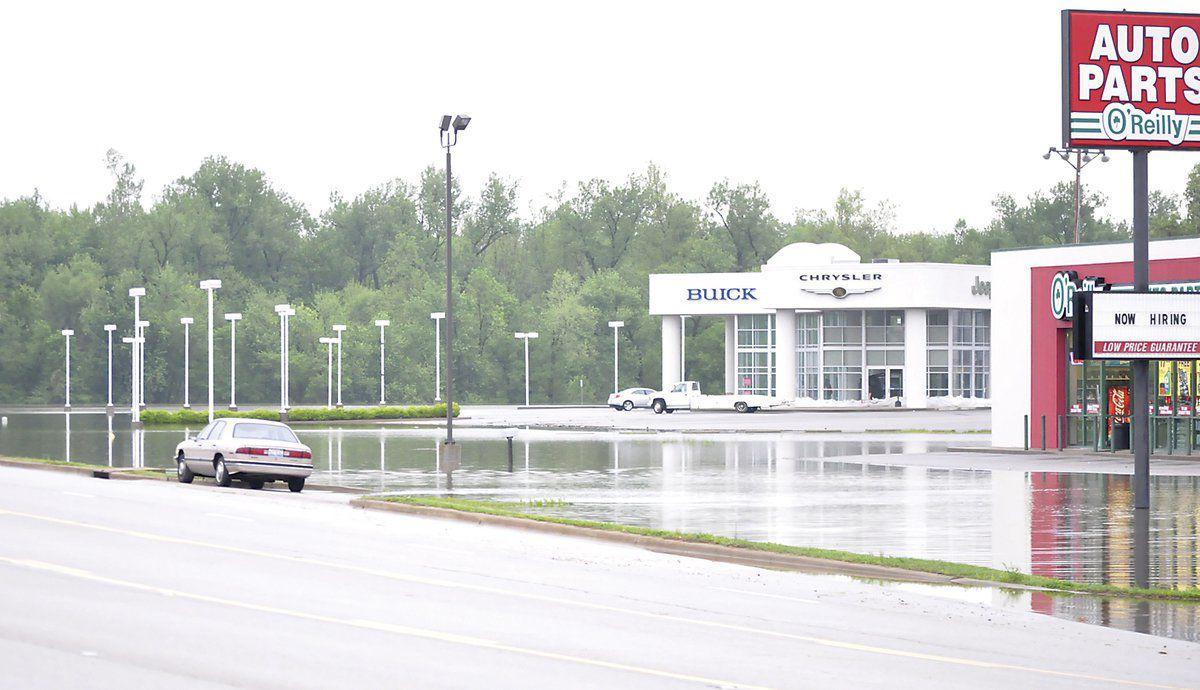 During the spring flood of 2011, the floodwater backed up into Massac Cree, rising so high it spilled over into the lot of Linwood Motors. 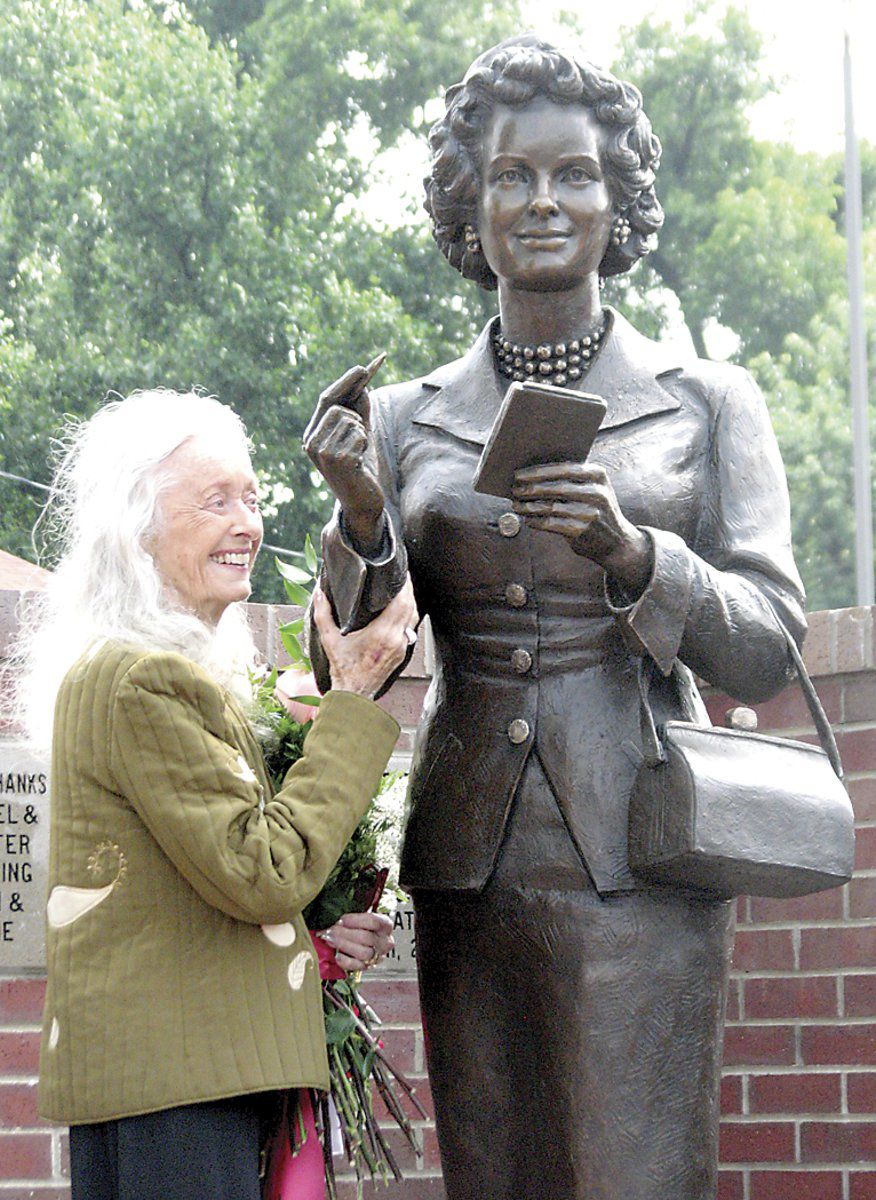 The late Noel Neill, the actress who portrayed the fictional character Lois Lane in the 1950s television series "Adventures of Superman," is all smiles in June 2010, when she unveiled the Lois Lane statue during the Superman Celebration.

During the spring flood of 2011, the floodwater backed up into Massac Cree, rising so high it spilled over into the lot of Linwood Motors.

The late Noel Neill, the actress who portrayed the fictional character Lois Lane in the 1950s television series "Adventures of Superman," is all smiles in June 2010, when she unveiled the Lois Lane statue during the Superman Celebration.

We've given our readers a look back at what happened last year in 2019, but with a new decade ahead, here is a glance back at some of the highlights from the past decade in Massac County.

The 1892 Bank building, which sits at Third and Ferry streets threatened with a demolition order due to unsafe conditions, was bought by Jim Hambrick, who planned to apply for grants to restore the building and its historical integrity.

In April, Save the Massac Theatre members joined with the City of Metropolis to pay for a feasibility study verifying condition of the structure and possibility of reconstruction. Later the Massac Theatre was named to Landmark Illinois' 10 Most Endangered Historic Places.

In April, Metropolis Planet employees and friends of Editor Emeritus Clyde Wills, joined forces with Be The Match to host a bone marrow drive in honor of Wills, who was fighting leukemia. Forty seven people became a part of the registry through the drive.

In May, 100 volunteers sandbagged in Brookport. Also, that month ground was broken on the George Rogers Clark Discovery Trail at Fort Massac State Park. It is a nine mile hiking and biking trail, which goes from the Superman Statue in Metropolis to the Brookport City Park.

During the annual Superman Celebration in June, Hollywood actress Noel Neill unveiled a Lois Lane Statue, in her likeness. The statue came after about five years of work on making it a reality.

Metropolis moved to establish three new tax increment financing districts offering tax breaks as incentives for those businesses to locate in areas near 12th street and U.S. 45, U.S. 45 and Interstate 24 and one near the industrial park.

As a lack of progress halted negotiations on a contract that had expired a week before at the Honeywell Metropolis Plant, approximately 256 union members were locked out and forced to leave the plant on June 28. Negotiations were sporadic over the rest of the year, and the lock out continued at the end of 2010.

Also during November, a proposed new business caused much discussion and controversy, as adult entertainment prepared to come to the Interstate 24 and U.S. 45 area. With no zoning regulations in place to prevent its presence, city officials declared they had no legal alternatives despite receiving petitions with nearly 1000 signatures requesting the business not to be allowed. The Pony opened quietly in December.

As 2010 drew to a close, so did a Metropolis landmark. Smallman's Restaurant, affectionately known to many as "Veach's," closed its doors after over 43 years in business, as owners John and Linda Smallman retired.

Brenda Westbrooks, Metropolis city clerk for 24 years, retired and Jan Adams was appointed to fill the remainder of the term.

A hydrofluoric acid release at Honeywell raised concerns. Plant officials stressed it was confined to the plant and emergency response procedures and equipment functioned as designed. Locked out union members expressed concerns workers inside the plant were in experienced and the community's safety was a risk.

The biggest event of 2011 came in April and May. Floodwater was high in March, but true flooding came at the end of April, along with wild weather including thunderstorms, hail and high winds. Sandbagging sites were established at Massac County High School, the old Clark Elementary School site and the Massac County Fire Station. Hundreds of volunteers and National Guard members filled and delivered sandbags and assisted in erecting make-shift levees to protect homes and property. Flooding continued into May as businesses and homes along the Ohio River were evacuated.

In July, Metropolis' recycling bins were closed and removed as potentially hazardous items were found on a regular basis. Along with expected recyclables, were ammunition, horse manure, tires, batteries and other unacceptable items.

Honeywell donated and installed eight emergency sirens in the county in July.

Fort Massac State Park was the site of a candle light service on Sept. 11, to commemorate the 10th anniversary of the Sept. 11, 2001 terrorist attacks.

Sunday liquor sales became reality, as the City of Metropolis passed an ordinance allowing liquor by the drink when purchased with food. Establishments with liquor license became eligible to apply for an additional Sunday liquor license if at least 50 percent of the business sales were from food.

Metropolis celebrated the Steamboat Bicentennial with tours of a towboat and of the Curtis Home, a steamboat photo display, bike trek and concert. The event was capped off with a dinner cruise and entertainment on the replica sternwheeler the Belle of Cincinnati.

The reconstructed fort at Fort Massac State Park was closed due to the flood and structural damage and remained closed at the end of the year with no word on when funds would be available for repairs.

In January, the Massac Theatre on Fifth Street, built in the 1930s, currently owned by the city, went up for sale. Larry Ward, manager for actress Noel Neill, purchased the theatre after a 7-2 city council vote to approve the sale.

In February, in an effort to help the 2012-13 budget, the City of Metropolis put its city scholarship program on hold. It began in 1993 when the gambling boat came to town. The program will continue, if money becomes available.

Metropolis Chief of Police Mike Worthen retired and was replaced by Harry Masse, who came to the department with 34 years of law enforcement experience.

An EF2 tornado grazed Massac County on Feb. 29, while an EF4 tornado touched down in Harrisburg, in Saline County.

Massac County Girl Scouts gathered at Fort Massac State Park to celebrate its 100th anniversary. They commemorated the occasion with an aerial shot of the scouts forming the number 100.

The first layoffs of the year came when Lafarge North America announced the shut down of the plant's kiln two, due to the continued challenging economic environment. Thirty six employees were laid off immediately. They have continued operating kiln one and the quarry located in Cave-In-Rock.

In March First Baptist Church held its final service at its Sixth and Girard streets location and concluded the service with Pastor Emeritus Louis Brinker locking the doors. After 141 years and two buildings on that corner, the congregation will worship at its new sanctuary on Massac Creek Road.

Tracie Berry resigned from the Massac Unit One School board, citing medical reasons. Mike Blasdel was appointed to replace her.

The Metropolis City Council drafted a resolution objecting the placement of a coal terminal on the Kentucky banks of the Ohio River, directly across from the City of Metropolis. Four Rivers Coal Terminal had been trying to place a facility there since 1992.

The U.S. District Court in Benton, ruled in favor of the City of Metropolis in the Metro Pony LLC versus City of Metropolis lawsuit, and the city can now enforce its sexually oriented business ordinance, which passed on Feb. 11, 2011.

In May, Honeywell Metropolis suspended its operations, shutting out union and non-union employees immediately. The decision was made after discovering damage to certain equipment in the plant. Though the company would not speak about where the damage was, the Nuclear Regulatory Commission (NRC) was on site to inspect.

Gary Towler, of Normal, pleaded guilty to seven felony counts for violations of Pre-Need Cemetery Sales Act and the Cemetery Care Act relating to the operation of Metropolis Memorial Gardens, which he was the former president and sole shareholder. His sentencing was scheduled for June 27.

Massac County Commissioners received a $15,000 grant to be used strictly for courthouse renovations. Projects included installation of a wheelchair ramp at the east entrance of the courthouse and a handicapped accessible bathroom.

After 39 years of service Pat Shelby retired from driving a bus for Franklin Elementary School.

In June, Save the Massac Theatre Organization began its journey to restoration with a new roof on the theatre.

The community was hit with more layoffs when Electric Energy Inc. announced a staff reduction of 25 contract and 19 managerial positions by mid-August.

United Steelworkers local 7-669 received news they would return to work at Honeywell on July 1.

In July, Nationwide Glove Company permanently shut their doors on July 16. The landmark Metropolis business had been in business since 1978 and employed less than 10 people at the time it shut its doors.

In August, Massac County Sheriff's Office arrested five people in relation to two active meth lab busts, which were made over a three-day time span.

In September, after suffering a building loss from a fire in early spring, Upper Salem Baptist Church merged with Weaver Creek Baptist Church. The two congregations had worshipped together since the fire in May.

Massac-Metropolis Port District, with support from the City of Metropolis, announced it was purchasing the Ingram Barge property. Ingram Barge had planned to move its operations to Paducah after acquiring the former U.S. United Barge Line in Metropolis. The 20-acre riverfront property would allow the building of a Metropolis river port. However the announcement was premature, as a change in Ingram's internal business plan allowed for their operation in Metropolis to continue and the Port District did not receive the land.

In October, the Metro Pony dropped the appeal to the U.S. District court in the case of Metro Pony LLC versus the City of Metropolis on the belief the city's sexually oriented business ordinance was unconstitutional.

Sentencing finally came for Gary R. Towler, of Normal, in his case involving seven felony counts relating to his operation of Metropolis Memorial Gardens. Towler was sentenced to serve 120 days of jail time and to pay restitution of $62,449.

The NRC issued a confirmatory order to Honeywell, which outlined actions the company needed to take before it could resume operations. During an inspection in May, the NRC concluded that should a tornado or major earthquake happen, there would be a higher risk to the public than previously thought if there was a leak of uranium hexafluoride.

Massac County Treasurer Floyd Sullivan announced he would retire on Dec. 28 due to health reasons.

The Lady Patriots golf team brought home a state trophy for the third time in seven years. Coach Kim Futrell has lead the girls to the state tournaments all six years she has been head coach.

In November Metropolis celebrated the opening of Daily Star Comics, owned by Will Bruhn, a Superman fan who moved to Metropolis in June, after visiting past Superman Celebrations.

Jonathan and Susan Russell, of Harrisburg, bought the former Pat's Market in Brookport and re-opened it as Barney's Market.