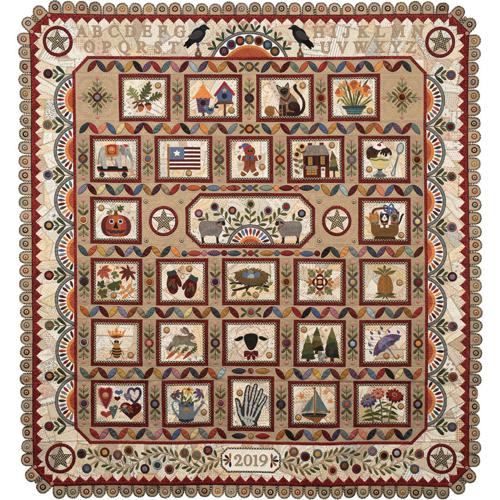 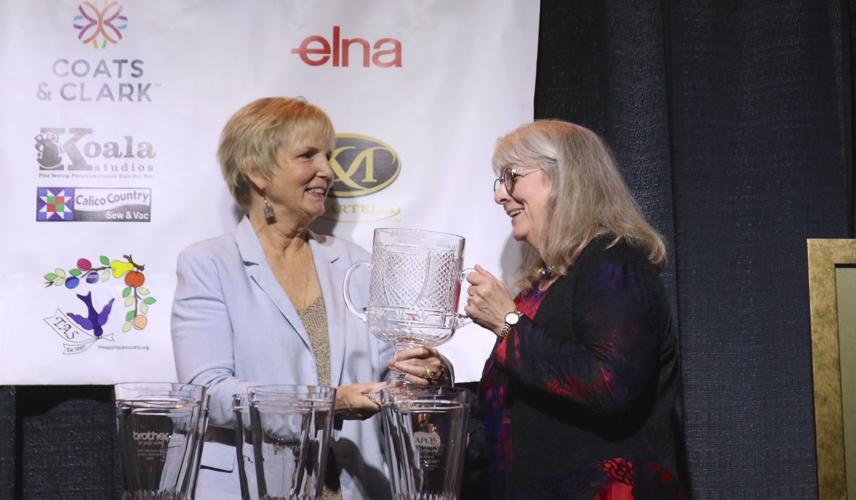 Ann Hammel, at left, executive editor of American Quilter Magazine, hands the trophy for Best of Show for the Paducah American Quilter’s Society Awards to 2022 award recipient Janet Stone, of Kansas, during a presentation Tuesday at Walker Hall in downtown Paducah.

Ann Hammel, at left, executive editor of American Quilter Magazine, hands the trophy for Best of Show for the Paducah American Quilter’s Society Awards to 2022 award recipient Janet Stone, of Kansas, during a presentation Tuesday at Walker Hall in downtown Paducah.

PADUCAH — Quilters from all around the globe were honored at the Paducah American Quilter’s Society Awards Presentation on Tuesday at Walker Hall. About $126,000 in prizes was awarded to the winning artists.

Attendees oohed and aahed at the award-winning quilts as they admired the skill and handiwork that went into making each piece of art.

Janet Stone, of Overland Park, Kansas, was awarded the 2022 Best of Show Award for her quilt, “Crazy Four Ewe.” Stone also won Best of Show at the AQS QuiltWeek in Paducah in 2017 and 2019.

“I have not planned any of this. I’m really constantly overwhelmed at the attention that my quilts get,” Stone said.

Stone said she began quilting in the late ‘90s. She finds time for her quilting passion and works around her full-time job as a box office manager at a dinner theatre in Overland Park, located just outside of Kansas City.

Quilting started as a way for Stone to keep busy with handiwork and fill empty spaces in her home. The first time she entered a quilt in an award show in 2008, she won an award, along with a check for $750. From then on, she was hooked on entering quilt shows.

All of Stone’s quilts that she enters for awards are alphabet-themed. Her mother was in the printing business while Stone was growing up. Stone would look over typeface catalogs and was mesmerized by how many ways one could design the alphabet.

Stone has been working on an alphabet series of quilts and making one quilt for a total of 26 when the series is completed. This year’s Best of Show quilt, completed in 2019, was the 20th of her alphabet series.

This award checked off a bucket list item for Stone. She knew that renowned quilter Susan Cleveland, whom Stone is a big fan of, was hosting the award presentation, and the ceremony was being hosted on the 26th, the number of letters in the alphabet.

Stone winning Best of Show on top of all of that made this award the “pinnacle” of her quilting career, she added.

Meredith Schroeder, founder of AQS, was also present at Tuesday’s award ceremony, and took time to congratulate Stone on her achievement after the ceremony ended.

Schroeder said she was excited for AQS QuiltWeek to return to Paducah after it was called off in 2020 and 2021 due to COVID-19. To her, seeing the QuiltWeek attendees is like catching up with old friends.

“It’s so good to see everybody. Most of these people I’ve been seeing every year for years, and we missed, you know two, three years. It’s great to have it back, good to see the people,” Schroeder said.

Schroeder said she is also excited to see her grandson, Bill Schroeder III, take over as president of AQS. She said selling the company to her grandson kept the business in the family and kept AQS in Paducah.

This will be Bill Schroeder III’s first QuiltWeek in Paducah since taking over as AQS president last year.