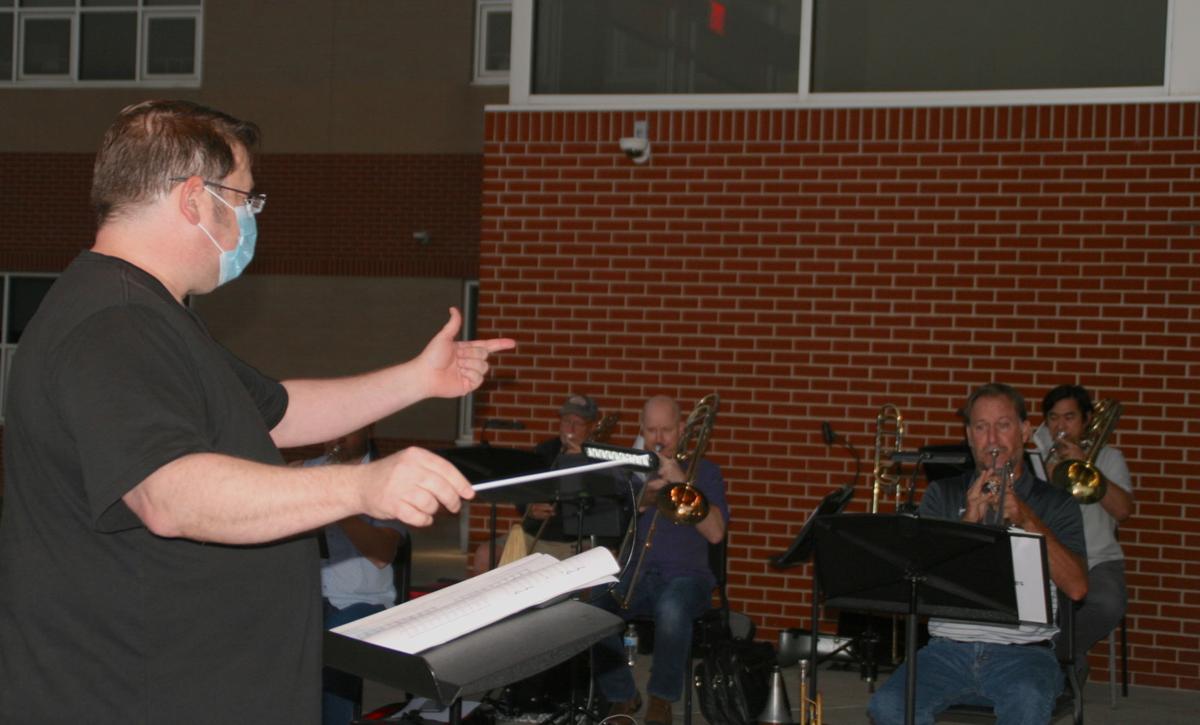 Lee Sanders guest conducts the Paducah Symphony Orchestra’s brass ensemble on “Four Rivers Fanfare,” a piece he wrote for them. 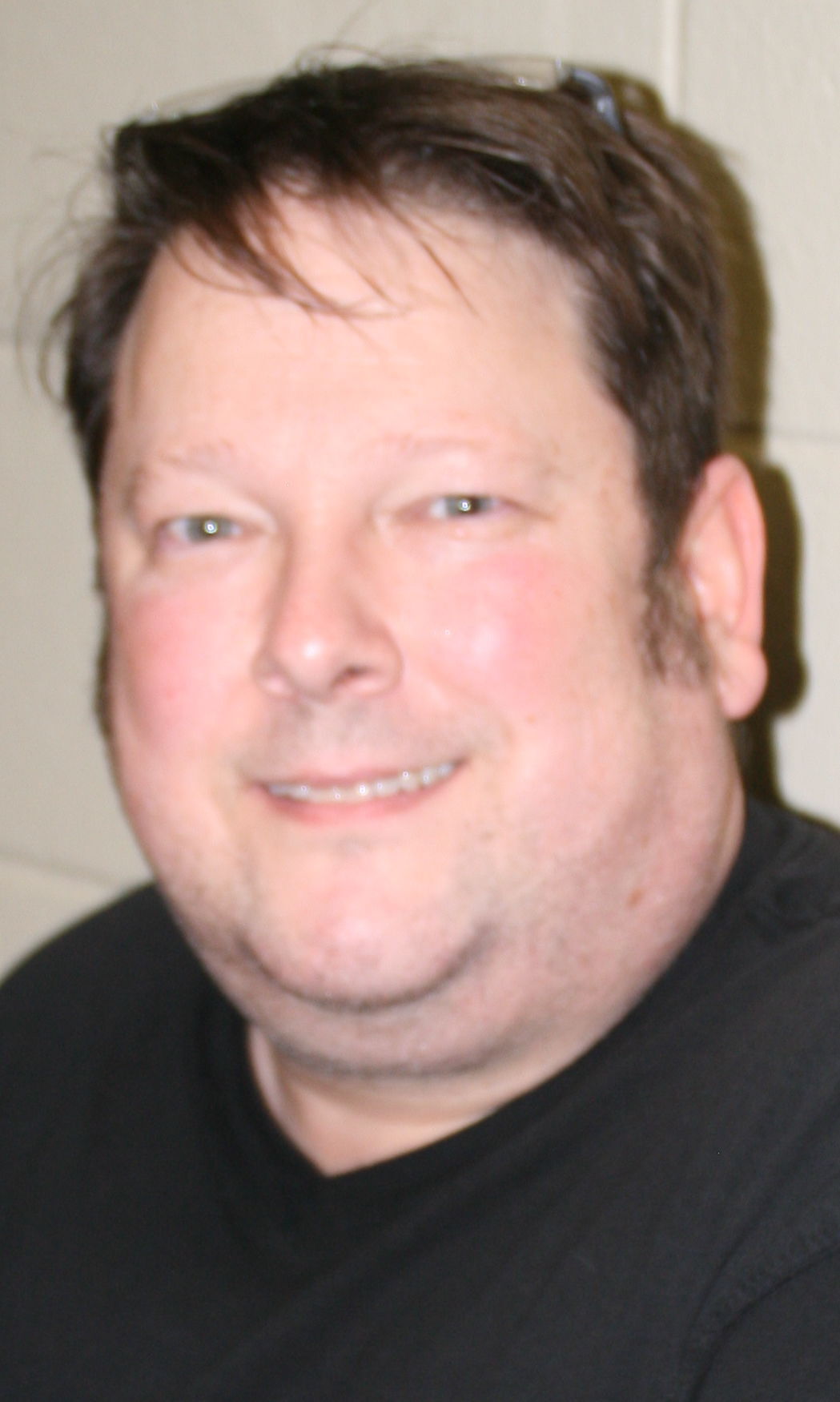 For Lee Sanders one of the thrills of being a composer is hearing a piece he’s written being performed live.

That came to fruition over the weekend when Sanders conducted the brass ensemble of the Paducah Symphony Orchestra in an original piece he wrote specifically for them.

“Four Rivers Fanfare” made its public debut at Saturday’s Brass on the Grass.

The event was the first PSO held in seven months.

“We were trying to figure out something to do within guidelines and I think our artistic director suggested a brass concert,” said Reece King, the PSO’s executive director.

“This is the first a a logical progression. Our hope is we can do our Christmas concert at the ExpoCenter since there’s more room to spread out and be back at the Carson Center in late spring, provided the guidelines allow us to do all that.”

For Brass on the Grass, King discovered he needed another song to fill the time frame.

“I happened to think about Lee because he was supposed to teach our summer camp. I thought maybe he had something, shot him an email and he ended up doing a brand new piece. I didn’t want him to do that much work, but it worked out great.”

Sanders and King met their freshman year at Murray State University, the place where Sanders began steering his career.

Sanders, the son of the late Bill and Jessie Sanders, grew up in Metropolis and graduated from Massac County High School in 1987. He now lives in Los Angeles.

He started piano lessons at age 4 and took them for 10 years. In fifth grade, he joined the school band playing the French horn through his sophomore year at Massac. The next four years, while he loved music, he didn’t play in a band setting.

Then while at Murray in 1990, he got word the university’s brass ensemble needed an additional French horn player for its Carnegie Hall concert. A lot of practicing later, he found himself in New York City and with a new appreciation for music, which eventually lead to his major.

“I’d changed my major several times and had 200 credit hours by the time I graduated (in 1993), but once I settle on music, I was going to be a film composer. I always loved music and always loved film music since ‘Star Wars.’

“I heard that and was like, ‘I want to do that.’ It was always in the back of my mind. So when I did Carnegie Hall, I got my music skills back up and got back into music. There was one thing I wanted to do, which is lucky,” he said.

After Murray, Sanders went to Indiana University from 1993-95 graduating with a master’s degree in music theory and electronic music. He then went to the one-year film scoring program at the University of Southern California.

“They had an all-star cast of big-time composers who came in and lectured. But one who taught there was Ron Jones, who became my mentor,” Sanders said.

“He hired me right out of SC to assist and do synth programming for his projects. His resume’s colossal, including some of the early Hanna-Barbera stuff, but probably his biggest claim to fame is ‘Family Guy,’ which he got shortly after I came to work for him.

“Ron was an old school guy, wrote all the notes with paper and pencil, would throw it over his shoulder and I’d program the computer to command this band of synthesizers and electronic sound to simulate an orchestra to create for playback for director approva,” he said.

“Some of the synth programming was used but most was replaced by live players when we did the recording sessions. ‘Family Guy’ was one of the very few shows at the time that had live humans playing the music, the rest were all synth.”

For the first three years of “Family Guy,” Sanders did the synth programming and some conducting.

“It was intimidating because usually we recorded at Fox or 20th because so much incredible music has been recorded there,” Sanders said.

And many of those pieces were under the hand of John Williams, whom Sanders said heavily influenced “Four Rivers Fanfare.” Sanders also listed Jones, as an influence “because I worked with him for so long, and he’s such a phenomenal composer.”

But as far as musical influences go, “I try to have my own opinion because at the end of the day, that’s what I get paid for,” Sanders said.

“The cash value of music in this day and age when there’s so much of it available isn’t a lot. The only thing that gives it real meaning is your attitude, your sensibility, whatever it is that I can bring within me.

“So I’m always trying, even if it’s something like that ‘Fanfare’ that has a very heavy debt to John Williams, I try to do things in there that reflect where I grew up, all the influences I’ve had and also be a little piece of me that I’m giving to people.”

In 2001, Sanders got his first network television show — “The Amazing Race” — after doing music for the making-of videos for “The Lord of the Rings.”

“One of my friends was the story editor on ‘The Amazing Race’ and when word got out they were looking for another composer, they told him to give me a couple of scenes to score. They gave me a half-inch video cassette tape, told me to get right on it. I said I could do it the next day,” he said.

“Somehow I got music written on that Tuesday, delivered it Friday and said, ‘Look, you’re doing a show where you’re sending people around the world in an airplane. You asked me to do it, here it is.’ That night, they said they were putting me on episodes. I was having my career moment of my life to date and nobody in the world was out partying.”

Almost 20 years later, Sanders is still the main composer of “The Amazing Race,” which is returning Oct. 14.

In addition to “Race,” Sanders has also worked on other shows, a handful of independent movies and a lot of production music, which is cut into scenes during editing for reality TV. His is also the music heard when the Sony Pictures Home Entertainment logo pops up on a DVD.

“At the time (in 2005), they were talking about doing international releasing and asked if I was interested. I did about nine different ideas and they said they were looking for something simple. The Sony exec was conferenced in, said what he wanted and I gave him literally what he sang with a few timpani notes, recorded it with an orchestra,” Sanders said.

“The contract said they’d use it for the international releasing logo and whatever else they wanted. So I’m popping in a DVD and have this moment of confusion because I wasn’t sure if it was coming from my studio — they’d used it for the home entertainment logo. My favorite thing is, you can’t skip that when you put a DVD in.”

“It’s feast or famine, but it’s always fun,” he said. “And if it’s absolutely too much, I have a team to delegate stuff to, but I try to not let it become too big — I want to have my hands in the music.”

With friends who are performers, Sanders has heard them talk about spending hours just to get a small section of music perfect.

“That was not attractive to me at all. What I was willing to put in the huge hours doing was making the stuff no one had heard before. The payoff for me is when a little while ago it was in a part of my brain and now it exists in the sound waves in the world and a few million people hear it.”

So when King asked Sanders if he had anything to contribute to Brass on the Grass, he jumped at the opportunity.

“COVID-19 having basically halted all work in Hollywood, it was a wonderful reason to get behind the wheel again,” Sanders said.“I knew what the band was and knew for that brass choir something like a fanfare would be fun and cool. This is the kind of music I love to write — a big, bold, fun style. I think especially right now, people want to hear something that’s uplifting. Hopefully I hit that metric.”

Sanders took about a week to create the 4-minute piece of music. He usually takes a couple of days for a piece for “The Amazing Race.” He submitted the piece to King on Sept. 1.

After receiving it, King asked Sanders if he’d like to come conduct it.

“Told him I’d love it. I’d done a fair bit of studio conducting and taught basic film scoring for UCLA for a while. It’s fun challenging and fun to do it in a concert setting, there’s no Take 2,” he said.

Sanders was a member of the PSO while attending Murray so Saturday’s concert was “a homecoming. I consider this my hometown orchestra. It’s a huge honor. But mostly, I look forward to working with the musicians.

“As good as I am at programming synth, and in this day and age of COVID, it just doesn’t compare to having real, living humans and creating music together. I think people are just looking forward to a feeling of normalcy and just having a group experience again.”

Friday’s rehearsal was the first time anyone had heard “Four Rivers Fanfare” performed by a live group. Sanders had to submitted a synth version to King.

“Just to be able to hear it out in the world is exciting … and terrifying,” Sanders said afterward.

“This is a good group. They want to play it great because they’re a wonderful group of artists. I’m really thrilled.”