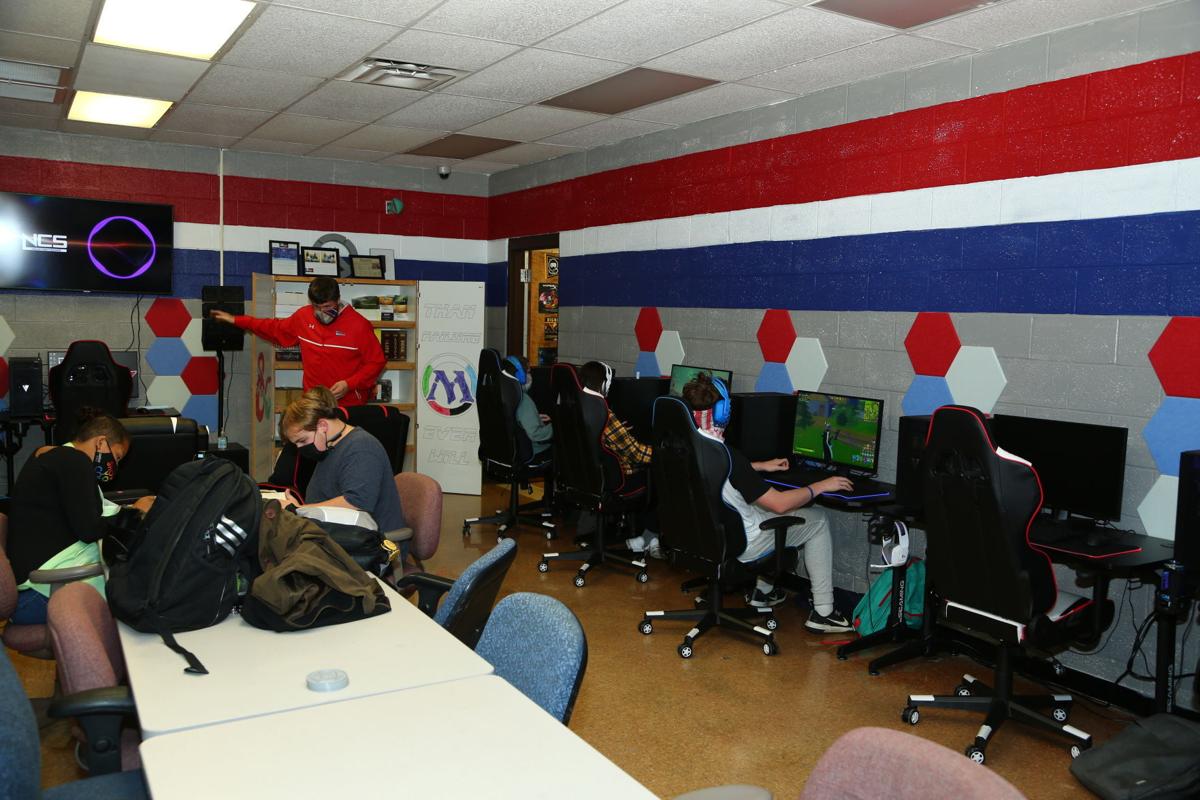 Massac County High School’s eSports Club sponsor Brock Frazier (standing) talks with a club member while others interact with similar club members from around the world. 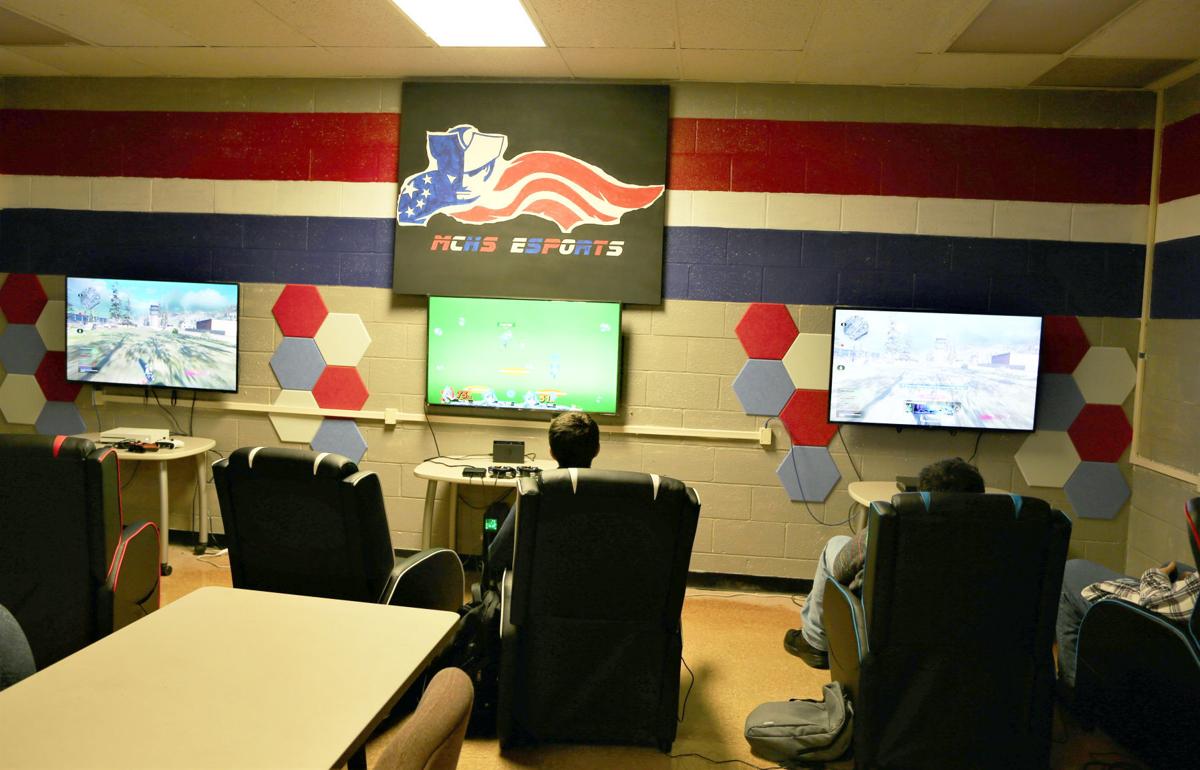 The classroom that houses Massac County High School’s eSports Club is almost always full after school. Massac’s “control center” has become the envy of other eSports programs around the state. 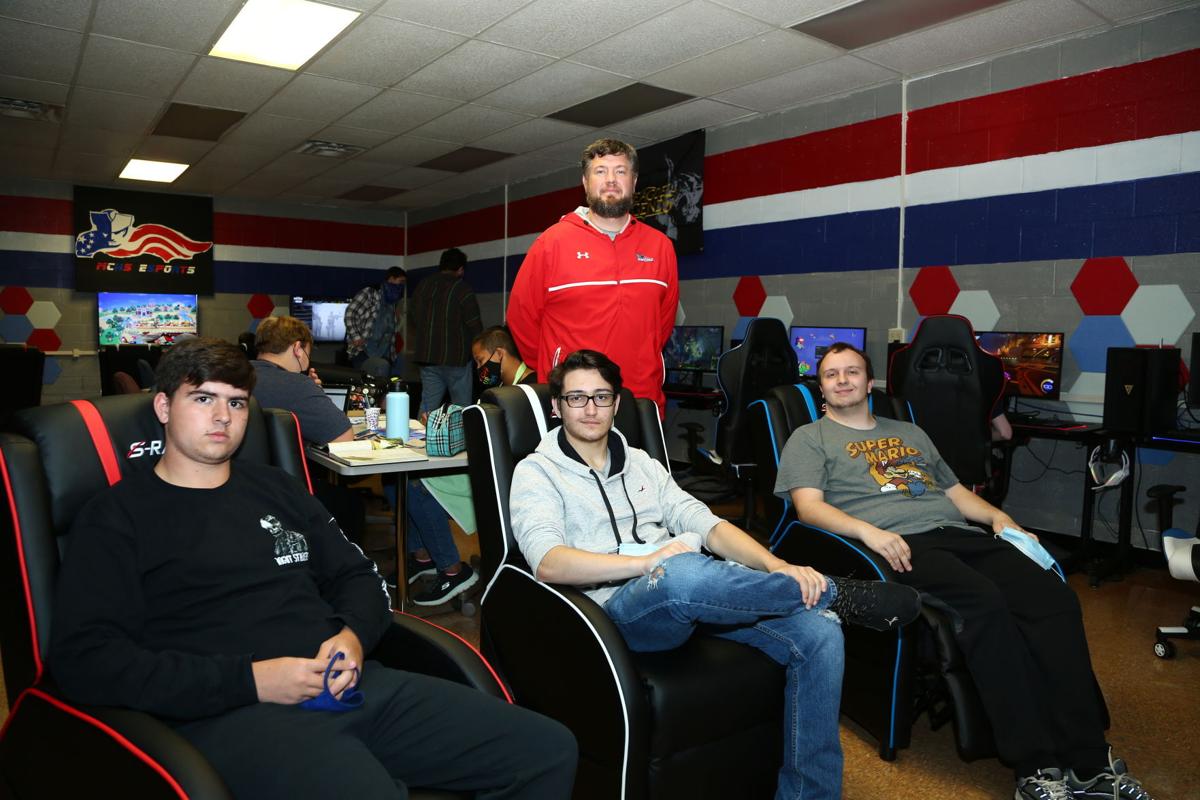 Officers of the Massac County High School’s eSports Club are (seated, from left) president Kaleb Rodriguez, treasurer Matthew Austin and media specialist Weslee Williams. It was the idea of sponsor Brock Frazier (standing) to begin the club over six years ago. 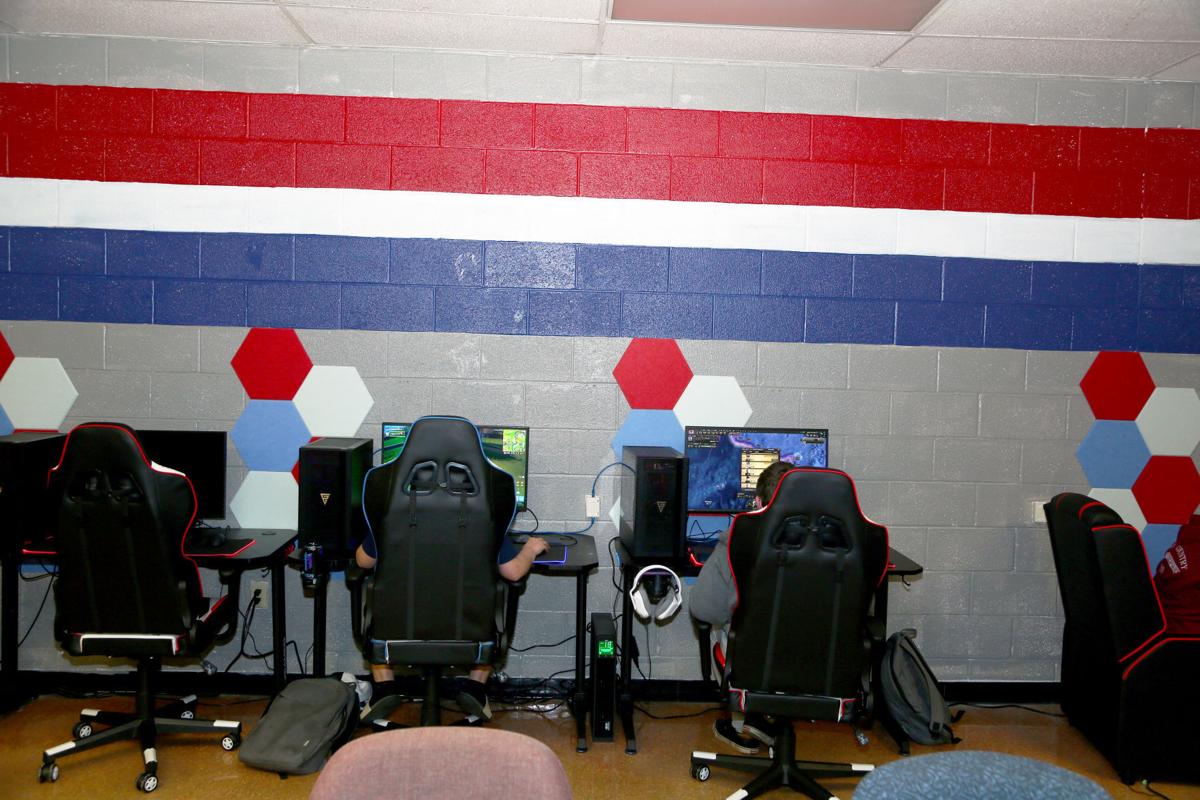 Massac County High School’s eSports Club sponsor Brock Frazier (standing) talks with a club member while others interact with similar club members from around the world.

The classroom that houses Massac County High School’s eSports Club is almost always full after school. Massac’s “control center” has become the envy of other eSports programs around the state.

Officers of the Massac County High School’s eSports Club are (seated, from left) president Kaleb Rodriguez, treasurer Matthew Austin and media specialist Weslee Williams. It was the idea of sponsor Brock Frazier (standing) to begin the club over six years ago.

“SPORT — a game, contest or other pastime requiring some skill and usually a certain amount of physical exercise.”

That is Mr. Webster’s primary definition of sport.

The second is more fitting for this exposition: “any pastime or amusement, diversion.”

eSports may not fit the first definition, but it certainly pertains to the second.

What is eSports? Pretty much what you thought it was — playing video games on a specialized “gaming” computer. Coincidentally, it is an exploding, worldwide, billion-dollar enterprise with online viewership for some of its bigger events rivaling and surpassing that of events like the World Series and Super Bowl.

At Massac County High School, it is a focal point of one staff member’s career.

Brock Frazier is listed on the MCHS staff directory as “support technology” — i.e., an IT support technician. I submit to you that Mr. Frazier is much, much more.

Frazier readily admits he was a high school dropout. At the urging of then-MCHS principal Jason Hayes, and with some help from other MCHS cohorts, Frazier went back and got his GED. Talking with Frazier is a perfect example of why you should never confuse education with intelligence.

To that end, several years ago, Frazier wanted to implement the eSports program at MCHS. At the time, he was a coach for the school — he has been involved with Massac’s soccer program since its inception — but not an employee. After he obtained the GED, his persistence on the program carried a little more weight and his pleadings with Hayes finally paid off.

“He kept telling me these kids can get scholarships for playing video games, and I kept telling him he was crazy,” said Hayes, who is now Massac Unit 1’s superintendent “Finally, after about three years, I gave in. And come to find out, he was right! I was wrong about that one.”

Frazier played football and soccer in high school, and that was about the limit of his social contacts. Those were his friends.

“If I had had something like this, I probably would have stuck around (high school),” he said.

Hayes noted the eSports Club “provides another avenue for kids who may not be particularly interested” in school or other school organizations.

That point was reiterated at the Nov. 8 Metropolis City Council meeting when Frazier brought along two of his “lieutenants” from the eSports Club. President Kaleb Rodriguez and vice president Bruce Darnell admitted they were not “public speakers” and would never have been in that particular spotlight without Frazier’s encouragement and the camaraderie and self-confidence developed within the group.

Hayes explained that the eSports Club “helps us reach another group of kids.

“These organizations — we have sports, clubs, extra-curriculars — help students succeed in school. They’re there to help student learning and student success — when you become part of an organization, it motivates you to get better grades to stay eligible to do all those things. That’s the whole purpose of those things. eSports is just another avenue. The more we can get kids involved, the more we can have success with our students,” Hayes said.

Several of “Frazier’s kids” have told him that before eSports, they had no real interest in school. “The whole Patriot thing didn’t mean much (to them),” Frazier told the city council. But, he added, becoming part of a group that works together and helps each other had made being a Massac County Patriot a real thing to them.

Frazier said the eSports program is not a remedy for social issues like “cliques” and bullying, but it does help to socialize some kids who might otherwise drift through high school with little interaction with their classmates.

Frazier noted that his contacts in the industry are always looking for kids who have developed the skill sets that are obtainable through eSports. He emphasizes team building, problem solving, critical thinking and self-confidence.

Although the program at Massac is almost 6 years old, these kids are really in on the “ground floor.” Frazier said that over 100 high schools in Illinois now offer eSports, and he has been active in the “onboarding” process with several of them. In fact, the IHSA has just this year added eSports as an “activity,” not unlike their programs for bass fishing, chess, drama, etc. In April 2022. they will hold the first IHSA State Series in three game titles.

Frazier said the Massac team had been “upgraded” in the game “Overwatch,” a game that brought them a national title, as well as a $2500 grant. They are currently ranked ninth of 37 teams in that particular competition.

One thing Frazier is extremely proud of, and rightfully so, is Massac’s top flight “control center.” The room features a new paint job (Frazier’s handiwork), 12 gaming stations, three console stations, three high tech recliners and one streaming station all thanks to Frazier’s tight-fisted shopping/bargaining, grant money from the city, the club’s “Overwatch” money and some seed money from State Farm. Frazier estimates the value of the equipment in the new room outstrips their budgeted funds by at least $5000, but through his industry connections and a little “horse-trading,” they managed to pull it off.

Frazier also is proud of his “officers.” Kaleb Rodriguez is the club’s president. Bruce Darnell is the vice president. Matt Austin is the treasurer. Weslee Williams is their media specialist. Elijah Dalla is their tournament organizer.

“They pretty much run things now, I’m here to oversee and tweak things when I have to,” he insisted.

Like with all things, moderation is key, but before you lambast your kids for too much “gaming,” consider the possibilities and get involved. Frazier and the Massac eSports program have a good thing going here, and invite you to check it out.

“He’s done a lot with eSports,” Hayes said of Frazier. “He’s gotten at least three scholarships now. That’s the crazy thing. He would’ve been doing this three or four years earlier if I’d given in. … This is all Brock. Frazier did all of it. He gets full credit for this one.”