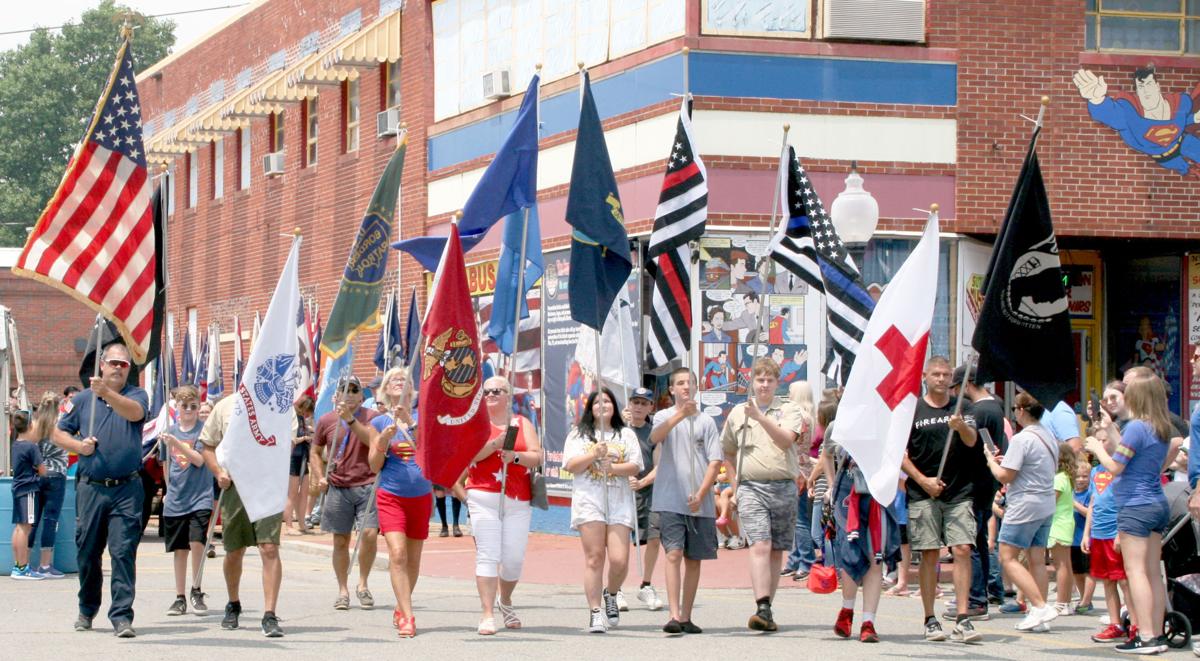 Retired Army Sgt. Troy Dunlap (far right) carries the POW/MIA flag during the processional prior to the presentation of the Patriot Flag II on July 31 during the 43rd annual Superman Celebration. 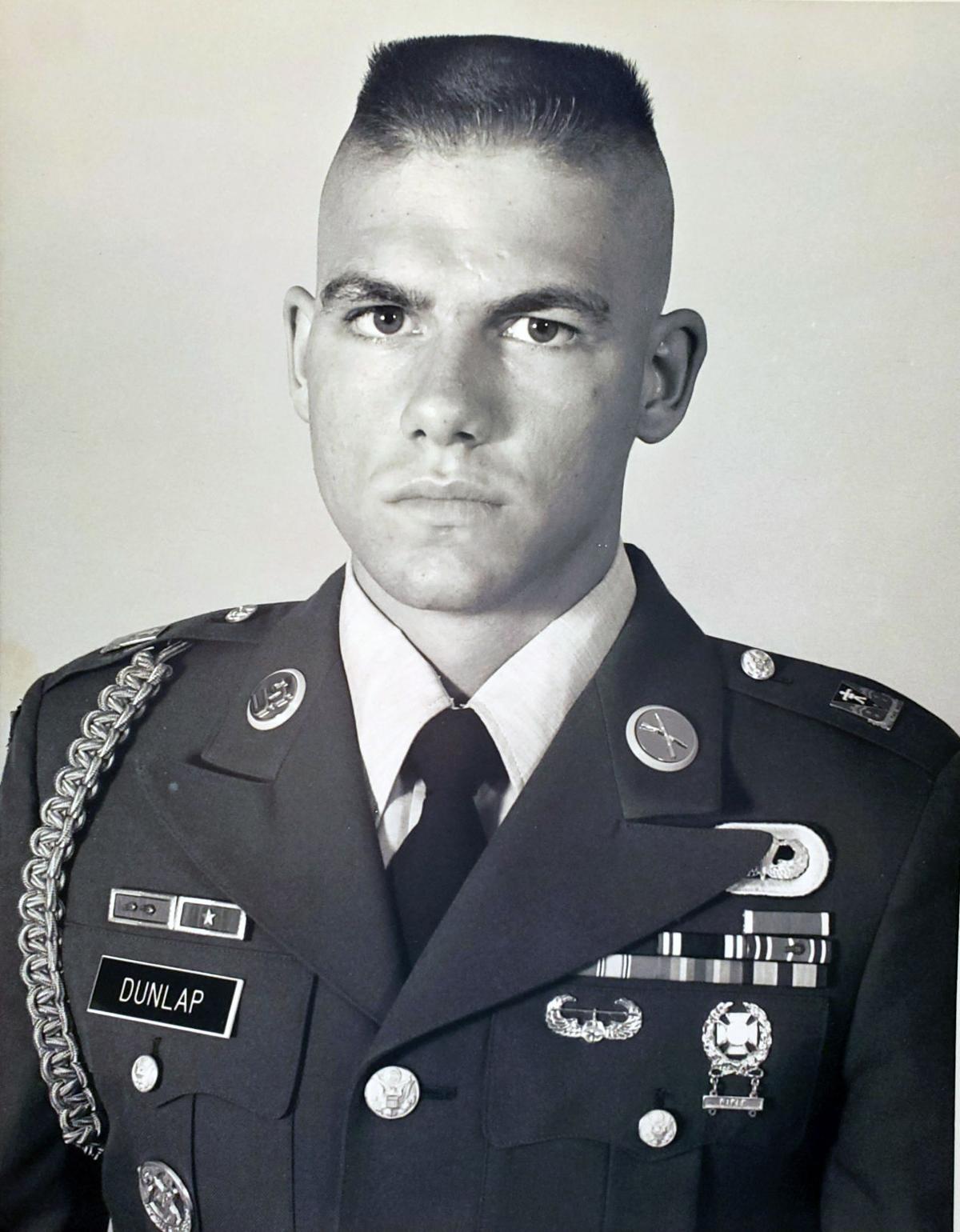 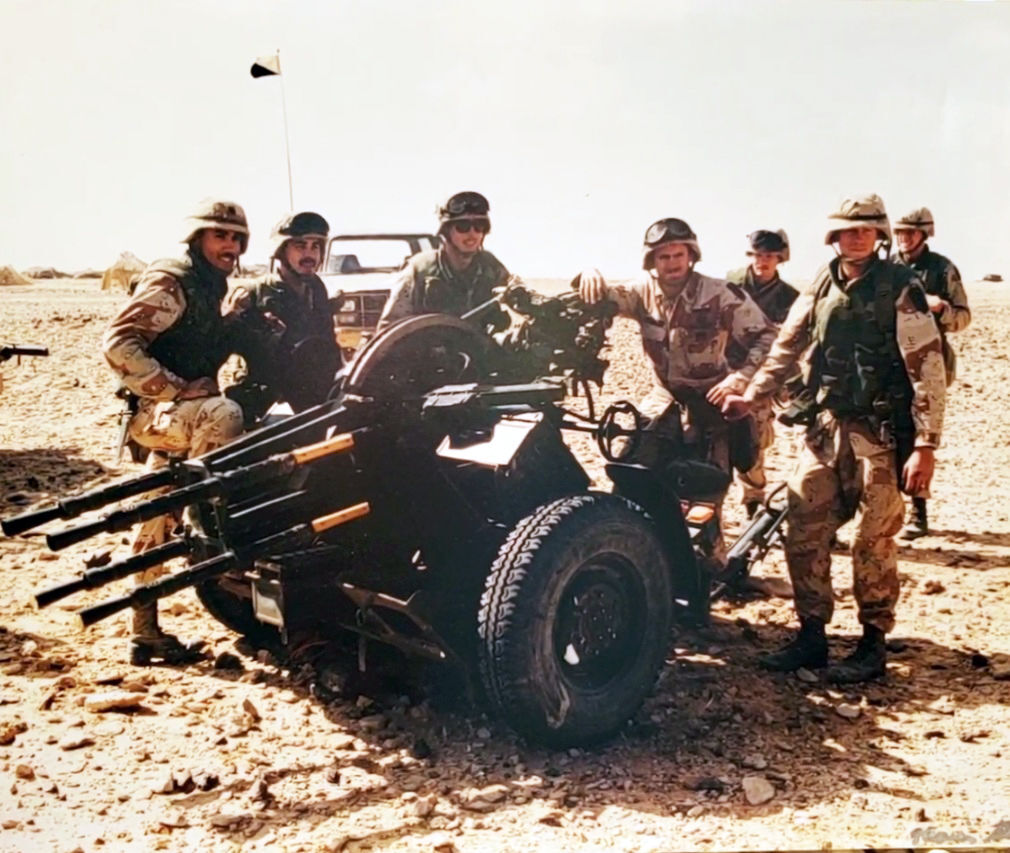 Retired Army Sgt. Troy Dunlap (far front right), two of his fellow pathfinders (far two on the left) and other soldiers pose for a photo. When their helicopter crashed, the two pathfinders were killed and Dunlap was taken as a prisoner of war. 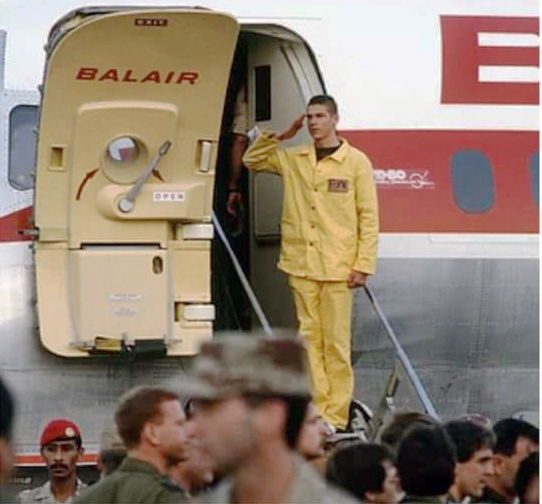 Retired Army Sgt. Troy Dunlap salutes upon landing on U.S. soil after coming back home at the end of Desert Storm. 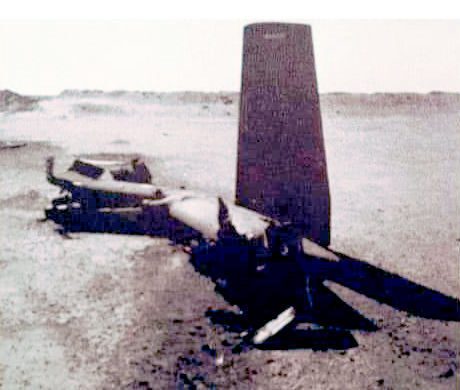 A crash site photo shows the tail boom of the Black Hawk helicopter retired Army Sgt. Troy Dunlap was on in 1991. Debris was scattered over a wide swath of desert and personnel from the 101st who combed the wreckage thought no one could have survived the impact.

Retired Army Sgt. Troy Dunlap (far right) carries the POW/MIA flag during the processional prior to the presentation of the Patriot Flag II on July 31 during the 43rd annual Superman Celebration.

Retired Army Sgt. Troy Dunlap (far front right), two of his fellow pathfinders (far two on the left) and other soldiers pose for a photo. When their helicopter crashed, the two pathfinders were killed and Dunlap was taken as a prisoner of war.

Retired Army Sgt. Troy Dunlap salutes upon landing on U.S. soil after coming back home at the end of Desert Storm.

A crash site photo shows the tail boom of the Black Hawk helicopter retired Army Sgt. Troy Dunlap was on in 1991. Debris was scattered over a wide swath of desert and personnel from the 101st who combed the wreckage thought no one could have survived the impact.

As a pathfinder in the Army, Troy Dunlap was trained to go into high risk locations and get his fellow soldiers out.

After being a part of getting 21 prisoners of war out of Iraq during 1991’s Gulf War, he never expected to be the one needing rescuing.

The son of Gail Stubblefield and Michael Stubblefield, Dunlap grew up in Joppa. The family soon moved to Karnak. Dunlap joined the Army after graduating from Joppa High School in 1988.

Dunlap comes from “a long line of military men,” including his father, who was in Vietnam, and his grandfather in World War II.

While in basic training, Dunlap decided he wanted to jump out of airplanes, which got put into his contract for what he wanted to do in the military.

“I was lucky enough to get accepted to do that,” and for his duty station, he was assigned to Fort Rucker, Alabama, where he became a pathfinder.

“We performed sling load operations where we hooked up large equipment, vehicles or weapons to the helicopter so they were swung load to wherever versus pulling them on a vehicle,” Dunlap said. “I jumped out of airplanes. I was an instructor, a jump master, where I was able to teach other people how to do it and put them out of an airplane.”

Two years into his service, America entered the Gulf War, which was a waged by coalition forces from 35 nations led by the United States against Iraq in response to Iraq’s August 1990 invasion and annexation of Kuwait. During Operation Desert Shield, which was from Aug. 2, 1990, through Jan. 17, 1991, the coalition built up troops and defense for the combat phase, Operation Desert Storm, which was Jan. 17 through Feb. 28, 1991.

As a pathfinder, Dunlap was “lucky enough to be one of five guys from our military unit to go over and issued with Apache helicopters. We did search and rescue missions for any Air Force or military pilots who were shot down or crashed their planes in enemy territory,” he said.

“Then we were shot down.”

On Feb. 27, 1991, during Operation Desert Storm, in what would be the final week of the Gulf War, Dunlap was part of an eight-member crew that was on a search and rescue mission to pick up an F-16 pilot who was shot down just outside of Basra, Iraq.

“I got added to the mission we were on at the last second. Nobody else knew I was on the helicopter,” Dunlap said.

During the search, their Black Hawk helicopter was shot down.

“I was trained during a time and era where that was possible, yet not probable, but to always to be ready for worst case scenarios. I knew when I saw the enemy’s anti-aircraft tracers outside the helicopter windows and heard them hitting the bird itself, we would be killed in the crash, if not sooner,” Dunlap said. “I said a prayer for my 6-month-old daughter to remember me.”

With the helicopter’s debris scattered over a wide swath of desert, personnel from the 101st Airborne who combed the wreckage thought no one could have survived the impact.

Three of them did — Dunlap, Rhonda Corum and Daniel Stamaris — and were taken as prisoners of war by the Iraqis. The group was moved several times, ending up in Baghdad.

“I remember the interrogators,” Dunlap said of the nine-day capture. “I don’t want to go into any detail about the treatment, but some people treated us better than others, I will say that. They’d basically ask what America’s purpose over there was because, they had told me, a long time ago, Iraq owned Kuwait and now it was time to take back what they let Kuwait borrow. They couldn’t understand why America was getting involved in it when it was a dispute between countries, as they told me.”

Dunlap said several things got him through the crash, his capture and his release.

“My fellow POWs and the good Lord got me through my captivity,” he said. “I knew I wasn’t in my situation alone — many before myself in America’s history have been subjected to far worse circumstances. I prepared myself for the inevitable, but always held out hope and faith that I was being prayed for — and I was — and God’s grace saved me in part to prayers from family, friends and Americans.

“I had hope that one day I would be free and be able to share my story with my family and friends,” he continued. “I love this country, and I would do it all again!”

Due to the helicopter damage, Dunlap and his fellow soldiers were considered killed in action by the military.

It wasn’t known the group had been captured until the war was declared over and they were released into the Red Cross’ hands in Iraq on March 6, 1991.

“I guess that’s when my mother saw me on TV,” Dunlap said.

But no one believed her.

“Everybody was telling her I was on a helicopter and got killed and they were waiting on my body to come back. She tried to tell people she saw me on TV, so she’s got pretty much everybody in the military scrambling, this crazy lady saying she saw her son. It went from there,” Dunlap said.

When he got into Red Cross custody, he able to talk to his mom for the first time. The group was soon taken to Washington, D.C., receiving treatment at Walter Reed National Military Medical Center for six days. Dunlap came home to Karnak for a couple of weeks, where family and friends held a get-together and celebration, before he returned to Fort Rucker to finish the two remaining years of his service contract.

After four years in the Army, Dunlap retired, obtaining the rank of sergeant E-5. He returned home to Karnak and soon moved to the Chicago area to work for the Illinois Department of Corrections at Stateville Correctional Center.

“I had planned on going into law enforcement, and I thought that would be a good ticket to get started,” he said. “It was the quickest and the first thing that called. Then the job turned out to be so exciting for me personally, and the pay was pretty good. The next thing you know, I’ve got 27 years there. It went by pretty quick.”

It was also a position where his time as a POW/MIA also had an impact.

“Now seeing it from both sides, I think it gave me a little bit more human compassion or empathy maybe,” he said. “Of course, most of these guys in prison created heinous crimes against humanity, so there was still that line, but I just realized it wasn’t my job to give them any punishment; my job was to make sure they stayed locked up until they satisfied the courts with their sentence and to give them what the law said they had coming.”

Dunlap retired last year as a lieutenant from Stateville, where he was an instructor for the IDOC weapons qualifications, where “I taught everybody to shoot and control their weapons.”

Dunlap met Vicki, “a Yankee girl who worked in the prison, too.” They married and have five children. Their youngest is 17.

Dunlap is currently is working part time for the Will County Sheriff’s office.

Dunlap frequently returns home to Karnak. During his July trip, he and Vicki were among those taking part in the 43rd annual Superman Celebration. That Saturday, July 31, was also the day the Patriot Flag II was being ceremonially presented to the city and the celebration’s attendees. The flag was wrapping up a five-year tour around the country in commemoration of the 20th anniversary of the Sept. 11 attacks.

Dunlap was one of approximately 120 people who participated in the presentation of the 28-by-60-foot, 50-pound flag. He carried the POW/MIA flag.

“They were looking for flag bearers because they had so many flags there that day,” Dunlap said. “One of my buddies from down there told one of the guys who was running the thing that I was a POW, and they asked if I’d carry the POW/MIA flag. At first, I didn’t think much about it, but, in my heart, it was fitting that I was carrying a flag that represented so many people who had been through what I’d been through.”

He approaches Veterans Day with a similar perspective.

“I think Veterans Day is one of the biggest days of the year,” Dunlap said. “I try go to as many ceremonies as I can. It makes me realize that every day is Veterans Day because of all the people who sacrificed so much. It gives me a sense of pride. I’m just your typical patriotic American.”