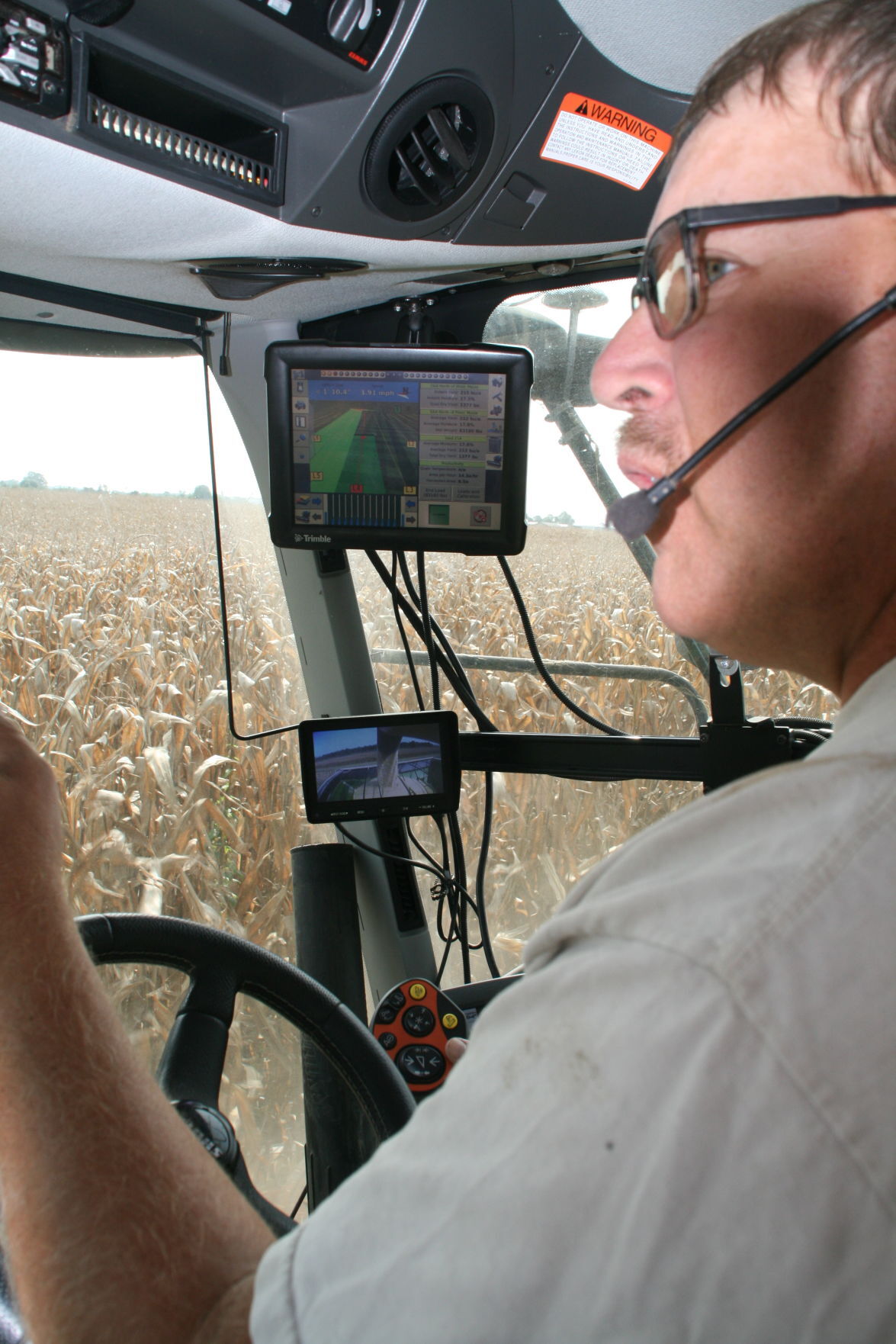 Darryl Korte discusses the harvesting process. The top monitor tells him the yield and the moisture percentage of each corn row. 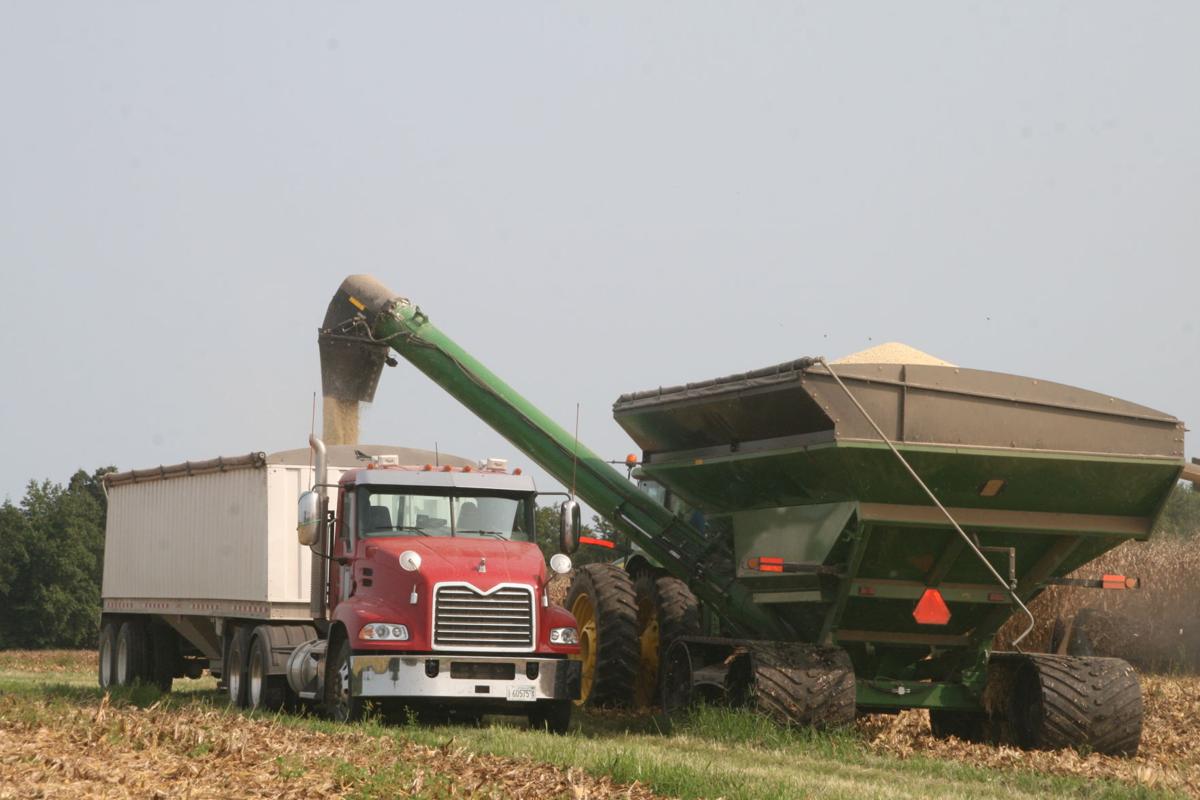 Jakob Korte drives the semi loaded with harvested 1,000 bushels corn to one of two grain bins. At the bins, the corn is dried through a grain pump method or pneumatic method to get the grain’s moisture content down to 14 1/2%.

Darryl Korte discusses the harvesting process. The top monitor tells him the yield and the moisture percentage of each corn row.

Jakob Korte drives the semi loaded with harvested 1,000 bushels corn to one of two grain bins. At the bins, the corn is dried through a grain pump method or pneumatic method to get the grain’s moisture content down to 14 1/2%.

So how does an international company like Frito-Lay get the corn for it various corn chips?

Last summer when the company’s supplier ran out of white corn, it learned Korte Farms had a supply. Representatives from Champaign came to Belknap to obtain what they needed then took it to Tennessee to be manufactured.

The family farm in Massac County is now on its fifth generation. Begun by the parents of Lester Korte, it now boasts 2,700 acres in white corn and soybeans. Steve Korte took over the business from his father, who at 95 still keeps an eye on things when he’s not bush hogging.

This month, Lester is busy watching the fields being harvested by his son Steve, grandsons Darryl and Daniel and great-grandsons Jakob and Austin, who are Darryl’s sons. Steve’s wife Norma also keeps an eye on things.

“I mostly am there for what they need — food, a ride, picking up parts,” Norma said. “I help get the bills out, especially in harvest season because that’s the last thing on their minds.”

She’s also the bookkeeper, keeping track of what’s harvested, what’s on hand and what’s sold “to make sure we don’t oversell,” she said.

Like her husband, farming isn’t new to Norma, her background’s just different: her father was a dairy farmer.

“We grew corn for feed, but we didn’t mess with soybeans very much so I’ve had to adjust, but this next year will be 50 years, so I better!” she said with a laugh.

“There at first, it took me a while because IT was a little different than what I was used to. We were done by 8 p.m. Here, they go from sun-up to 10 p.m.”

That’s especially true during harvest season. The Kortes began reaping the test plots two weeks ago. This week is dedicated to soybeans. The corn harvest will resume next week. But the cycle is ongoing.

“They’re already making plans for next spring,” Norma said. “Seed dealers have started calling. They’ll fertilize the fields when the harvest is over, as the weather permits. When it rains, they do honey-dos, catch up, fix.”

Thanks to good spring weather, the Kortes got the majority of this year’s crop planted in April. It was a better planting year than 2019, Darryl said. “Last year it was hard to get anything done in the field.”

Darryl has “always known that I wanted to farm since I was itty bitty. I didn’t know it’d be quite like this 20 years ago,” he said, as he drove combine outfitted with a yield monitor which displays a graphic of the field showing its bushel yield and moisture content.

“When I started, we weren’t weighing it on the scales either, we’d just estimate what we were bringing in; when you took it to market you actually knew. Now you know where the yield came from, how much and all that.”

Equipment size has changed. When Steve and Norma first married, “four rows was really big. (Darryl’s) taking 12 rows at a whack now” with a 30-foot corn header, she said. “Steve has tried to stay on top of things (researching) and he’s encouraged the boys to do that, too. The computer monitoring the combine was a big boom for us to do, but to stay on top of things, you’ve got to keep up. It has paid for itself — we can tell the yield better and we can check on the moisture better.”

But one thing that hasn’t changed is family involvement.

Darryl’s sons “have grown up around it. As soon as they were big enough, they were out here helping,” he said. “That’s how I started. I was running the combine when I was 10 years old.”

The Kortes’ youngest, daughter Debra, is also doing her part in agriculture working for the University of Illinois in the agricultural educational program.

“We always encouraged our sons and daughter to go on to college,” Norma said. “You never know what could happen while you’re farming, so we wanted them to have a back-up.”

A good portion of the farm ground the Kortes work belonged to Lester’s mother’s family.

“Part of the land we own has been in farming for 150 years,” Norma noted. “When my parents died, I inherited 40 acres of their land that had been farmed for 100 years by my grandparents.”

That means the Kortes and farming are into their seventh generation. “It feels pretty good that we’re still carrying on the farming tradition that our family has always done,” Darryl said.

“I wouldn’t do anything else,” Norma said.

The harvest is Darryl’s favorite part of farming. “It’s always the funnest part of the whole year because you get to go out and get what you’ve been working on all year long,” he said.

The soybean harvest takes a week. Timing is essential. “If you wait too long, the beans pop out of the pods and it’s done,” Daniel said.

For the corn, with the combine capable of doing 100 acres, the harvest is “about a month’s worth of good working days. When it rains, you can’t do anything and you may have to wait two or three days for it to dry out, that’s when you get all the delays,” Darryl said.

By this time of the season, the stalks, which are 6- to 7-feet tall, are brittle and frail. “A large wind can knock them down, making them hard to pick up and get the corn off,” Daniel said, noting the corn’s growth depends on the time it’s planted and the temperatures.

Like soybeans, the corn harvest is about timing. “If you get it out at the right time, you’ll lose less in the field and the only way you can do that is just keep checking it,” Norma said.

The Kortes use an “unload on the go” process to harvest. Darryl said they didn’t when he was younger, but it didn’t take long to see the upside. “It increases what we can get done by 30%. At the end of the day, that’s a big difference.”

When they decided to make “unload on the go” part of the process, a semi ran alongside the combine. Darryl noted the wear-and-tear on the semi and the land wasn’t worth it, so they invested in an auger, or grain cart.

Corn headers located at the front of the combine have two rollers on every row pinching the corn stalk and pulling it down. When the ear hits the header’s plates, it pops off the stalk.

“The whole idea of the corn head is to strip the ear off and only bring in the ears,” Darryl said. “If we had to run all of that through the machine, we’d have to drive a lot slower and it’d be a lot harder for the combine to handle that.”

Threshing takes place under the combine. The corn is separated from the cob, leaves and shucks. The grain ends up in the combine’s 1,100-bushel tank while the remnants are spread by the combine’s back chopper.

While all of that is taking place, an auger, or grain cart, runs alongside the combine so it can “unload on the go.” Once the auger is full, it takes its 350 bushels to a waiting semi, which can hold 1000 bushels. The filled semi takes the grain to one of the Kortes’ two sites for drying.

“You can unload the semi in about two minutes; it doesn’t take very long,” Darryl said.

Norma noted that thanks to the proximity of the fields to the grain bins, by the time the semi returns, another load is ready to go.

The corn has to have a certain moisture content. Coming from the field it’s 17 ½ to 20%.

“Every point over 20 means extra propane to dry it, so that cuts into the cost,” Daniel said. “We’ll be drying it down to around 16% then let it cool down to 14 ½%. The white corn can’t be heated as much as yellow or it’ll crack.

“We try to keep the grain as clean as possible to avoid hot spots, which would spoil it.”

Having two dryer locations, each going through about 1,500 gallons of propane in two days, “we can keep up with what we shell in a day’s time,” Darryl said. “It’s around 20,000 bushel on an average day.”

After drying, the corn is stored in grain bins. With 14 between the two locations, they can store over 200,000 bushels until it goes to the grain elevator “next winter or spring when they want to buy it and ship it out to their customers,” Darryl said.

The family works with a broker to sell its corn and soybeans. Daniel said the corn is used mostly in corn chips, tortillas and corn meal. The soybeans are mostly processed into livestock feed with the oil used in diesel fuel.

Steve’s research led to his adding solar panels for his dryers. Norma said it’s cut the cost of drying almost in half.

The Kortes do other things to help conserve resources.

“All the ground now is no-till, so we don’t disk any of it. We also use tracks on the auger because it’s less compression on the soil. We irrigate as much as we can,” Norma said. “We try to care for the land and the things God gave us as much as we can.

“Each farmer has their own way of working. What works for one may not for the next. Go with what works for you.”