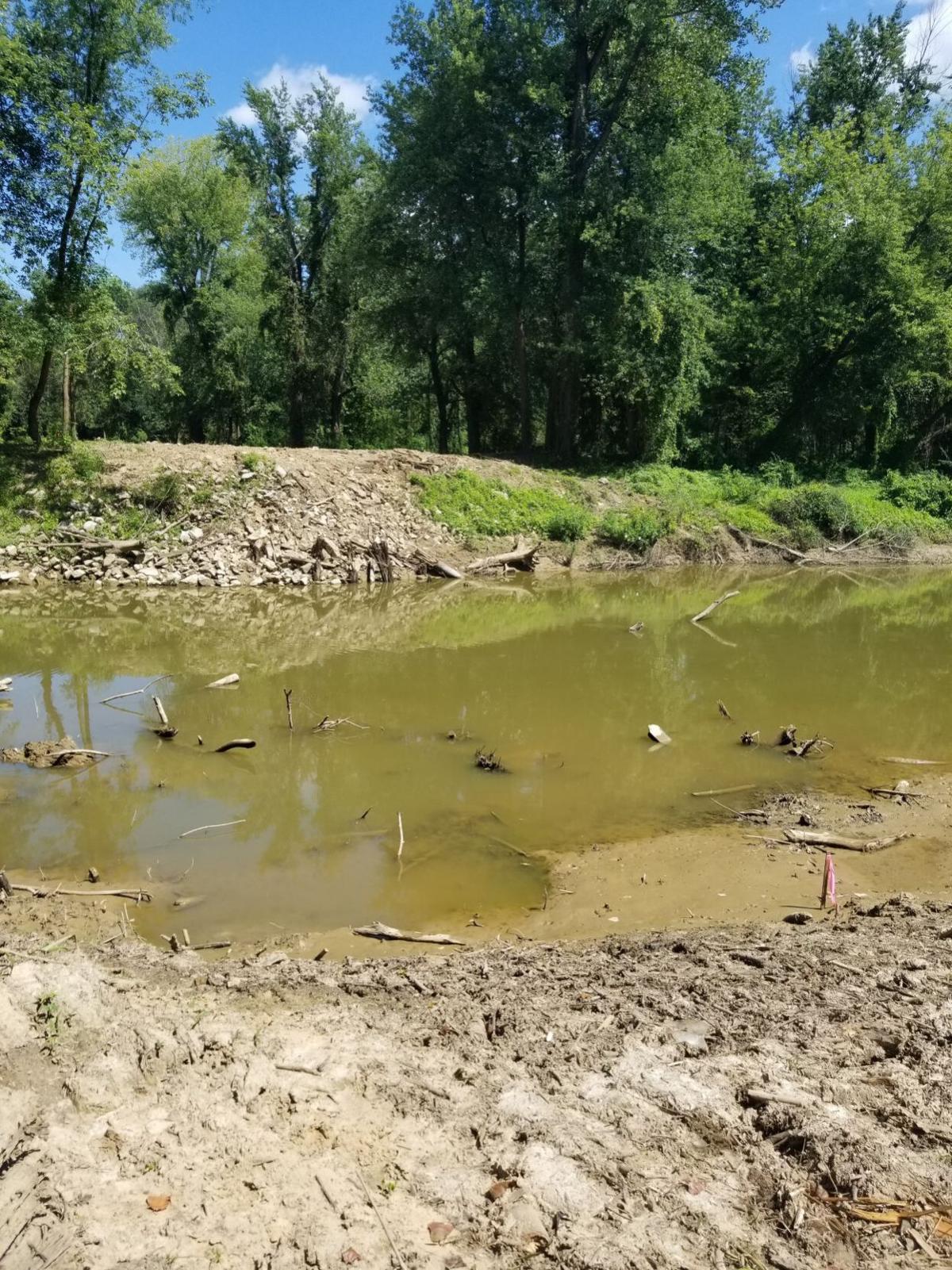 The single-lane wooden bridge over Massac Creek providing passage through Fort Massac State Park is no more. Work is underway for a new two-lane, 28-foot wide bridge that will feature a bike/pedestrian lane on both sides. 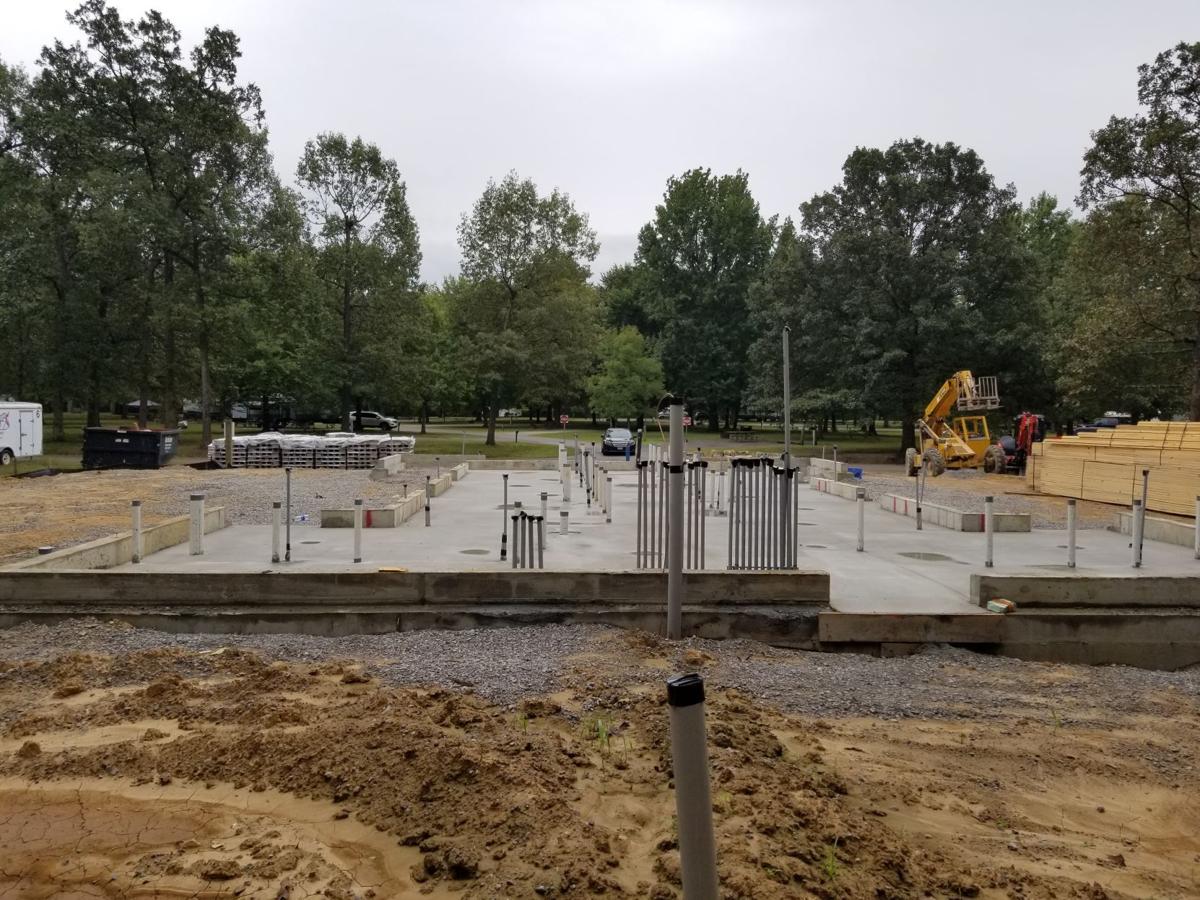 A new shower house for the camping area of Fort Massac State Park is under construction.

The single-lane wooden bridge over Massac Creek providing passage through Fort Massac State Park is no more. Work is underway for a new two-lane, 28-foot wide bridge that will feature a bike/pedestrian lane on both sides.

A new shower house for the camping area of Fort Massac State Park is under construction.

It’s the third weekend of October. And that normally means preparations are underway for the thousands of visitors who about to descend onto Fort Massac State Park.

This week, under normal circumstances, staff would be busy installing A frames; moving large amounts of firewood, hundreds of picnic tables, tents and signage; installing traffic control measures; and dealing with debris from the river in areas where military and scout troops camp and park.

Instead, things at the park are going to be a little different this weekend.

“This would have been the 47th annual Encampment. As far as I know, this is the first time it’s ever had to be cancelled,” said Chris McGinness, Site Superintendent III of Fort Massac. “The first Encampments had very few people; we’ve been estimating an average 200,000 for the last several years. What I hated about the Encampment being cancelled is most of our food vendors use it as a fundraiser for their charities”

COVID may have stopped the annual Encampment for 2020, but that doesn’t mean park staff have slowed down in taking care of the 1300-acre site.

“Although we are not having the event this year, we are still very busy with our day-to-day operations,” McGinness said. “We are currently down to one full-time field staff member and one conservation worker to maintain the entire site. We normally have at least two full prison work release crews from Dixon Springs IIP (Impact Incarceration Program) helping us to accomplish all the prep work, and unfortunately, we have not had a prison work crew all year at the site.”

While COVID, which closed the park from March 15 to May 1, has impacted park events, including the cancelling of Olde Tyme Christmas, “we still have several people using the area,” McGinness said. “We’ve spaced out picnic tables. We try to keep in contact with people so they understand there is a rule in place, and we’re trying to adhere to the 50-person limit under the governor’s Phase 4 order. We’re asking people to RSVP to events (by calling 524-9321). We ask visitors wear face mask in our buildings, as well as social distancing. Everybody is really good about adhering to the rules.”

Those visiting the park can see several projects are in the works:

• A new shower house for the camping area is under construction. “It’s progressing. There’s a period where we’re in a lull to let the concrete cure and getting the laborers in here to lay the block,” McGinness said.

• The wooden bridge over Massac Creek has been taken out with embankment work ready to begin for the replacement. The timeline is unknown but work is progressing on the new two-lane bridge that will feature a bike/pedestrian lane on both sides. “This will be 28-feet wide where the old one was a single-lane bridge. It’s going to be a very nice bridge,” McGinness said. The Department of Transpiration is overseeing the project.

• New bathrooms for the park are currently out for bid. They will be located across the road from the park’s visitors center, one between the Hilltop and Riverview shelters and one at the fairgrounds. McGinness said these will be the same design as on the Belgrade Road facility near the George Rogers Clark Bike Trail.

As many projects are in the works at Fort Massac, others are still to come.

Plans are still under discussion of how to rebuild the 1803-era fort, which has been closed since 2010 due to structural issues. It was built in 2004 to replace a previous structure.

“The fort is still in the planning stages until the architect/engineer gets back with us on finishing the design and the cost. We’re waiting on that to decide if it can be put out for bids or not,” McGinness said. “The east and west barracks and the officers’ quarters will have to be rebuilt. The block houses will need new roofs. Both bridges will have to be redone. The stockade wall will be put back up. We doubt the frazing fence, the little fence in the moat that was the first line of defense for the fort, will be put back up. It’s all still in the design phase.”

After the cost and design are approved, then the project can go out for bid. “There’s a lot of different avenues and costs to adhere to. That’s what we’re looking at right now,” McGinness said. “We had put it out for bids, but it was too high so they had to redesign. Once it comes back, we’ll have a capital projects meeting again. We’re in-between having the full design and putting it out for bid.”

Roads the park’s campground area may soon be undergoing a makeover. A capital projects meeting is scheduled for this month to discuss blacktopping all the roads and improving the drainage in the campground. In addition, half of the camp pads will be asphalted with half of those featuring an extra parking space allowing room for a camper and two vehicles. The Illinois Department of Transpiration will oversee the project for the Illinois Department of Natural Resources, which operates the state parks and state recreation areas.

“By next spring, things will really look different out there,” McGinness said. “A lot of projects going on right now.”

McGinness noted that while the park was shut down to the public during the initial days of COVID, “we have so many projects going that after our staff was called back, we worked on repairs and cleaning the park to get it ready for the reopening.”

At Mermet, a new bathroom. like those for the Fort, will be built for the hunter check station. A new 8-ace shallow wetland was completed at the lake on Sept. 21. “We will probably leave it idle for about two years and let the birds imprint on that area. Eventually, it will be open for hunting,” said McGinness, noting the wetland was built with Duck Stamp funds.

At Dixon Springs, interior work on the cabins and barracks, which were completely gutted and structurally redone in 2019, is paying off.

“It made them really nice. Cabin 7 was hardly ever rented and now we can’t keep it open — it’s scheduled for almost every day from mid-October til the end of the year.”

Cabin 7 features are like a hotel room. “We tried to get it comfortable where a family would go up and stay. We completely redid the kitchen and dining room — new refrigerators, stove, freezers, stainless steel tables, tables and chairs for seating,” McGinness said. “The barracks is more of what you’d expect camping out — it has a communal shower; there are heaters but no air conditioning, there.”

The barracks were entirely redone on the inside and now also have microwaves and mini-fridges. The outlets have are USB compatible. They also have “new” beds — the frames were shipped to the prison where they were sandblasted and powder coated; new mattresses were also built.

The cabin and barracks are available to rent on a daily or weekly basis by calling 618-524-4712. McGinness noted that all bookings for the sites he oversees are done by calling the Fort Massac number.

Parks in the IDNR system are still available to the public with several COVID guidelines put in place. Groups of 25 or more are required to register in advance with the site office to avoid overcrowding or scheduling conflicts.