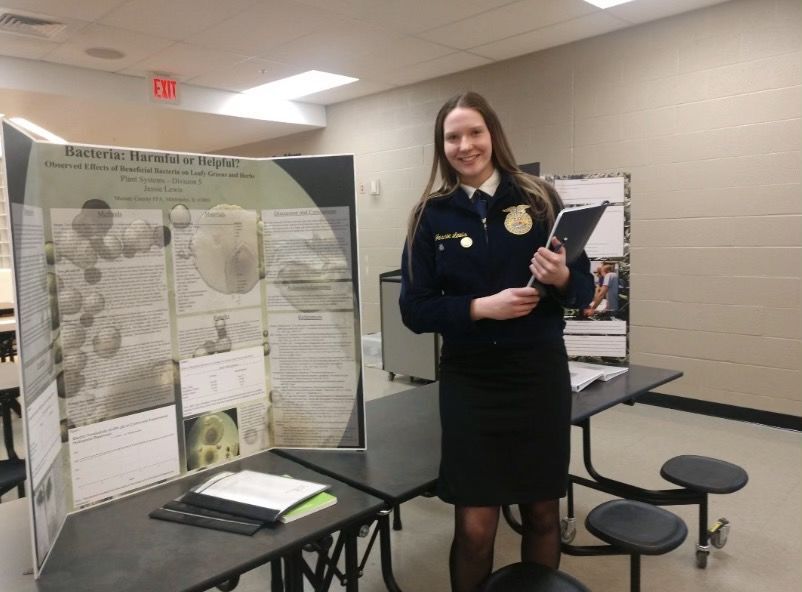 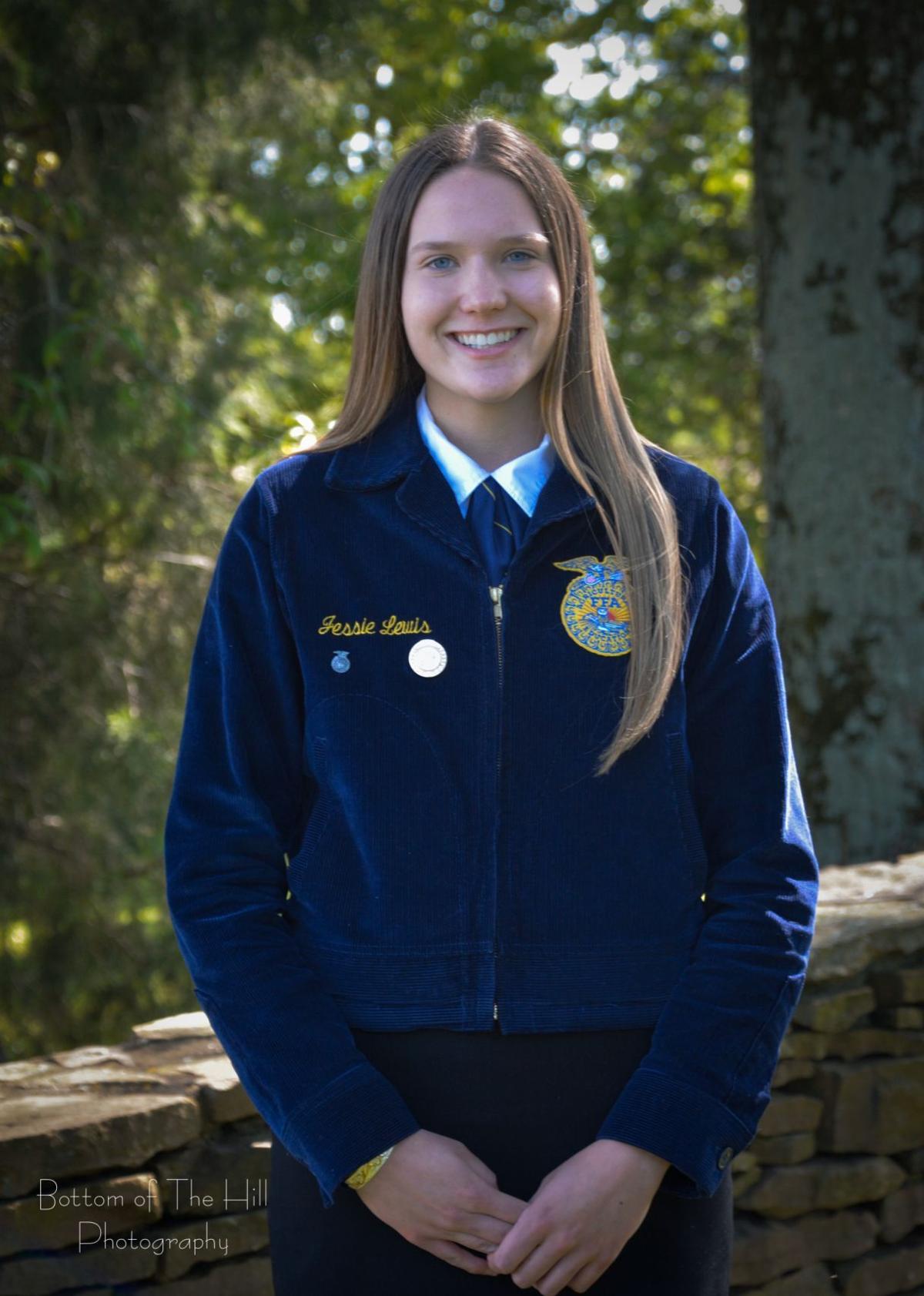 What happens when you experiment hydroponics?

Jessie Lewis, a 2020 Massac County High School graduate, learned of her award in October. Lewis, the daughter of Kathleen Foss and David Lewis, both of Metropolis, is now a freshman at John A. Logan College in Carterville, where she is obtaining an associate’s degree before transferring to a four-year college to major in agronomy.

So what are hydroponics and agronomy? Agronomy is the science of studying plant and soil systems. Hydroponics is the process of growing plants in sand, gravel or liquid with added nutrients but without soil.

It’s a field Lewis has become interested in during her time with the Future Farmers of America program. While her mom grew up farming and they moved to a farm when Lewis was 8, she didn’t really get into agriculture until high school.

“I got into ag classes and ended up joining FFA, not really knowing what I was wanting to do with it or where it was going to take me,” Lewis said. “I started getting into different competitions and started drawing toward plants and how the systems work. I really like the plant systems part and hope to go into a seed sales company to do sales or research.”

Lewis began working on her hydroponics project as her Supervised Agricultural Experience (SAE) at the beginning of her junior year at MCHS.

“I thought it (the project) was a good idea,” said MCHS FFA adviser Jenny Bergmann. “We (she and fellow FFA advisor Cody Smith) both encouraged her to find something she’d be passionate about, something that would help her in the future or open doors for her.”

The advisors only assisted Lewis in reaching out to product suppliers and research support. “Other than that, we let her do her own ideas,” Bergmann said.

Using two plant towers in Bergmann’s classroom, Lewis started by experimenting with nutrient and PH balances to see which would be the best for plant growth. That lead to looking for experiments for Lewis to do.

They reached out to the University of Illinois Extension Office and Dixon Springs where she got beneficial bacteria which was used in an experimental tower while the other was a control tower. The idea, Lewis said, was to see if the beneficial bacteria would help the plants grow stronger and healthier in the foliage and the roots.

The experiment taught her more than what she was researching.

“I ended up finding out the beneficial bacteria was two times less effective in foliage and root growth than the one that was left with just nutrients,” Lewis said. “There’s a few things I would like to fix if I went back to do that project — I’d make sure to focus on one strain of bacteria instead of the 15 I was able to get. Around here, it’s difficult to get my hands on that because of the smaller community. Being connected through 4-H leadership in Illinois now and being in college, I think it’d be easier to get my hands on specific strains.

Lewis also “gained experience in plant system knowledge on how the systems work in general, how much PH effects the plant’s growth and taste, the effect of the main nutrients on the plant growth, and I’ve learned a little bit more about beneficial bacteria and the strains that can be helpful or harmful for the plant,” she continued. “A few things (I’ve learned) on the side would be time management, making sure I get my applications in on time and giving myself enough time not to be stressed out; and leadership, because I’ve had to talk about my project on multiple occasions with FFA, 4-H and different youth events.”

Lewis’ experiment in agriscience won at FFA sectionals during her junior year. It went on to win at districts on her birthday in March. A few weeks later is when COVID-19 hit, delaying the rest of the process. She learned about winning state in May. Online interviews for state came in August.

“I was a little nervous and not too confident about the (online) state interview,” Lewis said. “I thought everybody would have better projects for being up north. When I found out I won, I was ecstatic.”

Materials for nationals had to be submitted on July 15. “We had a long application process to go through that got critiqued really well,” she said.

According to the FFA web page, the National FFA Agriscience Fair recognizes seventh- through 12th-graders who gain real-world, hands-on experiences in agricultural enterprises. Students use scientific principles and emerging technologies to solve complex problems related to agriculture, food and natural resources. All national participants are selected as the state winner at their state agriscience fairs and earn national competition eligibility after being placed in the top 10 within their respective categories.

Lewis placed 12th in Plant Systems Division 5, which had 31 competitors. For both Bergmann, who has been at MCHS since 2012, and Smith, Lewis is their first FFA student to win on the national level in agriscience. They’ve had two past winners in national proficiencies.

Lewis said while she’d like to take a different approach to the project now, “it is difficult to do something on it this year because I can’t keep my towers at college, and I can’t constantly come here and look at them, and I don’t want to put it on Ms. Bergmann to be looking at them that much. It’s difficult to get another project going now with volleyball and school.”

Added to that next semester are internships at Marion FS as agronomy intern and at Grow Mark FS as an exploring agriculture internship. While she’ll be doing both at the same time, “they’re pretty well the same internship, but for Grow Mark, I’ll have to go to conferences, speak to leaders and write up reports after each month and a have a project on the side. I’m really looking forward to that. That will also help toward my American degree in the profit portion and the experience portion.”

Lewis received her state FFA degree this year. She’s currently working to meet the American FFA degree requirements, which includes having received state FFA degree; having at least three years of secondary agriculture; having graduated from high school at least 12 months prior; maintaining records; earning and productively invested $2,000 and worked 2,250 hours in excess of scheduled class time; and participating in at least 50 hours of community service. The American FFA degree, according to the website, demonstrates the effort FFA members apply toward their SAE and the outstanding leadership abilities and community involvement they exhibited through their FFA career.

In the meantime, Lewis has several other things to work on, like where she’ll get her four-year degree.

“It depends on where volleyball takes me,” she said, “But I’m still going to have an eye open for the right program to get into.”