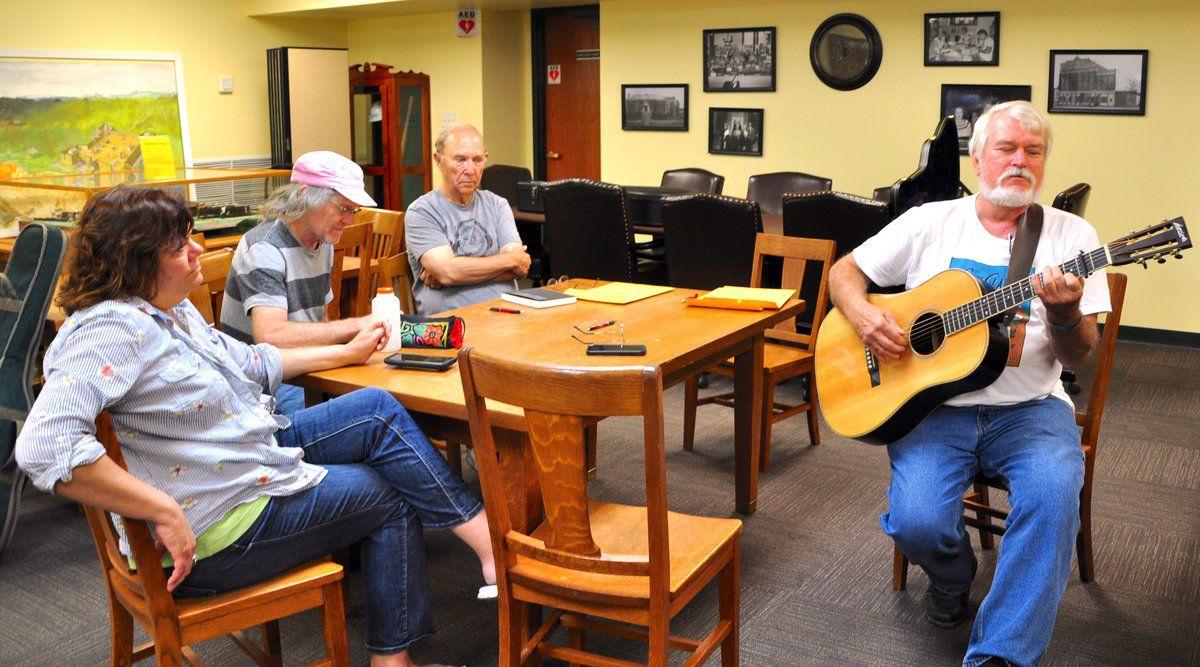 Charles Berryhill, right, plays his song "The Apple Tree" for his fellow Nashville Songwriters Association International (NSAI) group members during a recent meeting. The southern Illinois chapter of NSAI meets on the third Thursday evening of each month at 6 p.m. at Metropolis Public Library. 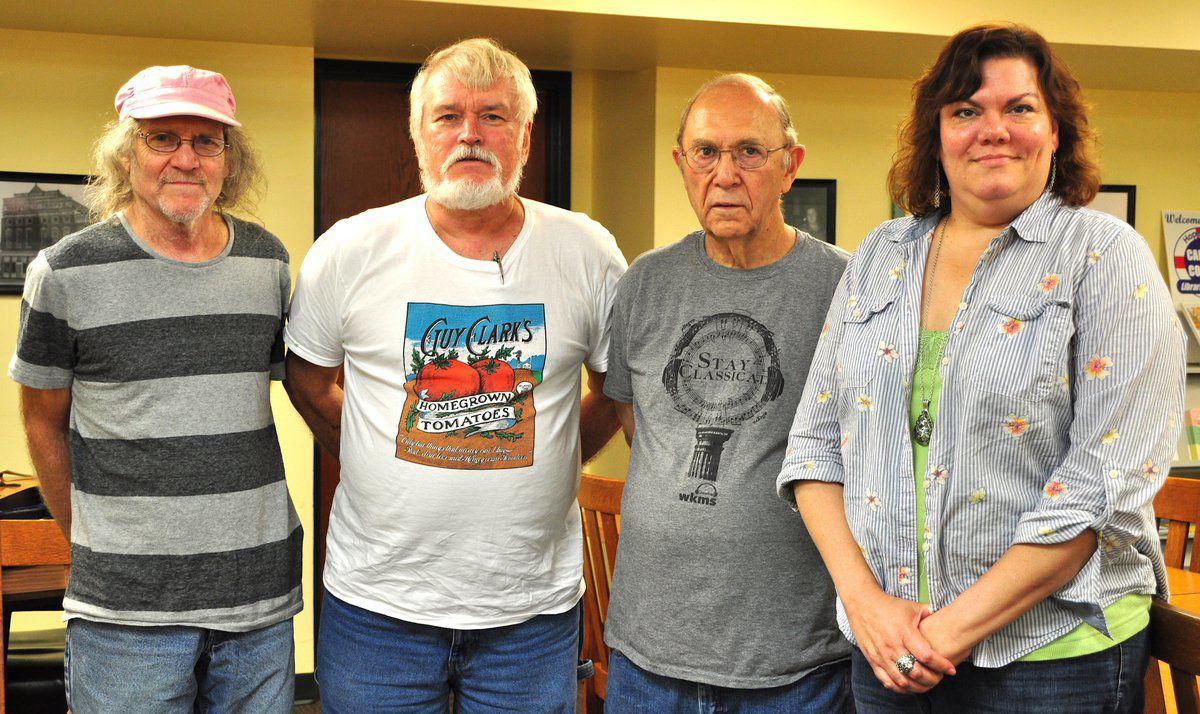 Members of the southern Illinois chapter of Nashville Songwriters Association International are, from left: Mark Donham, of Pope County; Charles Berryhill, of Hickman County, Kentucky; Henry Brazzell, of Paducah; and Laurie Whitnell, of Metropolis. The songwriter group has been meeting at the Metropolis Public Library for six years and during meetings they play songs they have written and receive feedback with the goal of helping members to become better songwriters.

Charles Berryhill, right, plays his song "The Apple Tree" for his fellow Nashville Songwriters Association International (NSAI) group members during a recent meeting. The southern Illinois chapter of NSAI meets on the third Thursday evening of each month at 6 p.m. at Metropolis Public Library.

Members of the southern Illinois chapter of Nashville Songwriters Association International are, from left: Mark Donham, of Pope County; Charles Berryhill, of Hickman County, Kentucky; Henry Brazzell, of Paducah; and Laurie Whitnell, of Metropolis. The songwriter group has been meeting at the Metropolis Public Library for six years and during meetings they play songs they have written and receive feedback with the goal of helping members to become better songwriters.

The Metropolis Public Library has books on the shelves to educate and entertain, and is where children can participate in various activities. It is also the location where a small group converges once a month in the basement to listen, encourage and inspire the craft of songwriting.

The Nashville Songwriter's Association International's (NSAI) motto says: "It all begins with a song."

NSAI is the world's largest not-for-profit songwriters trade association established in 1967 and has a membership of more than 5,000 active and professional members throughout the U.S. and foreign countries.

Laurie Whitnel, of Metropolis, co-coordinator of the local NSAI chapter, has been involved with NSAI for over seven years. She began writing songs when she was 15.

She later picked up songwriting again in her 30s and became an NSAI member when she decided she wanted to audition for the Bluebird Café in Nashville. In order to audition, performers and songwriters must live within a 100-mile radius of the venue or be a member of NSAI.

"It's been a good thing to be involved with," she says, pointing out how members of the organization can go to Nashville on Thursday evenings participate in pitch to a publisher.

"For me, writing is a hobby. It's not a quote, 'music business or a job,' it's just more of a passion," said Whitnel.

At the monthly meetings the group members play one to two songs each, and she critiques them with positive feedback. "We look at song structure, hooks, melody. We discuss past and present hit songs, break them down and talk about what makes them successful," she said.

Henry Brazzell, of Paducah, has been attending the NSAI meetings in Metropolis for about the last three years. He started playing guitar when he was a teenager in the 1960s. He then he got married and had kids, started working and he let his music lapse for about 30 years.

"When I retired, I thought I needed a hobby. I figured it was cheaper than a sports car and safer than an affair, so I started playing guitar," joked Brazzell, who says his wife also played guitar and helped get him started playing again.

Whitnel explained a year ago, Charles Berryhill, from Hickman County, Kentucky, who drives to Metropolis once a month to attend the songwriters group, became co-coordinator.

Berryhill grew up in the early 1960s listening to the Beatles. When he was in school, instead of paying attention, he said he used to sit in class with a compass, drawing out 7-inch 45 records on paper making up song titles with his name underneath. It took him about 20 years in order to write his first song.

According to Berryhill, as he gets older he realizes one day, he will not be around. He has written several songs and says when he is gone those songs would be gone forever too.

"To make my own CDS and to write my own songs, I'm passing on to my grandchildren and great-grandchildren, who have not been born yet, that they can reach back into my generation and "touch me," just like I wish I could reach back and touch my grandfather. That has been the spurring influence," said Berryhill.

He points out the advantages of being an NSAI members. In addition to playing at BlueBird Café, members can submit certain number of songs to NSAI for evaluations each year.

Also, members can go down to Nashville and get certain number of personal evaluations each year with a noted individual in the music industry.

According to Berryhill, he enjoys writing, music and the camaraderie of the monthly songwriters group.

Mark Donham, from Pope County, has been a member of NSAI on and off for awhile and knew the members of the southern Illinois chapter from when he was involved with the western Kentucky Songwriter's Association, which at one time was very active. "You know, it's a small group, but I've gotten to know Charles and Henry and Laurie more," said Donham.

Donham started writing songs when he was 14 and has developed more of an interest in it, especially after his wife passed away three and half years ago. "I work at it really hard. Everyday I write and I practice, and I play in two bands and I do some solo shows around and I'm trying to do regular recordings," said Donham.

It got to the point where the southern Illinois chapter was in danger of closing if no one joined NSAI. The group had to have at least two members besides the coordinators. Donham decided to join NSAI, and he has been a member ever since. In addition to Donham, another group member, Justin Guess, also joined.

A one-year membership to NSAI is $200, but includes various benefits such as participating in pitch to a publisher and being able to perform at the BlueBird Café, which is operated by NSAI.

According to Donham, the best function of NSAI is the lobbying the organization does on behalf of songwriters. He explained how there was recent legislation passed concerning the electronic distribution of songs that helped songwriters and artists get revenue they had not been getting.

Individuals may visit www.nashvillesongwriters.com and search for regional chapters and click on NSAI Southern IL Chapter, to find out more information. From that website, individuals may send an email or call Whitnell.

The group meets in teh basement at the Metropolis Public Library, 317 Metropolis Street, on the third Thursday of the month at 6 p.m.

Whitnell says the group members hope to accomplish is for everyone to become better, stronger songwriters.