Massac County High School classmates, faculty, staff and seniors’ parents came together on April 29, for the first College & Career Signing Day since 2019. Ninety seniors signed to go to 22 colleges, while five will be joining the armed services and seven are going straight into the workforce. 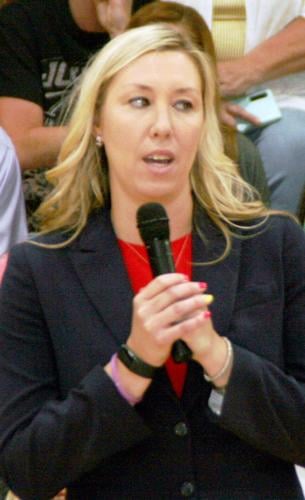 Emily Farmer Loftus, a 2005 honors graduate of Massac County High School, was the keynote speaker at the school’s Class of 2022 College & Career Signing Day on April 29.

Massac County High School classmates, faculty, staff and seniors’ parents came together on April 29, for the first College & Career Signing Day since 2019. Ninety seniors signed to go to 22 colleges, while five will be joining the armed services and seven are going straight into the workforce.

Emily Farmer Loftus, a 2005 honors graduate of Massac County High School, was the keynote speaker at the school’s Class of 2022 College & Career Signing Day on April 29.

Everyone gets to where they’re going in life in a different way — a few take the quick, easy way that doesn’t require much effort; others don’t know how they’re going to get there, but they know there’s help along the way; for some, it takes a little work; and then there are those who have to take a few twists and turns around the obstacles that may be in the way of their goal.

Emily Farmer Loftus shared that the path to her career took her around several twists and turns, but it was passion that drove her.

Loftus was the keynote speaker at Massac County High School’s Class of 2022 College & Career Signing Day on Friday, April 29. (For more on the day, see page B8.)

A 2005 honors graduate of MCHS and native of Metropolis, Loftus graduated in 2008 from Shawnee Community College with an associate’s degree in science, in 2012 from Murray State University with a bachelor of business in business administration and in 2018 from Des Moines Area Community College in Des Moines, Iowa, with an advanced standing diploma in mortuary science. A licensed funeral director and embalmer, she is a co-owner of Loftus-McManus Funeral Homes, Inc., in Metropolis.

Growing up, not only in the funeral industry, but in the second story of a funeral home, “I had never really envisioned doing anything else,” Loftus said. But during her junior year of high school, her parents, Sandy and the late Steven Farmer, “sat me down and basically told me this was not the life I wanted to end up in. They knew this was a difficult schedule, especially if you were a woman and also wanted to become a mother.”

So, her path for the next few years led her to studying massage therapy, licensed practical nursing and business while waitressing during those college years, which led to the opportunity to purchase said restaurant. Those shifts in majors and life choices, she said, taught her “concepts that, I didn’t realize at the time, would help me in the long run.”

Just before her MSU graduation, her parents asked if she’d like to be the funeral home’s secretary. “I immediately jumped at the offer,” she said.

In May 2012, she graduated, moved home, was engaged and was getting involved in her community while finally getting to work in the funeral home. “Everything was great,” she said.

“I had it in my mind he would probably just own the funeral home until he was old and grey, so I was content in my role as secretary,” she said. “With him gone, the funeral home went to my mom, who didn’t have the day-to-day industry experience, so after a few years, she was ready to pass it on. With talks of this, it made me consider that if I was going to own this business, I should probably be fully involved in it.”

But as a wife with an 18-month-old son and a full-time job, going to mortuary school at Southern Illinois University or in Chicago wasn’t feasible. With some research, she found the Des Moines program. In December 2017, she and business partner Jason McManus became the owners of Miller, Aikins-Farmer and Brookport Funeral Homes. In May 2018, she graduated with her advanced standing diploma in mortuary science, took her national boards in October, started her year internship that December and, in December 2019, received her state licensure of funeral directing and embalming.

“For everyone that is going off to college, my advice to you is never say, ‘I’m never coming back to Metropolis,’ ” she told the MCHS students. “Time and time again, I see people return — it might be right after college, it might be in 10 years or it might be during their retirement — but I hear so many people say, ‘I said I’d never come back here, and look at where I am.’

“As jaded as you might be about Massac County right now, this is an amazing community,” she continued. “What I have seen in this community is compassion. We will rally time and time again with fundraisers, donations or whatever is necessary for a family or individual who is in need. Local businesses that people put their blood, sweat and tears in will continuously give a donation to a local charity or school function because they believe in us as a community and each one of you. There are many activities and organizations that exist because of the donations of time and funding from the citizens of Massac County.

“While we are small, we are strong, but we have to have new minds and new ideas to continue to thrive. We have all the keys to be successful, we just need the people to open the doors. That is where your coming back or staying in this town comes in,” Loftus said. “If you see a problem — and this is anywhere you might end up — see if you can make some sort of contribution to make a difference or change. Many of the successful people you see in this town, or even in this room today, sat in those same bleachers you are in. If they sat in those seats and could do it, so can you.”

Loftus noted that while there were many twists and turns in her path, “I never really gave up that desire to do what I have always wanted to do in the first place. Do I regret taking a path less traveled? Absolutely not. Don’t give up on your dream, don’t let anyone tell you that you can’t, and don’t let anything be an excuse as to why you ‘can’t.’ You can if you want it, and you will find a way. Whatever it is that you set out to do, make sure to finish it. Employers want to see that you have enough dedication to something and to yourself that you are able to complete a task. If you want it, find a way to cross that baseline. Passion is an emotion; it does not know time. The world wants to see your passion.”