Audience members listen as moderator Michael Stanley (seated center at the table) discusses the rules for Monday’s mayoral candidate roundtable hosted by the Metropolis Chamber of Commerce. Approximately 18 people attended the event in person. It was also streamed live on the chamber’s Facebook page. 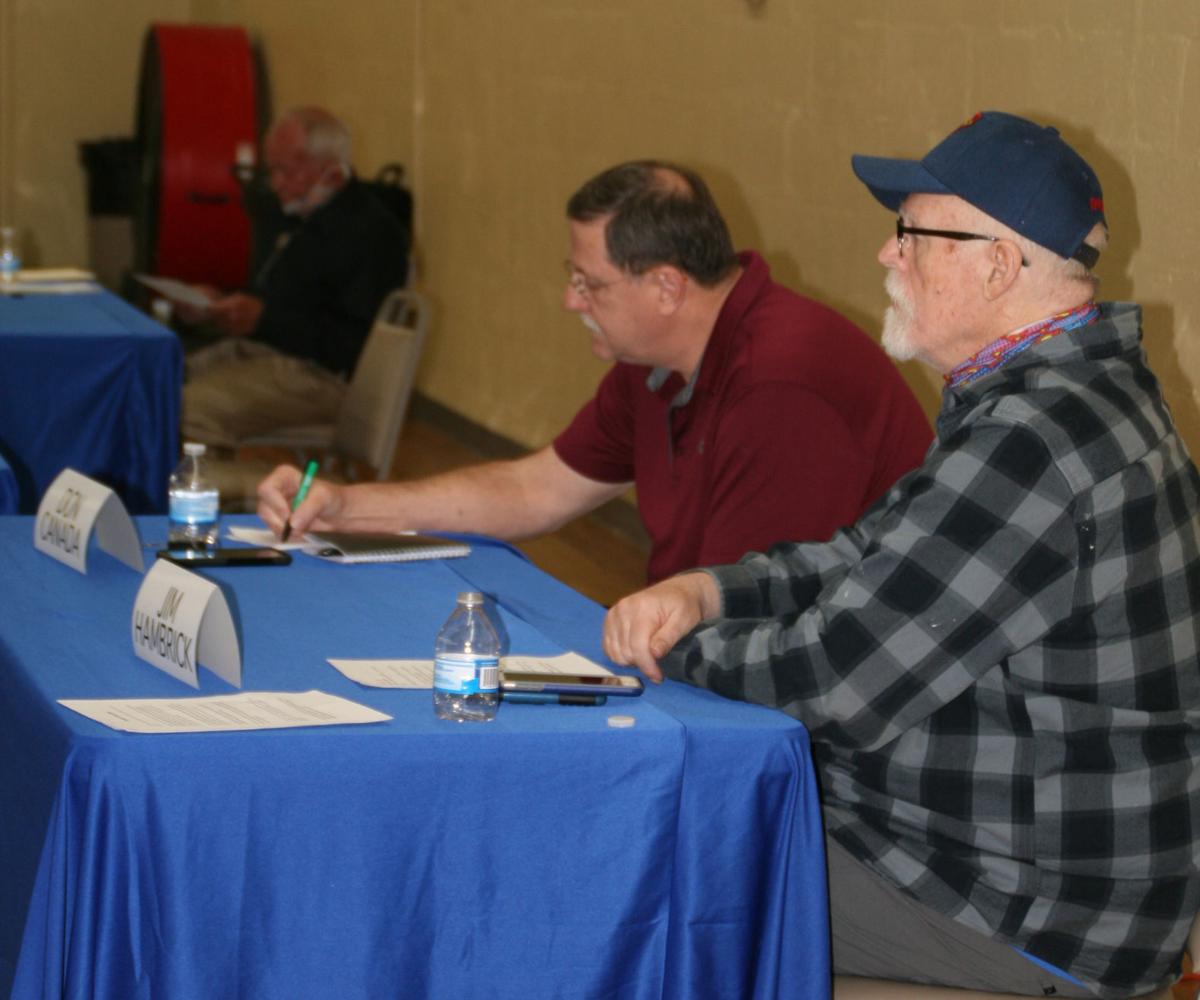 Metropolis mayoral candidates (from left) Robert McDonald, Don Canada and Jim Hambrick listen to a question during Monday’s roundtable hosted by the Metropolis Chamber of Commerce.

Audience members listen as moderator Michael Stanley (seated center at the table) discusses the rules for Monday’s mayoral candidate roundtable hosted by the Metropolis Chamber of Commerce. Approximately 18 people attended the event in person. It was also streamed live on the chamber’s Facebook page.

Metropolis mayoral candidates (from left) Robert McDonald, Don Canada and Jim Hambrick listen to a question during Monday’s roundtable hosted by the Metropolis Chamber of Commerce.

Three of Metropolis’s four mayoral candidates — Jim Hambrick, Robert McDonald and Don Canada — came together Monday to answer questions during a live roundtable hosted by the Metropolis Chamber of Commerce.

The fourth candidate, Chuck Short, was invited to the event, but notified the chamber over the weekend that he would not be able to attend.

Due to COVID-19 capacity restrictions, the event held at the Metropolis Community Center was streamed live on the chamber’s Facebook page to provide the community an opportunity to view it. The 90-minute event is available on the page, www.facebook.com/metrochamber/.

The roundtable featured 10 questions — five given to the candidates ahead of time and five asked at the event. The questions were based on concerns of the local business community submitted by chamber members.

Michael Stanley, sales manager with Bristol Broadcasting Corporation, was the event’s moderator and explained the evening’s rules. Candidates were given 90 seconds to introduce themselves to begin the event and two minutes for closing remarks at its end. Each had two minutes to answer the question posed and had the opportunity to give a 60-second rebuttal.

“This is not a debate,” Stanley emphasized. “We ask you stay on topic of the question being asked, not interrupt the other speakers, hold any comment for your turn at the podium and not address one another in their answers. The audience is asked to not disrupt during the event.”

All in attendance were asked to silence their phones and devices. Candidates and the audience were informed of a three-strike rule — a verbal warning; a verbal warning and notification of the second strike; and being asked to leave. Stanley gave a warning to McDonald, who was talking on his cell phone while Canada was answering the event’s second question.

For the order answering questions, candidates were asked to pick a number between 1 and 1,859, as it was the year Metropolis was founded; event officials chose 1,794, as it was the year President George Washington ordered the reconstructing of Fort Massac. McDonald was the closest without going over to the chosen official number with 1,520; he was the first to introduce himself and answer the first question of the night.

Over the course of the evening, the candidates made the following statements:

• McDonald: “We need more police officers in our town to help slow down crime. Crime has gone too far in the city, and it needs to stop. … I think we need a refreshment stand downtown. I think it’d bring a whole lot more people to Metropolis. We need more people in here. We need to get our people back. We’ve lost a lot of people in this town. We need to built it back up and build our economy back up. We could build this town and make it better. … I know our roads are real bad. I’ve never understood why the county and the city don’t work together. We’ve got street signs all tore down in Metropolis. It’s got paper all of it. The city don’t have enough workers. I wanted to get people from the state to come in let them pay off their fines and work with the city. This town has gone down. It’s in bad shape. We need to clean it up and make it better.”

• Canada: “I’m not an office sitter — you won’t see me sitting up there behind a desk all day long. I’ll be out 30 or 40% of the day. You might catch me out in public — down Market Street, down to another business in town. I believe in getting out and talking to the businesses in town. Unless you’re out every day talking to people, you don’t know what the problems are. You should be out in the public, making sure everything is what it’s supposed to be and what you were elected for.”

• Hambrick: “To be mayor of Metropolis is something that needs a conductor. It needs someone who’s willing to go out there every day and fight for the people. … Pay attention to those businesses that are wanting to start something out with 15 or 20 employees — they chase them away because ‘we’re already too big for who we are.’ If they didn’t want it big, they never should have named it Metropolis, that’s a Greek word that means ‘big city.’ If that’s what we’re destined to be, let’s make up our minds based on which direction we want to go based on how we want it to turn out. Our kids are leaving because there’s no work here. Where do you want them to go? Pay attention to the franchises.”

One of the 10 questions asked the candidates was: “If elected, what would you do as the new mayor to combat the crime we have in our city?” Their direct answers were:

• Canada: “Day 1, I would go to the council and ask for permission to hire two more officers right off the bat. We would take those two officers and sit down with Mr. (Harry) Masse, our chief of police, and prioritize what a list of what we think the most important things are we need to reduce in the crime level and develop a plan to do it. And give him permission to take his police department and attack the problem. We need to be supportive with whatever they need to correct the situation.”

• Hambrick: “Why are we doing the same thing we were doing when the aldermen were elected? Why are we looking at it again and seeing the same thing? … We need to get out there and really understand what the issues are and actually do something about it, rather than just talk. … We’ve got to be action oriented. …”

The chamber hosted a similar event during the 2017 mayoral election.

“We thank everyone for tuning in and coming out in person,” chamber president Kelly Lunsford said after Monday’s event. “We know there were some technical difficulties during the livestreaming due to the Wifi connection; we apologize for that. But I think we had a good turnout, and I hope everybody in the community was satisfied with what we did for them and hope they enjoyed it as much as we did. I thank the candidates for taking the time to come out and do this for us. I thank Michael Stanley for being our moderator; I think he did an excellent job. I thank the chamber crew for helping out and being a part of this.”

Sorry, there are no recent results for popular articles.

Sorry, there are no recent results for popular images.