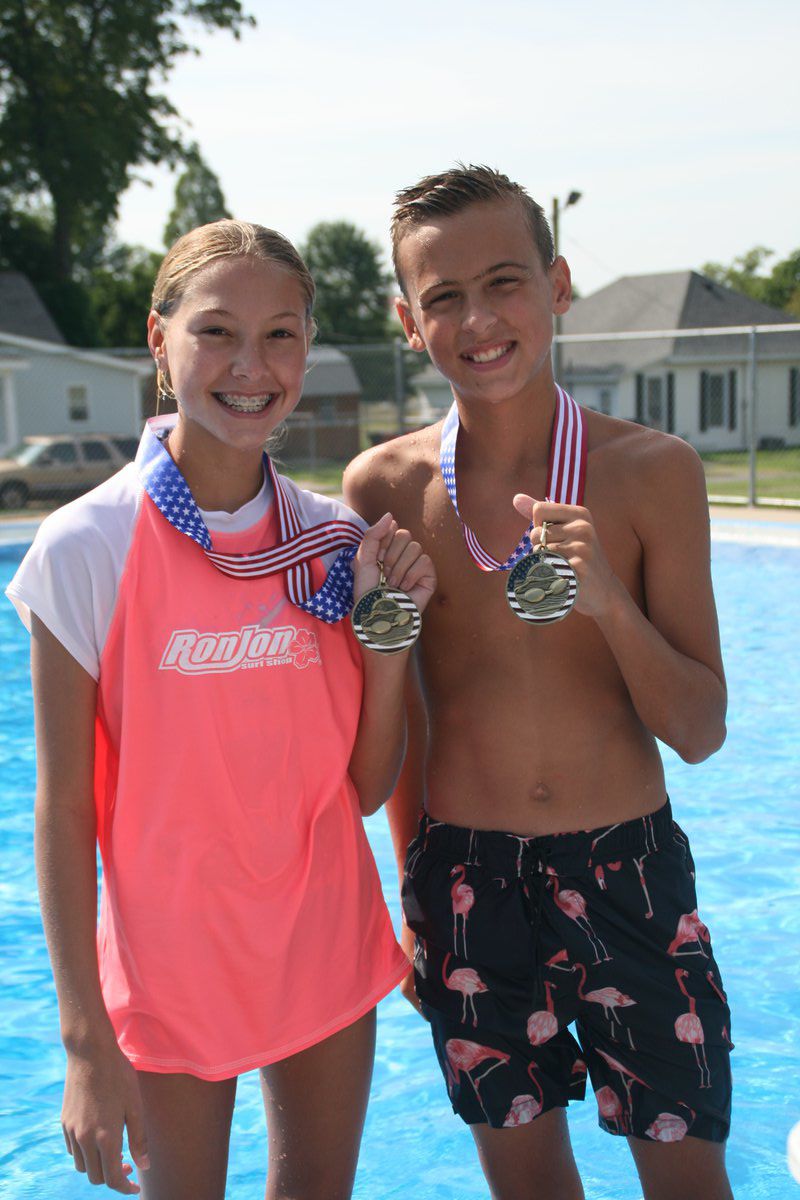 The winners from the Aug. 7 training at Metropolis City Pool are Ahryauna Comer, left, distance winner for swimming 50 laps and her twin brother, Eason Comer, right, the winner of the sprint competition. They are from Pope County. 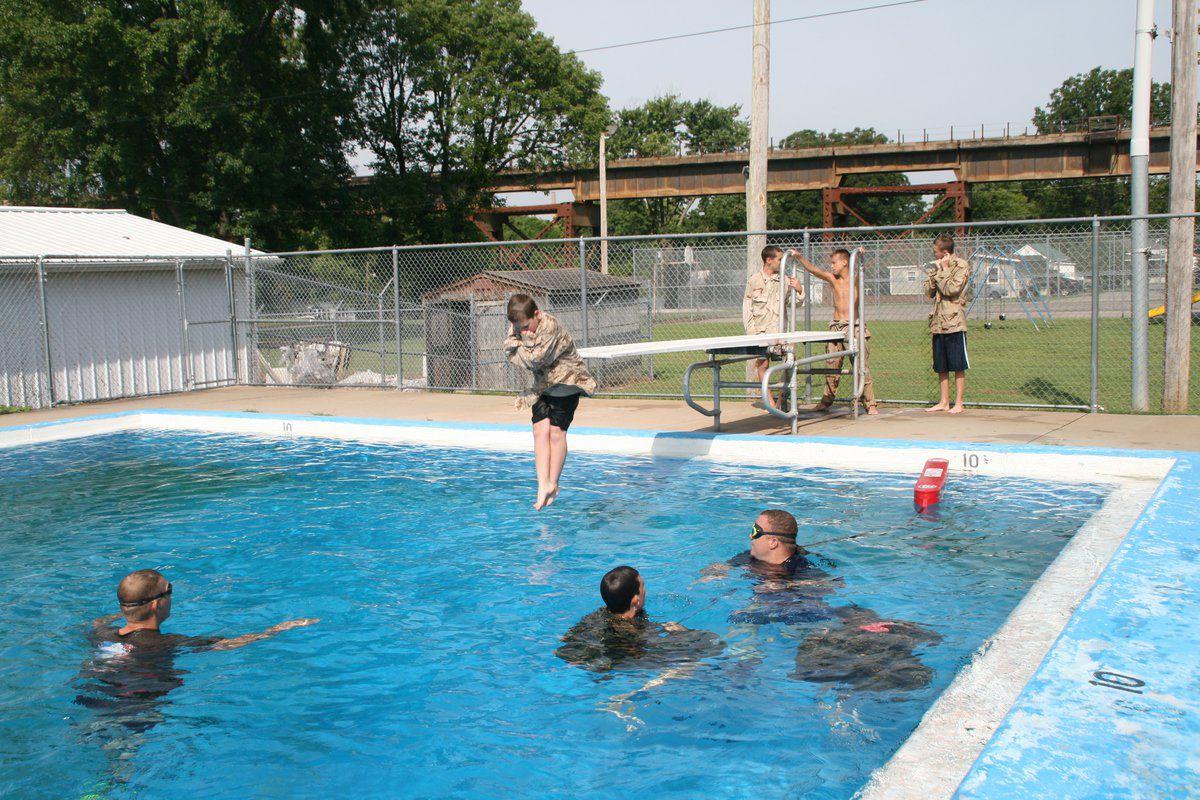 Master Sergeant Justin Robertson (left) and Sergeant Dartanyen Crim (right) instruct cadets on the proper form as they jump into the pool and as they make flotation devices from their pants and jackets.

The winners from the Aug. 7 training at Metropolis City Pool are Ahryauna Comer, left, distance winner for swimming 50 laps and her twin brother, Eason Comer, right, the winner of the sprint competition. They are from Pope County.

Master Sergeant Justin Robertson (left) and Sergeant Dartanyen Crim (right) instruct cadets on the proper form as they jump into the pool and as they make flotation devices from their pants and jackets.

When the United States Naval Sea Cadet Corps - Land Between the Lakes Division began in February, there were only five members, but throughout the year it has grown.

According to administration officer Crystal Crim, of Simpson, currently there are 17 members, and Crim wants to spread the word about this program and what it is about in order to get more area youth to participate.

There are kids involved in the program all the way from Harrisburg to McKenzie, Tennessee and western Kentucky.

According to Seacadets.com, the first unit of sea cadets was formed in 1959 and was comprised of 78 young men from around the country. Today, there are over 380 units and approximately 9000 young men and women, and the program continues to grow.

Crim, who had previously lived in Metropolis for 10 years, contacted Pris Abell, City of Metropolis Parks and Recreation director, about using the city pool for cadet training. The city agreed to the request.

Since June, the cadets trained once a week at the Metropolis City Pool. The summer swim training wrapped up on Aug. 7 with eight youth participating in the training. Students, who were dressed in military gear, practiced jumping off of the diving board in the "Hang 10" position into the deep end of the pool, where then they made a floatation device from their trousers and jackets. Crim explains the exercise simulates jumping off of a ship.

In addition to those training sessions, Crim explains they gather one weekend a month to hold drills. They are held at the Benton, Kentucky National Guard Armory.

Cadets experience also helps individuals become more competitive for commissioning programs. Annual scholarships are awarded to exceptional cadets who wish to pursue a college education. Cadets who go through one to two weeks of boot camp become eligible for college scholarships. If those cadets who have participated in the program actually enlist in the military, when they go through boot camp with their respective branch, they will have the chance to graduate boot camp as an E3, instead of E1.

Prospective cadets who wish to join the program must be drug-, alcohol- and gang-free while attending school full-time with at least a "C" average.

Each individual unit determines the annual enrollment fee. The Land Between the Lakes division fee is $250 for the year. Crim says the cost covers medical insurance through the Navy, administration fees and the military uniforms.

Crim says they are looking for sponsors to help with expenses as well as scholarships for those who may not be able to afford to join.

"If payment is an issue, we can work on a payment plan to help," said Crim.

Throughout the year, cadets regularly meet for activities with a local unit. During school vacations, cadets have the opportunity to participate in training events around the country.

Cadets train aboard U.S. Navy and Coast Guard ships and can meet Sea Cadets from around the world on the International Exchange Program.

Cadets have the privilege of wearing the U.S. Navy uniform with appropriate Sea Cadet insignia. Cadets have absolutely no commitment regarding future military service, but cadets who do decide to enlist may be eligible to enter at an advanced pay grade.

The International Exchange Program (IEP) is also available for sea cadets. The IEP's mission is to provide specialized education, training and the opportunity to travel abroad for qualified sea cadets who have an interest in learning about the cultural differences and nautical traditions that strengthen the global community, according to seacadets.com.

According to Crim, the division is always looking for community service hours for the cadets to participate in. She said they want the cadets to become more active in color guards and local parades.

The next weekend for drills will be Saturday and Sunday, Sept. 14-15, and Crim encourages children to consider joining the cadet program. She says there will also be a paint party fundraiser in Vienna on Friday, Sept. 27 at the Vienna Art Studio from 6-8 p.m. The cost is $25 per person, and individuals may register online at www.viennaartstudio.com. The funds raised from the event will help buy gear to take the cadets camping in October.

Anyone who would like more information about the program may contact Crim at 618-771-2723 or email her at crystal.crim@lbl-division.net.

Individuals may also find out more information and see posts on their Facebook page -- Landbetweenthelakesdivision-USNSCC.

Sorry, there are no recent results for popular articles.