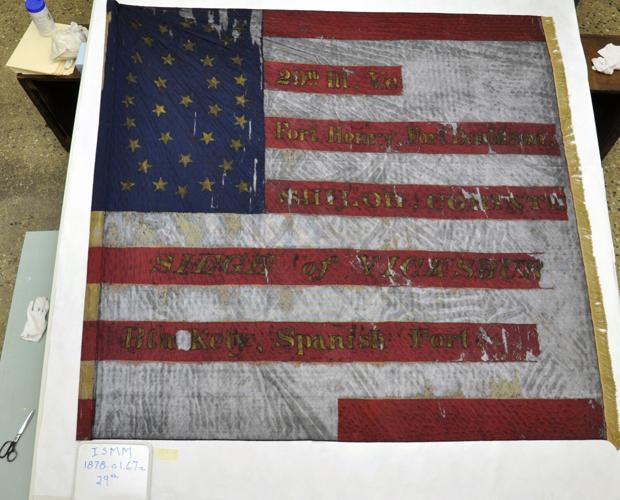 This is one of the United States flags the 29th Illinois regiment served under. It runs down the main battles the 29th engaged in during the Civil War — Fort Henry, Fort Donaldson, Shiloh, Corinth, Siege of Vicksburg, Blakely and Spanish Fort. The flag is part of the collection of the Illinois Military Museum in Springfield and stored at Camp Lincoln, the Illinois National Guard installation in Springfield. 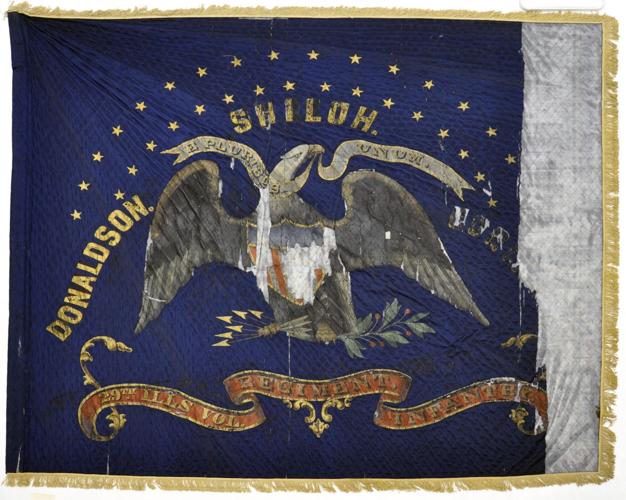 This is one of the Illinois flags the 29th Illinois regiment served under. It runs down the first battles during the Civil War — Donaldson, Shiloh and Corinth. The flag is stored at Camp Lincoln, the Illinois National Guard installation in Springfield.

This is one of the United States flags the 29th Illinois regiment served under. It runs down the main battles the 29th engaged in during the Civil War — Fort Henry, Fort Donaldson, Shiloh, Corinth, Siege of Vicksburg, Blakely and Spanish Fort. The flag is part of the collection of the Illinois Military Museum in Springfield and stored at Camp Lincoln, the Illinois National Guard installation in Springfield.

This is one of the Illinois flags the 29th Illinois regiment served under. It runs down the first battles during the Civil War — Donaldson, Shiloh and Corinth. The flag is stored at Camp Lincoln, the Illinois National Guard installation in Springfield.

With the commencement of 1865, the entire Union army under the command of Ulysses S. Grant was on the move and determined to bring the great War of Rebellion to an end. Their sights were set solely on a country unified under the Stars and Stripes. Such was the feeling of Maj. Gen. Edward Canby, commander of the Military Division of Western Mississippi, who was assigned to conduct a campaign against the southern port city of Mobile, Alabama.

The 29th Illinois departed en route from Memphis, Tennessee, on Jan. 1, quietly cruising past many familiar places such as the Yazoo River, Vicksburg, Mississippi, Natchez, Mississippi, and the Red River. They arrived at Kenner, Louisiana, on Jan. 5 and pitched camp just outside the western city limits of New Orleans.

The regiment was now in the Third Brigade of the First Division with the 30th Missouri, 161st New York and 23rd Wisconsin under the command of Col. Loren Kent. Orders came to move on Feb. 11 by rail to Hocus Landing on Lake Pontchartrain. From there, they embarked on a couple of sea-going vessels and steamed across the large body of water to its inlet at the Gulf of Mexico. From there, they journeyed east along the coast for 100 miles to Dauphin Island, Alabama.

Over the next four weeks, the division’s 12,000 soldiers bivouacked on the beach awaiting orders to move on the rebel defenses in Mobile Bay. Capt. William Tindall, from Brookport, now leading “K” Company, wrote in a 1926 Republican-Herald article detailing the enjoyable time they had swimming in the warm Gulf water. He shared a humorous story of several hundred men wading out about a quarter of a mile in the shallow water when suddenly, out of nowhere, numerous schools of porpoises appeared leaping out of the water. Not knowing what the sea beasts were he said, “The swimmers hiked for shore pawing and splashing the briny water, some yelling that man-eating whales were in pursuit ready to devour!”

Their month of preparation at Dauphin Island came to an end on St. Patrick’s Day 1865 as the First Division was transported 25 miles east across the inlet of Mobile Bay. They landed at Navy Cove and made their way north to Spanish Fort, located on the extreme northwest shore of the Bay. Tindall described the march northward: “During eight successive days we were toiling in travel over roads almost impassable en route to Spanish Fort and arriving there on March 26.”

The following day, skirmishers engaged the rebel defenses. The 29th Illinois’ brigade advanced on the left pouring a concentrated fire into the fort. At dark, they moved in 200 yards and built a line of earthen works, which they held for several days. The regiment was then ordered up to the advance trenches. After heavy shelling by the enemy, they suffered a number of killed and wounded. Overwhelmed and outnumbered, the Confederates abandoned the fort and steeled away to Fort Blakely. The division, as well, left Spanish Fort in pursuit of the enemy on March 30.

An almost identical story could be told about the assault and siege on Fort Blakely a few days later. This time though, there was no escaping for the rebels. After a number of days fighting, at 6 p.m. on April 9, a federal charge was ordered on the fort resulting in a Confederate defeat, bringing the siege to an end. Over 2,800 rebels were captured with a combined loss of 800 to 900 killed and wounded on both sides.

History shows the Battle of Fort Blakely and the subsequent surrender of Mobile as the final major battle of the American Civil War. This victory occurred just hours after Confederate Gen. Robert. E. Lee surrendered to Grant at the Appomattox Court House in Virginia.

Little did the men of the 29th Illinois realize at the time, they had fought in the battle considered to be the beginning of the end to the Civil War. Unfortunately, this was not the end of their federal service, for there was still work to do. In fact, their next assignment took them back into open sea and 500 miles to the west in Galveston, Texas.

Even though there was a general cessation of hostilities throughout the south, there were still a number of enslaved people in Texas unaware of their freedom. In fact, it was common knowledge some slaveholders were shielding their slaves from emancipation until that year’s crops were harvested. Maj. Gen. Gordon Granger, commanding general of the Army of Reserves, landed at Galveston on June 19, 1865, and issued a proclamation declaring all enslaved people free. This particular action, long commemorated as Juneteenth each year on June 19, is now America’s newest national holiday.

Under Granger’s command, the 29th Illinois along with the 30th Missouri and the 4th and 7th Massachusetts Batteries were sent as well to Galveston. Dr. S.J. Bumstead, one of the regiment’s three medical officers, wrote in a 1904 Decatur Herald newspaper of the stormy passage across the Gulf. In fact, it was so bad, many thought they would be lost at sea. With great relief, he said, they landed safely on July 1 and had a grand parade on Galveston beach on the 4th of July.

The 29th Illinois was divided into three detachments with Companies “I” and “K” transported up the Texas Central Railroad to Brenham.

Brenham was a center of commerce, as well as the county seat of Washington County. Many enslaved people there were still unaware of their freedom. Companies “I” and “K” played a tangible role in securing their freedom and restoring federal jurisdiction in that region.

Having served their country with distinction, the 29th Illinois was mustered out of the United States Army at Hempstead, Texas, on Nov. 6, 1865. They left for Illinois a couple of days later arriving at Springfield on Nov. 26 where they received their final pay and were discharged.

Thus ended the illustrious service of these noble men from Egypt who sacrificed so much to help preserve the Union.

NOTE: An epilogue to the series will be published soon.