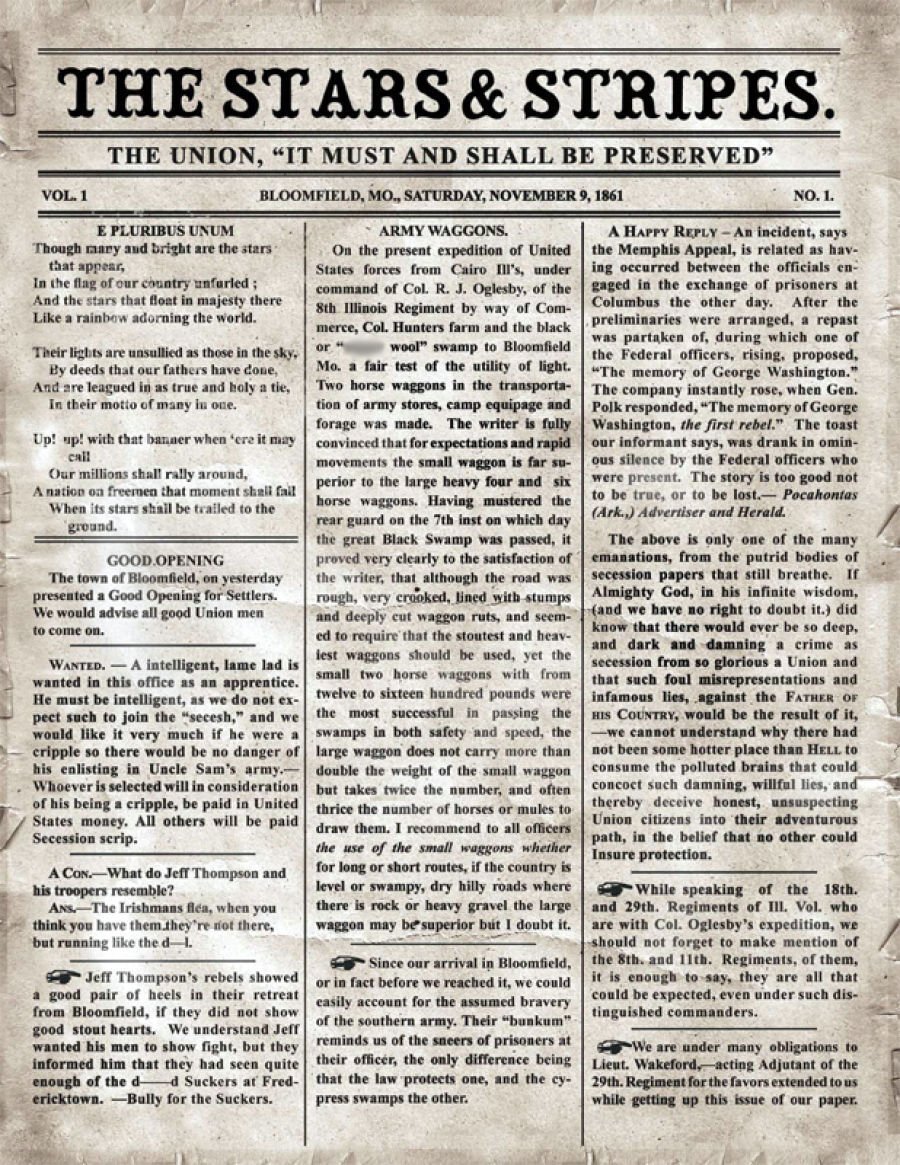 Members of the 29th Illinois Infantry Regiment, which included a company of young men from Metropolis, were among those who broke into the Bloomfield, Missouri, newspaper office to print their own paper, “The Stars and Stripes,” on Nov. 9, 1861. 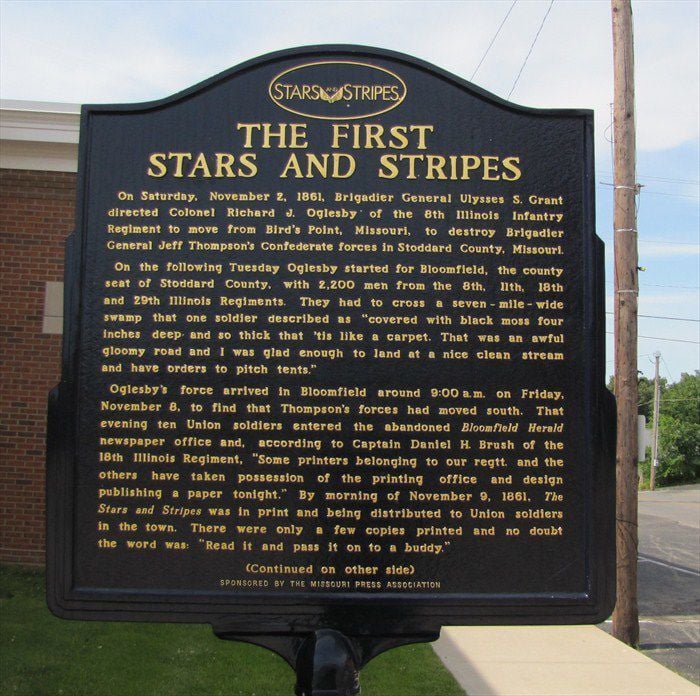 A marker in Bloomfield, Missouri, tells the history and location of the first edition of “The Stars and Stripes” newspaper.

Members of the 29th Illinois Infantry Regiment, which included a company of young men from Metropolis, were among those who broke into the Bloomfield, Missouri, newspaper office to print their own paper, “The Stars and Stripes,” on Nov. 9, 1861.

A marker in Bloomfield, Missouri, tells the history and location of the first edition of “The Stars and Stripes” newspaper.

News of the April 1861 Confederate attack on Fort Sumter traveled quickly to the state which had just given the United States its new president, Abraham Lincoln.

Even though Illinois had been declared a free territory in 1787 by the Northwest Ordinance and declared a free state in 1818, it bordered the slave states of Kentucky and Missouri. Geographically, Illinois had the appearance of a dagger pointing directly into the heart of the Southern states. The point of this imaginary dagger was Cairo.

Naturally located at the convergence of the upper Mississippi and Ohio rivers, Cairo held the key to the free movement of commerce from the Midwest region to the South and then on to world markets. Because of its strategic military importance to the Union, Illinois Gov. Richard Yates decisively ordered Illinois soldiers to occupy this little town that only a year earlier boasted 2000 inhabitants. Over the next six months, Cairo’s population would grow by thousands of men as more regiments arrived, including Col. James Readon’s 29th Illinois Infantry Regiment, members of which included a company of young men from Metropolis.

Initially, the regiment was brigaded together with the 18th, 27th and 31st Illinois regiments and placed under the command of Egyptian lawyer and politician John Alexander McClernand, a personal friend of Lincoln. Unlike military-trained West Point graduates, such as Ulysses Grant and other generals, McClernand’s appointment was considered political and made with the hope that he and others like him would help secure the region for the Union.

Situated on low-lying ground and prone to seasonal flooding, camp conditions in Cairo were less than desirable for the new recruits. In his diary, Sgt. William S. Bolerjack described warm weather and deplorable sanitary conditions that caused many cases of diarrhea, fever and measles. Not only did this leave many unfit for duty, but also caused some early discharges due to disability.

From this base of operations throughout the fall and early winter, the 29th Illinois took part in a number of expeditions into southeast Missouri and western Kentucky for the purpose of foraging, the confiscation of crops and livestock or suppressing rebel bushwhacking in the region.

On the orders of Grant, the 29th Illinois was sent down the Mississippi as a force to reconnoiter the west bank opposite Columbus, Kentucky. This action followed the Confederate occupation of this strategic river town on Sept. 3, 1861.

The Federals departed Cairo on the steamer “General Scott” under gunboat escort, landing just above Belmont, Missouri. They were forced to noiselessly maneuver their way through a cottonwood swamp and under orders to return immediately to the transport should they hear “one long and 15 short whistles from the boat,” Bolerjack said. “At length, the signal was given, and we got back soon.” They spent the night on the “General Scott” and continued their scout the next day without incident.

As November came in, martial life for the 29th Illinois graduated to a new level. Col. Richard J. Oglesby, later elected governor of Illinois, was ordered by Grant to take an expeditionary force of 2200 men comprising the 8th, 11th, 18th and 29th Illinois regiments up the Mississippi to Commerce, Missouri. From this landing point, the soldiers would attempt to neutralize “the Swamp Fox” Gen. Jeff Thompson and his roving bands of guerilla fighters, who were menacing Missouri residents sympathetic to the Union.

Early in the morning on Nov. 4, the 29th Illinois got off the steamboat “Memphis” and, along with their brigade, prepared themselves for the march inland. Leaving the following morning, they made it as far as Benton, Missouri, and bivouacked on the farm of a Confederate colonel by the name of Hunter, who, surprised by their arrival, promptly skedaddled without a saddle on his horse. Like so many rebel soldiers, he left the care of his farm to his wife and children. There was little Mrs. Hunter could do to keep the hungry Union soldiers from absconding her pigs, sheep and poultry. In his diary, Pvt. Henry Shappard, of the 29th Illinois, recounted how displeased Mrs. Hunter was with this turn of events and told them her husband would return with 10,000 Confederates and run them off. The only response to her threat was laughter and the expressed wish that he would indeed return!

After a miserable march through 30 miles of swamps and forests, the 29th and its brigade met up with the 8th and 21st Iowa regiments on the afternoon of Nov. 8 in Bloomfield, the capital of Stoddard County, Missouri. Thompson’s forces had just left and escaped capture.

Even though the Boys in Blue were but a couple of days in Bloomfield, they left their mark in the history books when a few of the soldiers with printing experience, broke into the local newspaper office and printed their own paper. They named it “The Stars and Stripes.” Even though thais was just a one-off edition, it has been recognized as the first “Stars and Stripes” newspaper, which is in distribution yet today to all American service personnel serving throughout the world.