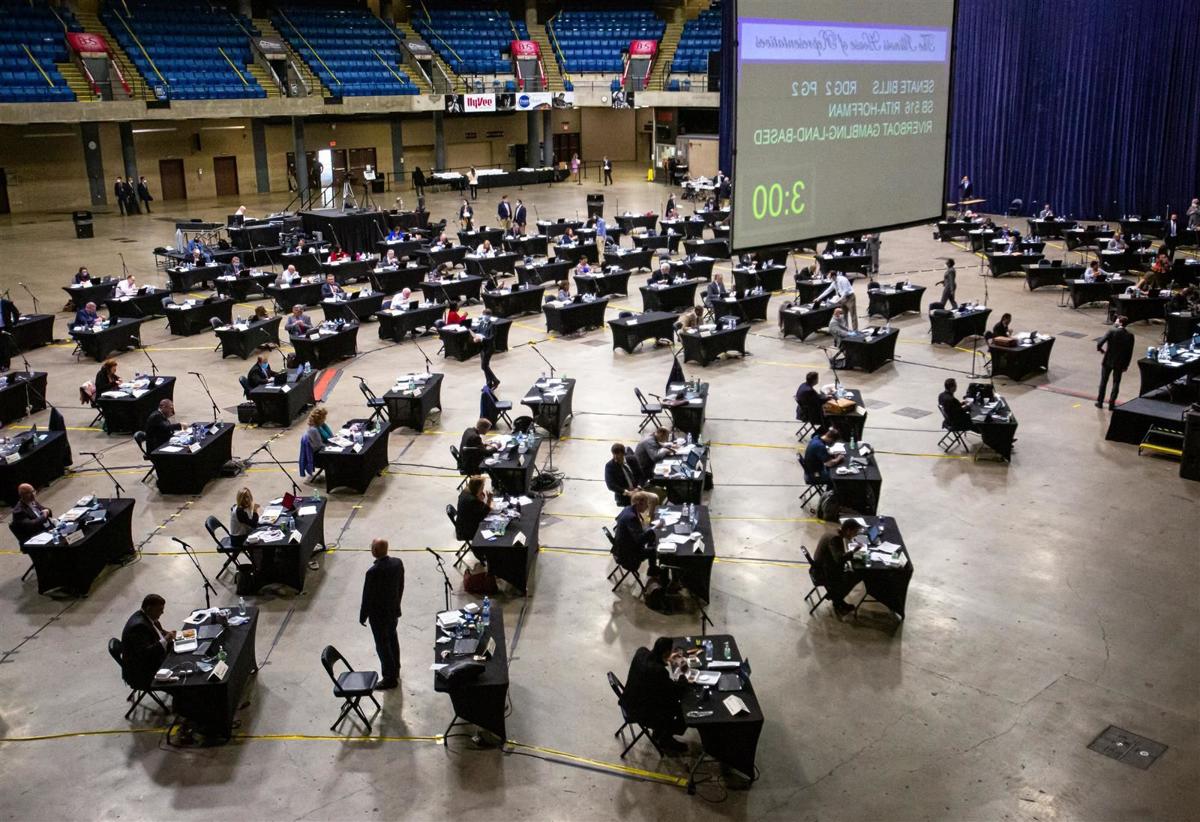 Above: Lawmakers prepare for an extended session of the Illinois House of Representatives on May 23 at the Bank of Springfield Center in Springfield. The House held the last four days of the spring session at the center instead of the Illinois State Capitol because it allowed for safe social distancing amid the COVID-19 pandemic. Below: Protesters outside the Bank of Springfield Center in the capital’s downtown call for Illinois to reopen sooner than the timeline provided in Gov. JB Pritzker’s Restore Illinois plan. Members of the state House met inside the arena for the first of a four-day special session on May 20. 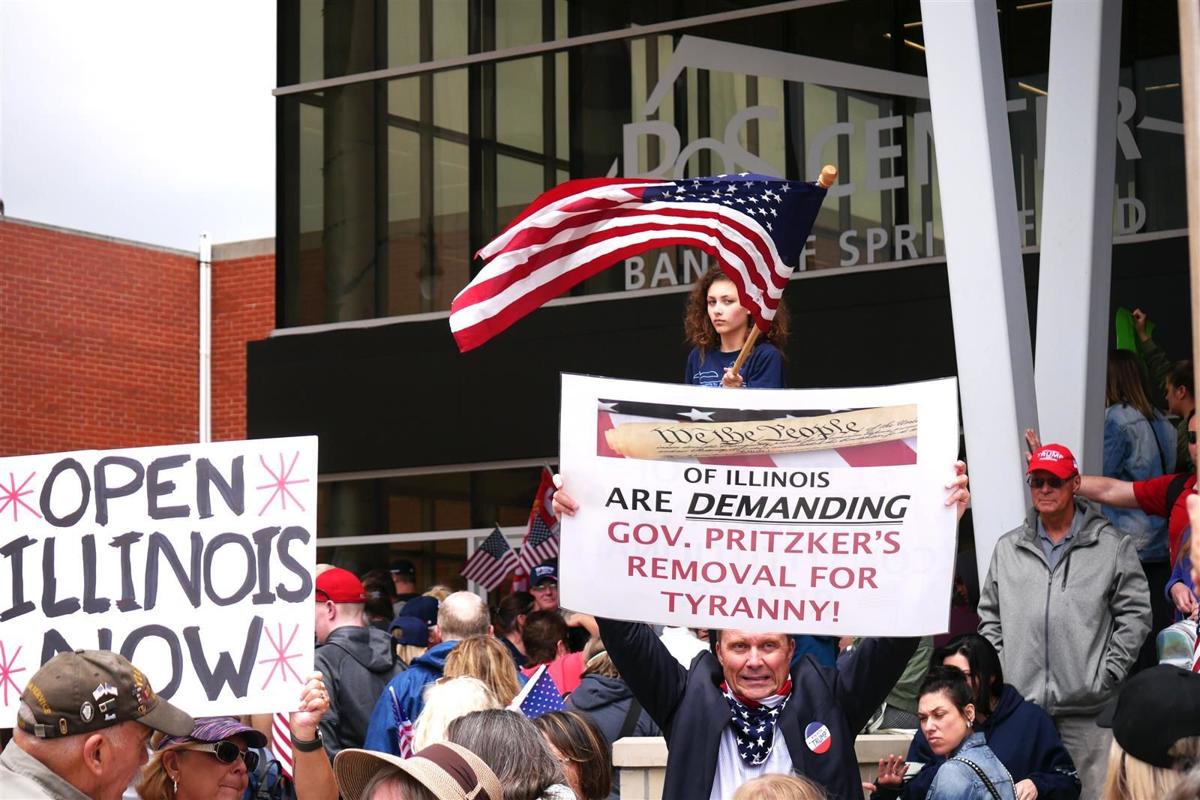 Protesters outside the Bank of Springfield Center in the capital's downtown call for Illinois to reopen sooner than the timeline provided in Gov. JB Pritzker's Restore Illinois plan. Members of the state House met inside the arena for the first of a four-day special session on May 20.

Above: Lawmakers prepare for an extended session of the Illinois House of Representatives on May 23 at the Bank of Springfield Center in Springfield. The House held the last four days of the spring session at the center instead of the Illinois State Capitol because it allowed for safe social distancing amid the COVID-19 pandemic. Below: Protesters outside the Bank of Springfield Center in the capital’s downtown call for Illinois to reopen sooner than the timeline provided in Gov. JB Pritzker’s Restore Illinois plan. Members of the state House met inside the arena for the first of a four-day special session on May 20.

Protesters outside the Bank of Springfield Center in the capital's downtown call for Illinois to reopen sooner than the timeline provided in Gov. JB Pritzker's Restore Illinois plan. Members of the state House met inside the arena for the first of a four-day special session on May 20.

SPRINGFIELD — It was a year like no other, and one most Americans would just as soon forget, but 2020 is sure to last in the history books as one of the most tumultuous in modern history.

It was a year when face masks and hand sanitizer became ubiquitous items of everyday life and when major sporting events that many Americans use to mark the passage of time were canceled or delayed.

It was also a year marked by racial and social unrest following the killings of George Floyd, Breonna Taylor and other Black Americans at the hands of police. And it was a year of economic catastrophe that brought about some of the highest unemployment rates the nation has seen.

For Illinois, the year seemed to begin on a hopeful note. The state was running a budget surplus for the first time in many years. By February, unemployment had fallen to an all-time low.

But things were about to change amid a backdrop of pandemic and government corruption scandals that rocked the foundation of power of the nation’s longest-serving state legislative leader.

On Jan. 24, a Chicago woman who had just returned home from Wuhan, China, where the COVID-19 pandemic originated, tested positive for the disease. A few days later, her husband tested positive as well, marking the first known instance of person-to-person spread in the U.S.

On March 9, Gov. JB Pritzker declared a statewide disaster and quickly began invoking his emergency powers with a series of executive orders including closure of K-12 schools to in-person learning and a statewide stay-at-home order that brought much of the state’s economy to a grinding halt.

By year’s end, COVID-19 had claimed the lives of more than 16,000 Illinoisans as the rapid distribution of a pair of vaccines marked new hope that the “beginning of the end” of the pandemic was near.

After more than three decades as one of the most powerful men in the state, Illinois House Speaker Michael Madigan faced an uncertain political future as 2020 neared its end.

His future as speaker and Democratic Party of Illinois chairman was first put in doubt on July 17 when officials at utility giant Commonwealth Edison admitted in court to a yearslong bribery scheme in which they sought to buy favor with Madigan — the latest in a series of bombshell investigatory revelations that have centered on Democratic state politicians since 2019.

The case sparked an internal House investigation in which Republicans sought to oust him from office, but that effort was thwarted when Democrats on the investigating committee — all Madigan loyalists — voted against recommending a disciplinary charge.

Madigan himself has not been charged criminally and has denied any wrongdoing.

But at least 19 members of the House Democratic caucus have said they will not vote to re-elect him as speaker, which would mean he is well short of the 60 votes needed to win another term. No one else has yet emerged as a viable contender for the office, however, so it is unclear what will happen when lawmakers reconvene in Springfield this month to choose a speaker for the 102nd General Assembly.

Leadership changesWhile there is some uncertainty about whether Madigan will serve as speaker next year, a leadership change would make House Republican Leader Jim Durkin the General Assembly’s most tenured leader.

Durkin, who hails from Western Springs, has been House minority leader since 2013. That caucus indicated it will back him again in January after a brief challenge from Rep. Tony McCombie, from Savanna, who eventually backed Durkin.

While 2020 began with a leadership change on the Democratic side in the Senate, it ended with a change in Republican leadership in that chamber.

After former Senate President John Cullerton announced plans to retire in 2019 after 11 years, Sens. Kimberly Lightford, from Maywood, and Don Harmon, from Oak Park, emerged as top contenders to fill the remainder of Cullerton’s two-year term. Ultimately, Harmon secured majority support from the Democratic caucus and was elected on Jan. 19 following several hours of behind-the-scenes negotiations. Harmon’s fellow Democrats indicated earlier this month they would back him for another two-year term come January.

Senate Minority Leader Bill Brady, from Bloomington, announced in early November his plans to step down from Republican leadership in the Senate after three years, and members of the caucus chose Sen. Dan McConchie, from Hawthorn Woods, as his replacement. McConchie has served in the chamber since 2016.

The new year will also see challengers emerge for governor and other state constitutional officers, as candidates have already begun to announce their intentions for a statewide run.

Despite the pandemic, Illinois voters went to the polls in record numbers in 2020, opting for Democrat Joseph Biden over incumbent Donald Trump by a 58-41% margin.

Nearly 6.1 million ballots were cast in the November election — the largest number recorded in Illinois — after state lawmakers passed a measure greatly expanding access to mail balloting for the 2020 general election in response to the pandemic.

Republicans scored some big wins by defeating Pritzker’s proposed constitutional amendment to allow a graduated income tax and by ousting Supreme Court Justice Thomas Kilbride, setting up a GOP effort to take a one-seat majority on the high court in 2022.

Legislatively in 2021, Pritzker and the General Assembly are facing a $3.9 billion revenue shortfall, due largely to the financial impact of COVID-19 and the failure of the graduated income tax, and they are bracing for difficult choices to cut spending, raise revenue or some combination of both.

Pritzker has proposed $700 million in spending cuts as a “first step” to address the budget holes. His administration also announced plans to borrow $2 billion through a federal program to cover revenue losses and unforeseen COVID-19 expenses for the current fiscal year, but other difficult budget decisions loom in 2021.

The state’s two main storylines of 2020 — scandal and pandemic — have also contributed to the derailing of a potential massive overhaul of the state’s energy landscape. The Clean Energy Jobs Act and other energy reforms could be near the top of the agenda when lawmakers return for a 2021 session as well.

Initiatives of the Illinois Legislative Black Caucus will also be at the top of the state government agenda in 2021 following a tumultuous 2020.

The agenda, aimed at ending systemic racism in Illinois, comes amid the backdrop of massive protests against police brutality and racial inequality, as well as the COVID-19 pandemic that disproportionately infected and killed Black and Latino Americans.

From September to October, the Black Caucus held more than 100 hours of hearings to inform potential legislation, some of which caucus leader Lightford said will be brought forth for January’s lame duck session before the swearing-in of new lawmakers.

The effort was partially in response to prolonged social unrest following the May 25 death of George Floyd, who died after a Minneapolis Police officer knelt on his neck for over 9 minutes. Protests began the next day in Minneapolis and quickly spread to cities across the country.

That unrest led Pritzker to deploy the Illinois National Guard to Chicago on May 31 after a weekend of large-scale protests devolved into violence in some areas.

Meanwhile, Cook County State’s Attorney Kim Foxx drew national attention for dropping charges for minor and non-violent offenses for hundreds of protestors, and President Trump engaged in high-profile disputes of rhetoric with Chicago Mayor Lori Lightfoot and Pritzker over the deployment of federal authorities to Illinois to clamp down on protests. While widescale intervention was avoided, some federal officers were deployed to aid ongoing law enforcement efforts to combat gun and drug crimes.

Ultimately, the protests which lasted from May until early November became the largest in U.S. history with an estimated 15 to 26 million participants across the country, with more protests taking place worldwide.

In 2019, the Cannabis Regulation and Tax Act legalized the sale and use of recreational marijuana in Illinois, and in legalization’s first year, sales were expected to reach $1 billion, yielding more than $100 million in state and local tax revenue.

There’s plenty of room for those numbers to grow, as at the start of 2020 the state had issued only 30 licenses for recreational dispensaries to firms that were already licensed as medical dispensaries.

Despite the promise that 75 new licenses would be awarded to social equity applicants in an effort to diversify the industry, the pandemic and a number of lawsuits delayed the process. While no additional licenses were awarded in 2020, the state won a lawsuit in November that could allow the program to move forward in 2021.