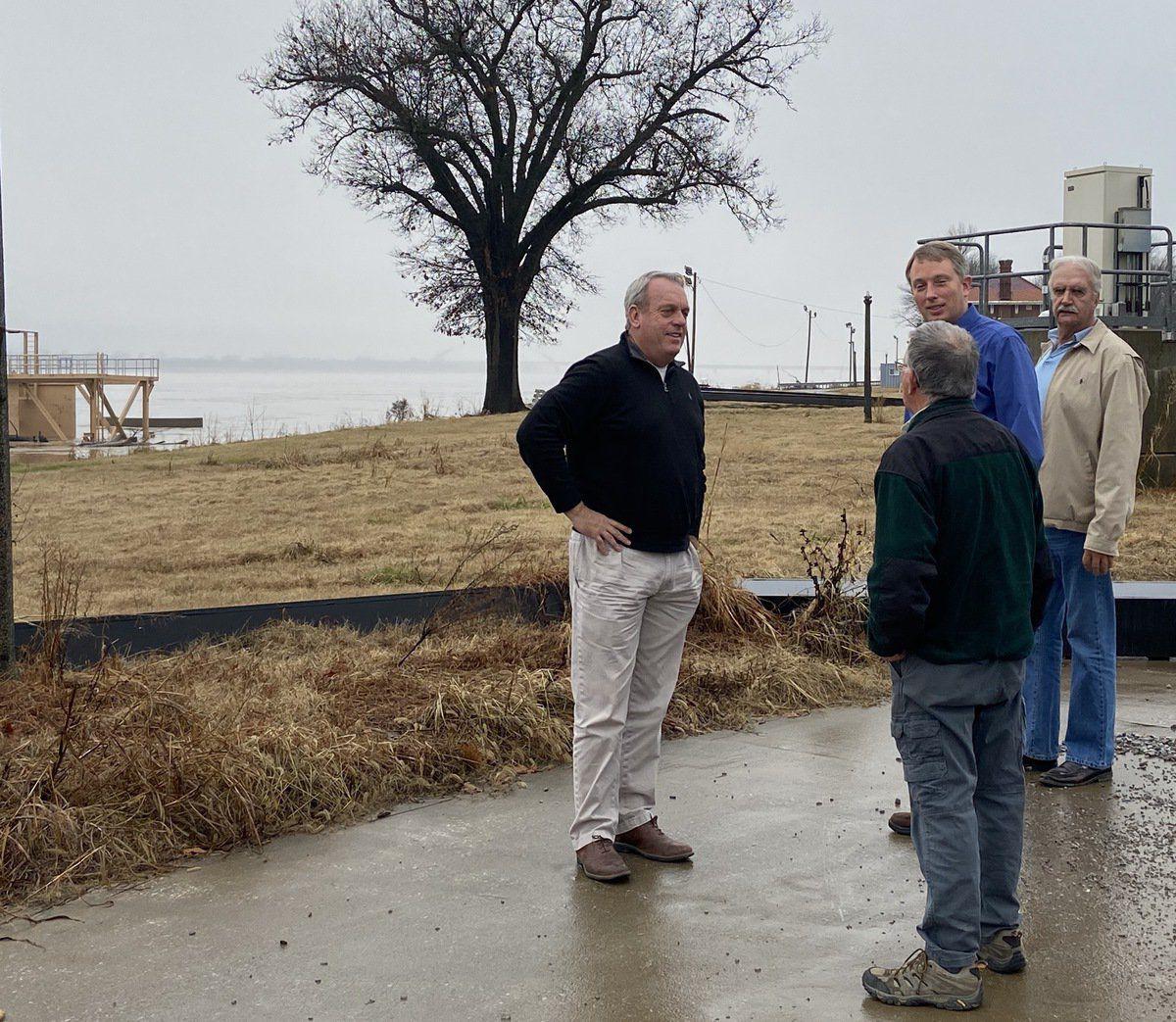 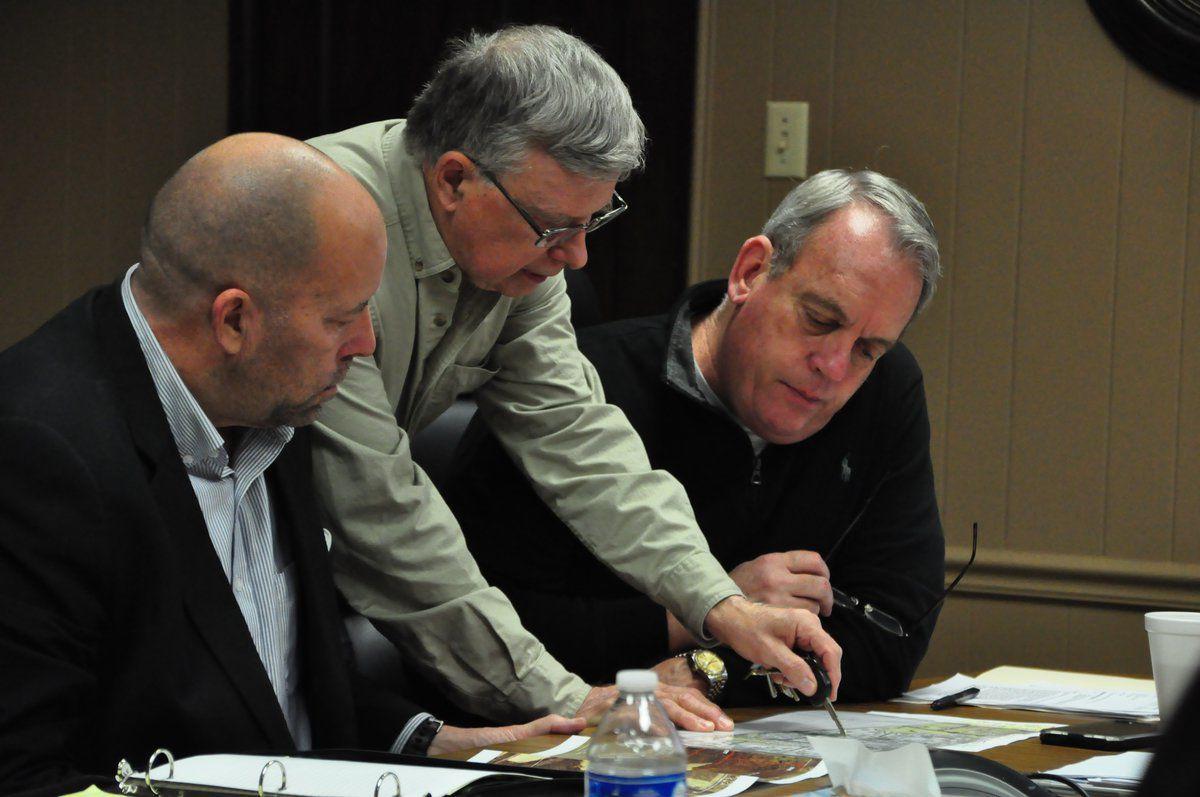 Scott Garrett, executive director of the Massac-Metropolis Port District, center, shows Illinois Sen. Dale Fowler, right, and Andrew Sisulak, assistant to Fowler, where a potential Strawberry Road expansion would be on a map during the hour-long round table discussion.

Scott Garrett, executive director of the Massac-Metropolis Port District, center, shows Illinois Sen. Dale Fowler, right, and Andrew Sisulak, assistant to Fowler, where a potential Strawberry Road expansion would be on a map during the hour-long round table discussion.

Although the former Dam 52 is still in the process of being dismantled, the Massac-Metropolis Port District (MMPD) has its sights set on trying to obtain the property, as Executive Director Scott Garrett explained on Jan. 3 during a roundtable discussion of city and county leaders along with Illinois Sen. Dale Folwer and Illinois Rep. Patrick Windhorst.

MMPD Chairman Richard Kruger welcomed port district members, Massac County Commissioners Jayson Farmer, Jeff Brugger and Jerel Childers and Metropolis Mayor Billy McDaniel. The group met in council chambers with Fowler and Windhorst to discuss the future of the old Dam 52 property. Garrett explained one project the port district is looking at is a road extension of Strawberry Road, which would also be an improvement to the George Rogers Clark Discovery Bike Trail.

The benefit would re-route a portion of the bicycle trail along the proposed right-of-way. Currently there are about two and a half miles of the trail on county roads. The new route would reduce the distance on county roads, thus enhancing bicyclist safety as well as providing riders with a more scenic view.

Garrett said from his discussions with the Army Corps of Engineers, the demolition of the dam is behind schedule. The Corps had hoped to have the demolition done by December 2020.

However, with the delay, Garrett said the Corps has indicated the demolition might be finished by June or July of 2021. After that, there will be several inspections. Only after the inspections can the Corps vacate the property, which lies within Massac County.

According to Garrett, the Brookport City limits stops at the road leading to the Dam 52 site.

"It's never to soon to start planning for the future," said Garrett, who explained the road extension would be six-tenths of a mile, would create a faster route from Dam 52 to the Interstate 24 exchange and would eliminate the need for traffic to go through Brookport in order to get to the interstate.

"I think the future for Massac County is very bright. It's not going to happen over night," said Garrett.

He told those gathered he had asked Massac County Highway Engineer Joe Matesevac for a "ballpark estimate," as to how much the road extension would cost, and he had calculated a little over $5 million.

A question was raised about whether or not the Corps might sell the property. Garrett said there is a long list of steps the Corps must go through and at the bottom of the list is selling the property through a private sale.

Because the MMPD is a county-wide agency, Garrett said the port district is seen as the best vehicle for economic development for the property and stands a good chance at being given the Dam 52 property.

Garrett pointed out in the presentation the site could be used for:

In the MMPD's presentation, the funding sources are directly dependent upon the nature of site development, but it could come from private or public funding or a private-public partnership.

Garrett mentioned the best route for the road expansion happens to run through a portion of his property, which is adjacent to Illinois Department of Natural Resources-owned land. He emphasized he has no intention of gaining financially from the project but would entertain a land swap with IDNR in exchange for giving up some of his property for the road extension.

"I support the Massac-Metropolis Port District trying to get ownership of the Dam 52 property and utilizing it for industrial or agricultural use. This process will take time, but with patience, it could turn out to be an excellent opportunity for the community," said Jayson Farmer, Massac County Commission chairman.

Following the hour-long discussion, Garrett took Fowler, Windhorst and Childers on a tour of the Dam 52 site and to show the officials the location of the proposed road expansion.

Garrett says both Fowler and Windhorst were receptive to the road extension project and support MMPD in trying to acquire the Dam 52 property and notes regardless of who ends up with the property, the road extension would be an economic benefit.

"I would like to thank the Massac-Metropolis Port District for the presentation on their plans for a potential project at the Dam 52 site. While still in the planning stages, this development is promising and my office is willing to assist the port district in moving the project forward," said Windhorst.