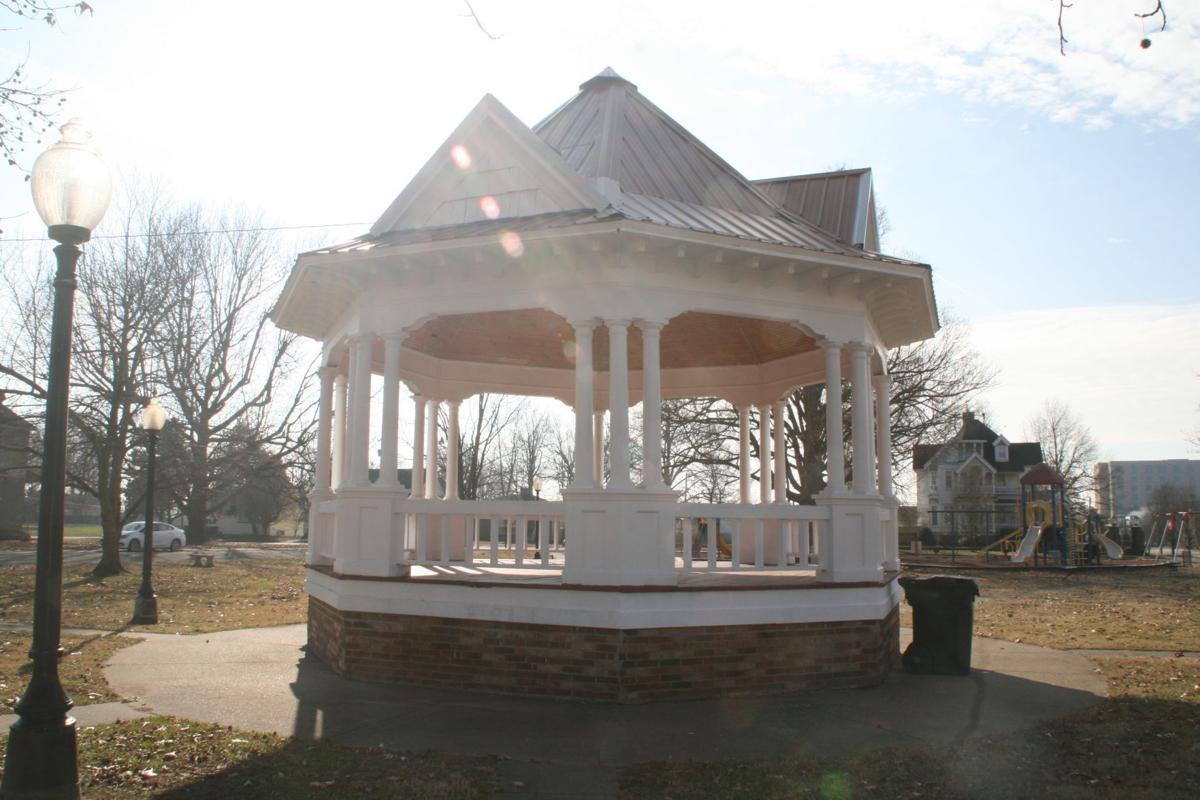 Work on the Washington Park gazebo in Metropolis is practically complete. The cap at the peak will be painted in the spring. 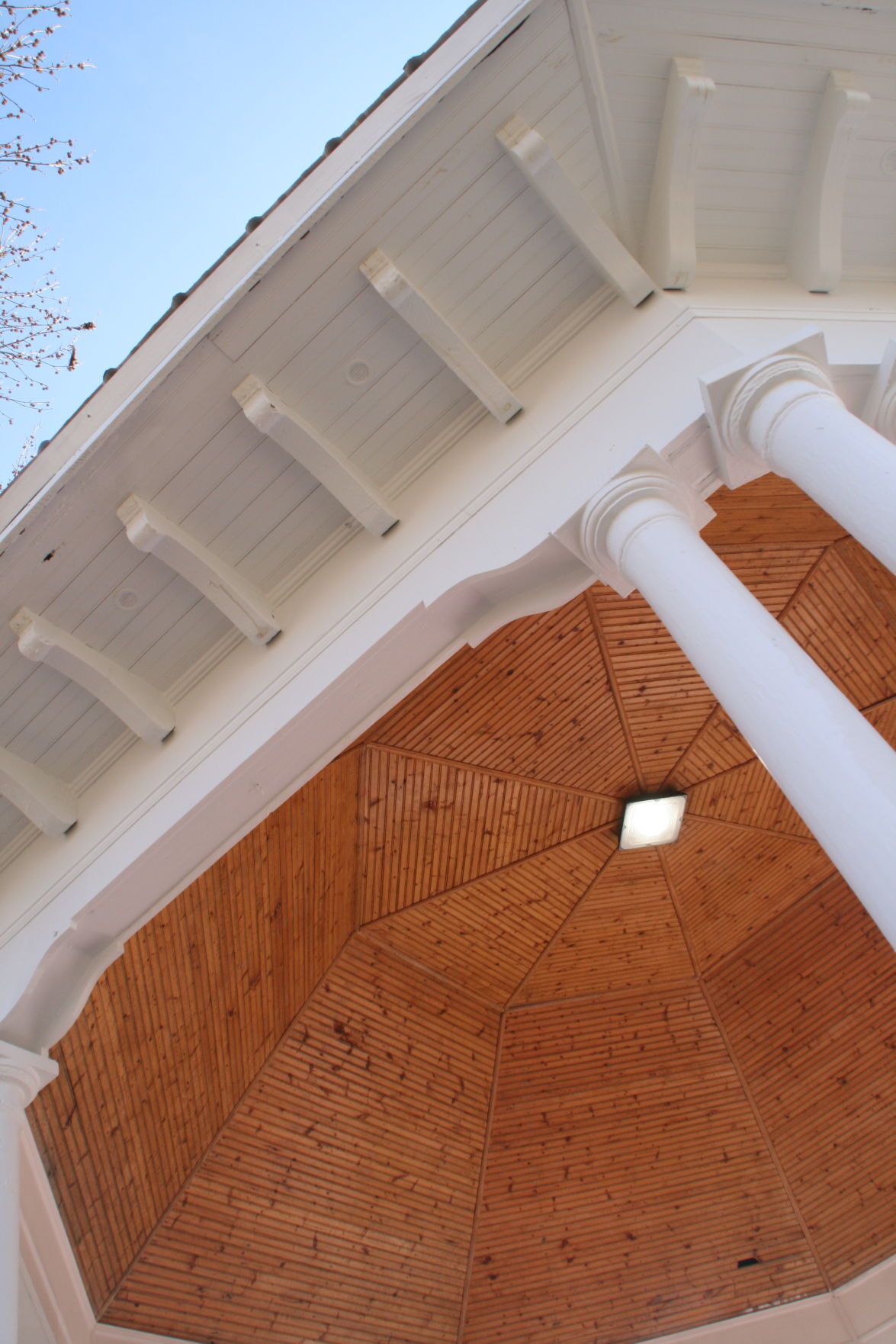 While the exterior of the Washington Park gazebo was kept in its original colors, the ceiling’s natural wood was left unpainted.

Work on the Washington Park gazebo in Metropolis is practically complete. The cap at the peak will be painted in the spring.

While the exterior of the Washington Park gazebo was kept in its original colors, the ceiling’s natural wood was left unpainted.

For years, with its location on Metropolis Street just blocks from the Ohio River, the Washington Park gazebo has been a central part of the Metropolis landscape.

Built in the early 1900s — estimates range from 1901 to 1910 as records on the park are scant — the gazebo has been the spot of concerts, public speaking during celebrations, religious revivals and, of course, weddings.

Over the years, the now 110- to almost-120-year-old structure has undergone several layers of maintenance from paint to roofs. It was restored by a Massac County High School building and trades class in the 1990s, but that was blown down later by straight-line winds, which meant the gazebo had to be rebuilt.

Recently, employees with Link Tree Removal & Carpentry, located in Olive Branch and owned by Link Warren, spent several weeks renovating the gazebo, bringing the structure as close to its original glory as possible.

The structure was power washed before being painted a fresh white with the floor and stairs a stained red.

The refurbishing work included an inspection that showed the brick foundation was in good shape, but several wooden parts needed to be replaced. After jacking up the pillars and posts, the wood flooring was replaced.

“As boards were taken out, they were put back with true timbers that were cut on an inch scale — it was a 2x2 not a 1¾ x 1½,” Metropolis Mayor Billy McDaniel explained. “The original boards that were used on that are 50 years old or older.”

For the ceiling, “they were lucky enough that what boards had to be replaced, Mr. Warren had some on hand, and if you didn’t know, you couldn’t tell the difference,” McDaniel said.

Unlike previous renovations, this time the ceiling’s natural wood was left unpainted.

One of the structure’s biggest changes is its roof.

“Unfortunately, the only thing we couldn’t put back to what we wanted to make it truly authentic was the roof,” McDaniel said. “The slate wood roof, you can’t keep moisture out from underneath it, so after we started puling the shingles off, we realized part of the decking was rotten in places, and it had to be replaced.”

The decision was made to go with a copper-colored metal roof. While the copper will patina over time, “the material of that roofing changes colors as the sun shines on it — you can look from one angle and it looks gold; on the side the sun’s not hitting it, it’s darker, almost brown,” McDaniel noted.

Replacing the roof took some ingenuity.

“Not one sheet of decking or metal could be put on that structure that didn’t have to be cut,” McDaniel said. “It’s kind of an octagon shape with four true sides but no two sides were alike — there were fractions of inches it was off. Every single piece had to be hand cut and hand installed.”

McDaniel said the only thing left to be done is painting the original copper crown, capping the roof’s peak.

“We tried to polish it, but it wouldn’t come to a gleam. So when the weather gets better, Mr. Warren is going to spray paint it gold to help match the roof,” McDaniel said.

With the work on the structure, especially with the metal roof, “it will last for years with good maintenance,” McDaniel said. “We’ve something that will last for future generations.”

The work to the gazebo cost approximately $4,000.

“I do want to commend Mr. Warren. He did a tremendous job. He, himself, had over 140 hours of just planning, getting lumber and making sure it was done right,” McDaniel said.