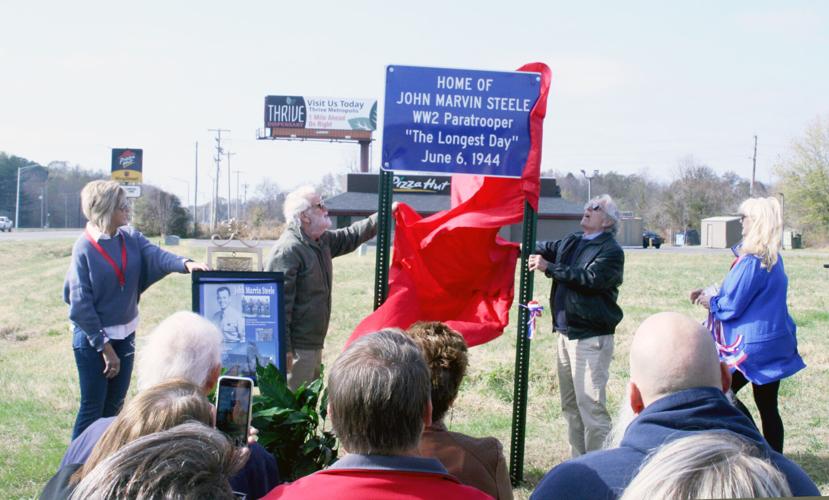 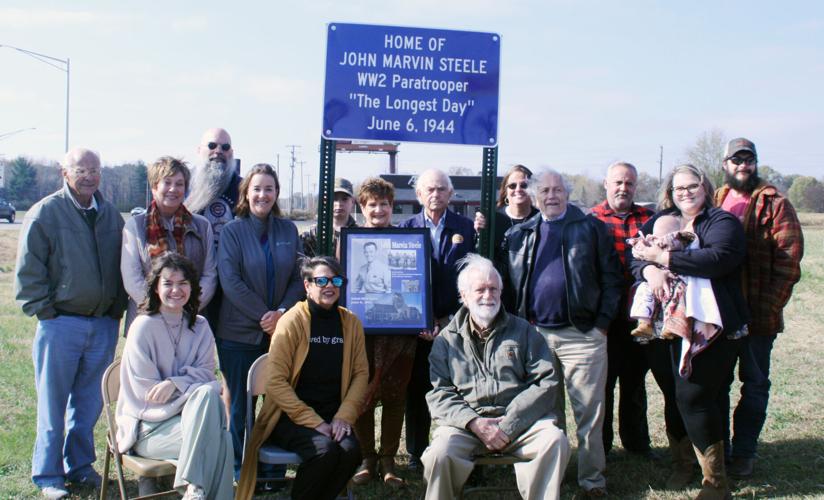 Vicki Mayhall is a self-proclaimed World War II nerd. So when she went to France last year, there was no question that she would be visiting Sainte-Mère-Église.

What surprised her was what she saw — almost every building having some sort of mention of John Marvin Steele — and how she was greeted when citizens learned she is from Steele’s hometown.

Even 78 years later, to the people of Sainte-Mère-Église, Steele is a hero.

“They don’t think John belongs to Metropolis; he belongs to Sainte-Mère-Église,” Mayhall said.

Seeing those honors, Mayhall wondered why Steele’s hometown had very little recognition of the man who made one of the most famous parachute jumps in history.

“This is just the first step” of locally recognizing Steele, declared Mayhall, as the board’s next goal is for the City of Metropolis to become a sister city with Sainte-Mère-Église and it has the ultimate goal of placing a life-sized bronze statue of Steele, which will also honor the Massac Countians lost in World War II, on the Massac County Courthouse lawn.

“Help us recognize John. Help us thank John’s family for sharing John with us,” Mayhall said.

Pvt. Steele was a paratrooper in the 82nd Airborne, 505th PIR, Company F. He and his stick of paratroopers were supposed to jump on the outskirts of Sainte-Marie-du-Mont and take control of it from the Germans to protect the flanks of the men who would be storming Utah Beach at dawn on Tuesday, June 6, 1944.

Instead, he landed on a church in Sainte-Mère-Église. His parachute tangled in its bell tower for two hours before the Germans cut him down and took him prisoner. Four days later, while being held at an enemy command post, he escaped through a window, made it back to Allied lines, was transferred to a hospital in England and came back to make other parachute jumps — including in Operation Market Garden, an Allied military operation fought in the Netherlands from Sept. 17-27, 1944. He rose to the rank of sergeant. His story was part of the book and movie, “The Longest Day.”

Steele returned to Metropolis for a brief time following the war, before moving to North Carolina, where he passed away at the age of 57 in 1969. He’s buried in Metropolis’ Masonic Cemetery.

While he’s known to the world as John Steele, his family knows him as Marvin.

And brothers Stan and Phil Chase, both now of Paducah, have some very special memories of their Uncle Marvin. It was they, veterans themselves, who had the honor Friday of unveiling the sign placed in his memory and in honor of his legacy.

“This has been a long time coming,” Phil Chase said, just after unveiling the sign. “We’re very proud and very happy and very thankful for this group.”

Steele lived with the Chase family after retuning from the war. His sister Velma was the Chase brothers’ mother.

“It was fun to have him there all the time because he was always fun. We missed him when he moved away. He always took us on his escapades,” Stan Chase said. “He was such a bigger than life figure. Always had a smile. He had faults like all of us, but he was always the kind of guy you were glad to see. I think anybody in Metropolis would say that. He never met a person he didn’t enjoy meeting.”

Like many World War II veterans, Steele didn’t talk a lot about his experience. “You had to press him on anything like that,” Stan Chase said, noting Steele “couldn’t believe” how the people of France embraced him. “The first time he went over there for a D-Day celebration, he couldn’t believe it — a hotel named after him, all kinds of Steele stuff in that little town, and it’s probably about the size of Brookport. But they all loved him.”

“There are no words,” he answered when asked what Friday meant to the family.

Steele was 30 when he entered the Army. “He just jumped right in. He signed up as soon as he could,” Phil Chase said.

But he wasn’t the only Steele from Metropolis to enter World War II. Two of his brothers were there, too. James was a Marine. Norman, barely 20, was killed after the treaty ending the war was approved, Phil Chase said, describing Friday as an “extremely gratifying, bittersweet day.”

“We’re all glad and happy these young folks have taken this on — and none of them are family, that’s the neat thing about it. We’re just very thankful,” he said, adding the day meant “everything” to him. “It’s bittersweet because of all the people who died before Marvin. He was a great guy. He represents what’s good about World War II veterans. He never, never mentioned it. So humble.”

“I don’t even have the words for it,” she answered, when asked what Friday meant to her. “I never even dreamed that something like this would come about. He would be so humbled, but elated over the fact this has been done in his honor, as my dad and his other brother who fought over there would. It’s awesome.”

The City of Metropolis donated two “Home of John Marvin Steele” signs and placed them at both entrances of the city on Highway 45.

Project board member Karla Ogle thanked Metropolis Mayor Don Canada and the city. “Mayor Canada jumped on board so quickly with us. When we came to him with the sign idea, we said, ‘We’d love to do this and unveil it on Veterans Day.’ He made it happen. It was ordered, delivered and installed last Friday (Nov. 4),” she said. “We appreciate his support for our project.”

Mayhall thanked the Massac County commissioners for donating a spot on the courthouse lawn for the Steele statue.

Metropolis alderman Jeremy Holley spoke on behalf of the city. He thanked the Steele family for being present and allowing the recognition to be held. He also thanked the project board — Mayhall, Ogle, Debbie Hillebrand, Kaley McGinnis and Brian Horn — for their dedication. “This is a very good step in celebrating Metropolis’ positive attributes. We have something to be proud of,” Holley said.

Horn, the county’s EMA director, spoke on behalf of Massac County government during the ceremony, thanking the city for erecting the sign.

“It is truly a privilege to to honor the sacrifices made by John Marvin Steele and the other Massac County residents who, back in the 1940s, answered the call of their nation to fight for liberty, freedom and justice for all, paying the ultimate price so we can all stand here today in dedication of their service,” Horn said.

“This sign is the physical milestone that represents the beginning of a community-wide endeavor to honor and preserve the history of Massac County’s heroes, like John Marvin Steele. The John Marvin Steele Memorial Project is larger than any of us standing here today. This fact alone ensures our project will be successful. One day, in the not too distant future, we will be standing on the courthouse lawn dedicating his statue in a manner much like this, and we will remember this moment — when we all stood around this sign that represents the first milestone.”

COVID on the rise again