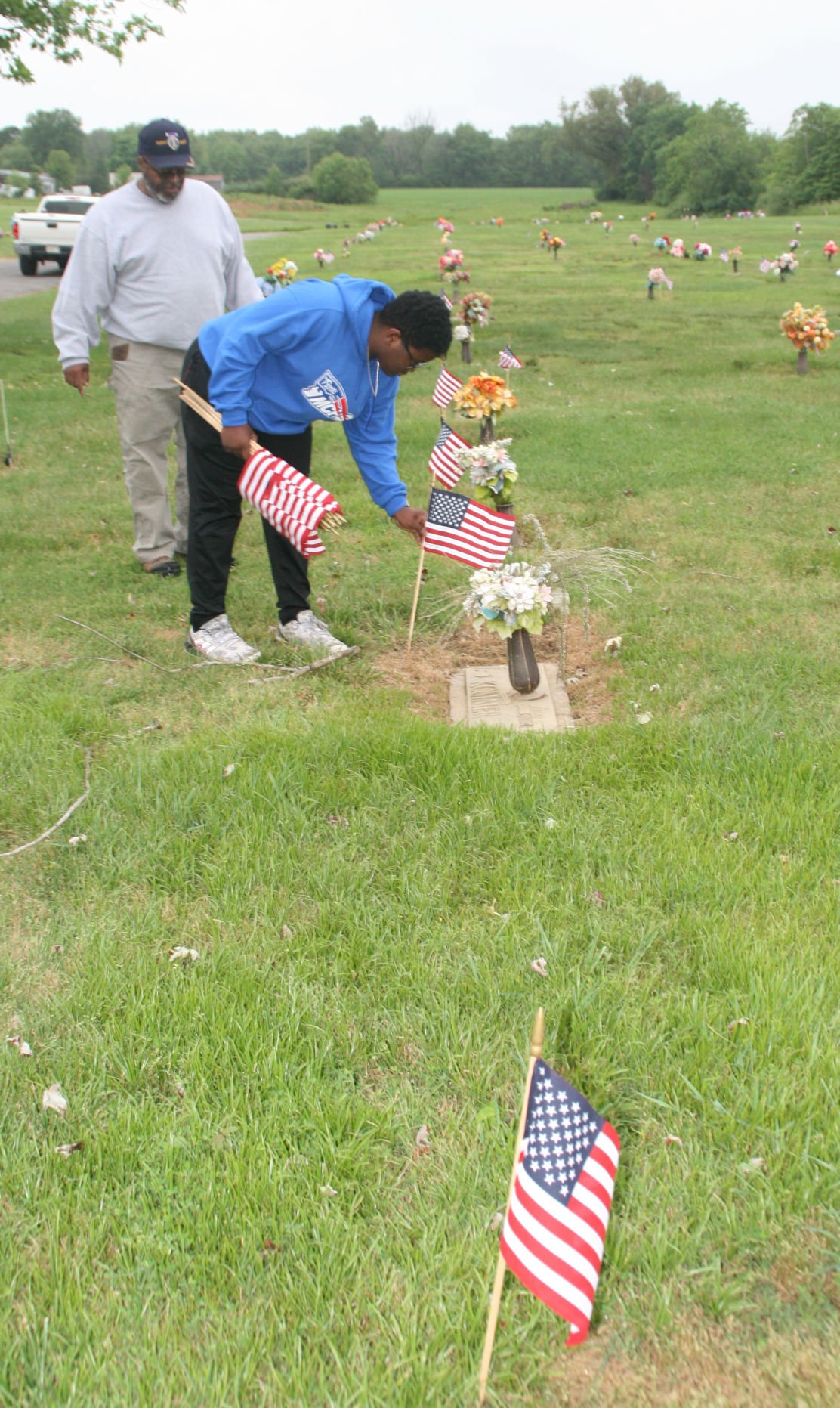 Robert Puckett watches his son, Christopher, place a flag on the grave of James W. Kommer, who served in the Army. First-time volunteers, the Pucketts, of Metropolis, were among the 45 volunteers who assisted Metropolis’ American Legion Post 306 place flags at the graves of Massac County’s veterans and those who died in action on Saturday in observance of Memorial Day. 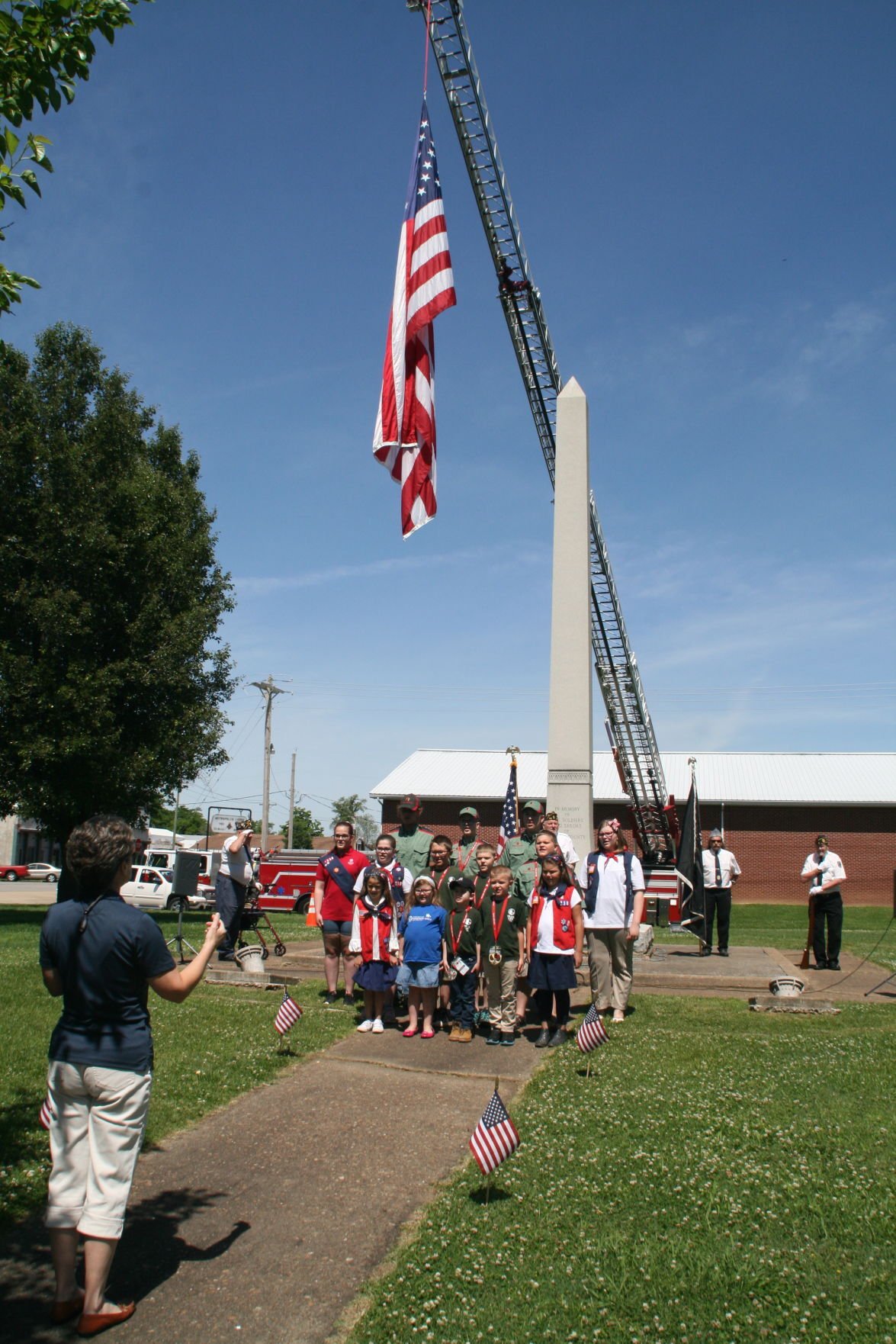 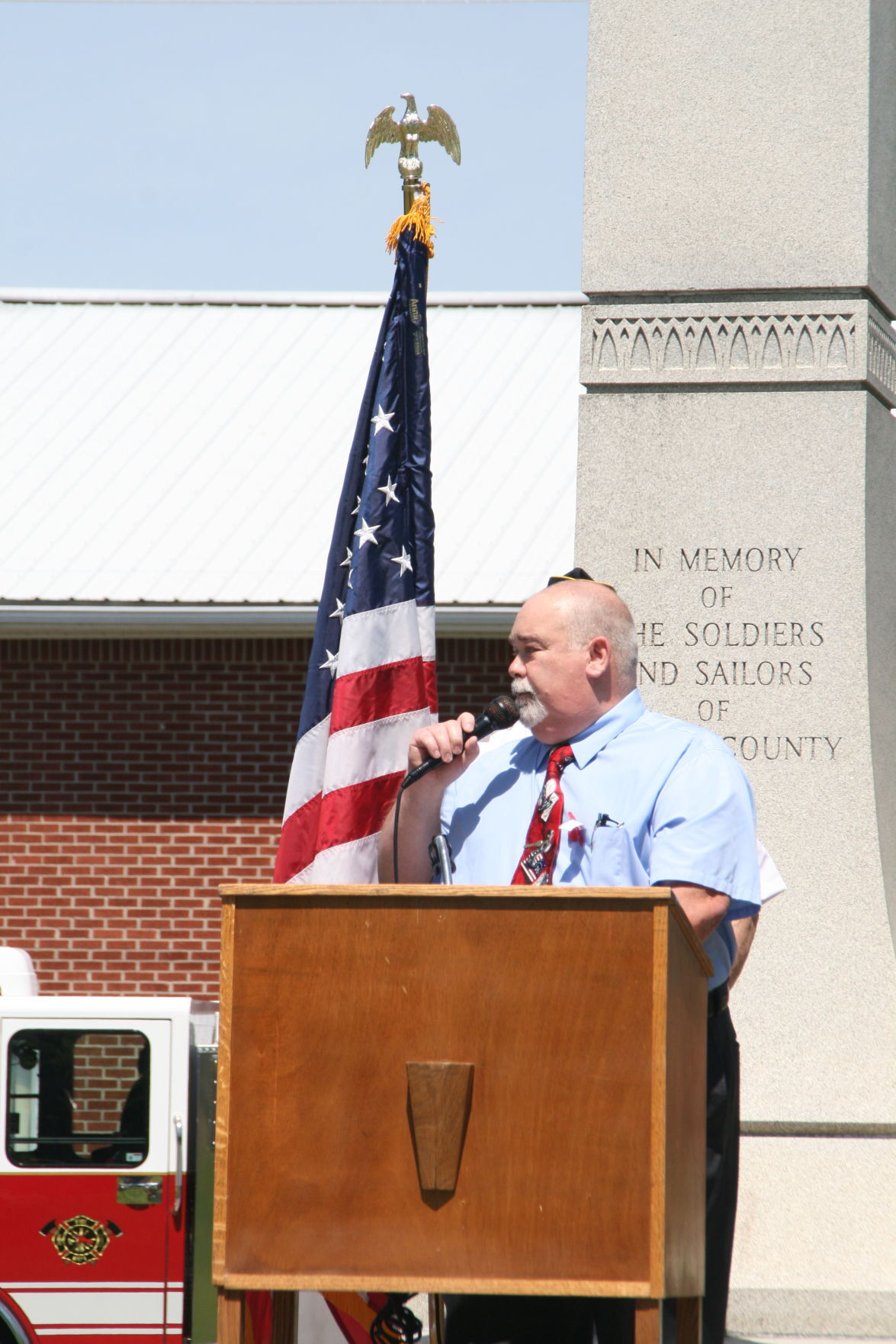 Robert Puckett watches his son, Christopher, place a flag on the grave of James W. Kommer, who served in the Army. First-time volunteers, the Pucketts, of Metropolis, were among the 45 volunteers who assisted Metropolis’ American Legion Post 306 place flags at the graves of Massac County’s veterans and those who died in action on Saturday in observance of Memorial Day.

From gathering with family and friends to holding barbecues to marking the traditional start of summer, the Memorial Day weekend has become holiday of unwinding for many.

But, “this is not just a long weekend to be enjoyed — it is a time to honor those who have died, who have given their lives for the freedoms we enjoy,” said David “Buck” Siere, pastor of Brookport Baptist Church, as he spoke Monday during the annual Memorial Day service hosted by Metropolis’ American Legion Post 306 at Veterans’ Memorial Park.

According to statistics, 1,304,684 Americans have died in war, from the Revolutionary War through the War on Terror.

“These are men and women who loved their country enough to fight for her,” Siere said. “These were men and women who went to war with expectation of coming home to their loved ones. If it were not for those brave men and women, we would not have the country we have today. We owe them a great debt of gratitude for their sacrifice.”

Beginning as Decoration Day in 1868 and becoming Memorial Day in 1968, the last Monday in May, “helps us remember the cost for our freedom. This is a day of remembrance. Let us never forget the sacrifices that were made for us.”

Emcee Lyle Lieb, the Legion member who organized Monday’s service, noted: “We often talk about those on the frontlines of the military, but what about those behind the scenes? There have been a lot of behind-the-scenes personnel who have been killed through the wars. We need to remember them as well.”

Lieb used the example of Adrian Cronauer, a DJ assigned to an U.S. Armed Services radio station in Vietnam in 1965, on whom the 1987 movie “Good Morning, Vietnam” is inspired. Lieb noted Cronauer “gave the troops comfort and something to look forward to every day.” Cronauer served from 1963-67, ultimately becoming a U.S. Air Force Radio and Television Broadcasting Specialist; he passed away in 2018.

“We have to remember: Freedom is not free,” Lieb said.

American Heritage Girls Troop IL 1230 and Trail Life USA Troop IL 2343 sang the national anthem. The service ended with a 21-gun salute by the Legion’s honor guard and the playing of “Taps.”

From first-time participants to yearly volunteers, around 45 people showed up Saturday to assist Metropolis’ American Legion Post 306 place flags at the graves of Massac County’s veterans and those who died in action.

Massac County has around 2,000 of those grave sites at the three cemeteries in Metropolis — Metropolis Memorial Gardens, IOOF and Masonic — and the 30 scattered throughout the county.

“Part of our duty is to honor our veterans,” said post commander Jeff Crippen. “We take that very seriously. We want to recognize all the people who served this country.”

Brothers Steve and Tom Walters, both of Metropolis, are among those who yearly assist the organization.

“I enjoy doing it and seeing how they served,” Steve Walters said.

Robert Puckett and his son Christopher, both of Metropolis, were among this year’s first-time participants.

“They said they needed volunteers, and I figured this is something I could start doing yearly,” said Robert Puckett, a veteran himself,

“This is a nice thing to do for the people who died and served in the war,” said Christopher, who will be a sophomore at Massac County High School.

Karen Cox, of Metropolis, first started helping two years ago. Her father and two brothers are veterans. Her father-in-law served in World War II and was on the first boat to land on Normandy.

David Park, a veteran himself serving 24 years in the Navy, said his father and three of his uncles served during World War II. Park, of Metropolis, has assisted for several years in the event, held the Saturday of Memorial Day weekend.

Metropolis Boy Scouts assisted the Legion by picking up the flags on Tuesday.

“We really appreciate their help,” Crippen said. “We also furnish flags for any family who wants to come and get one and put it on their loved one’s grave.”