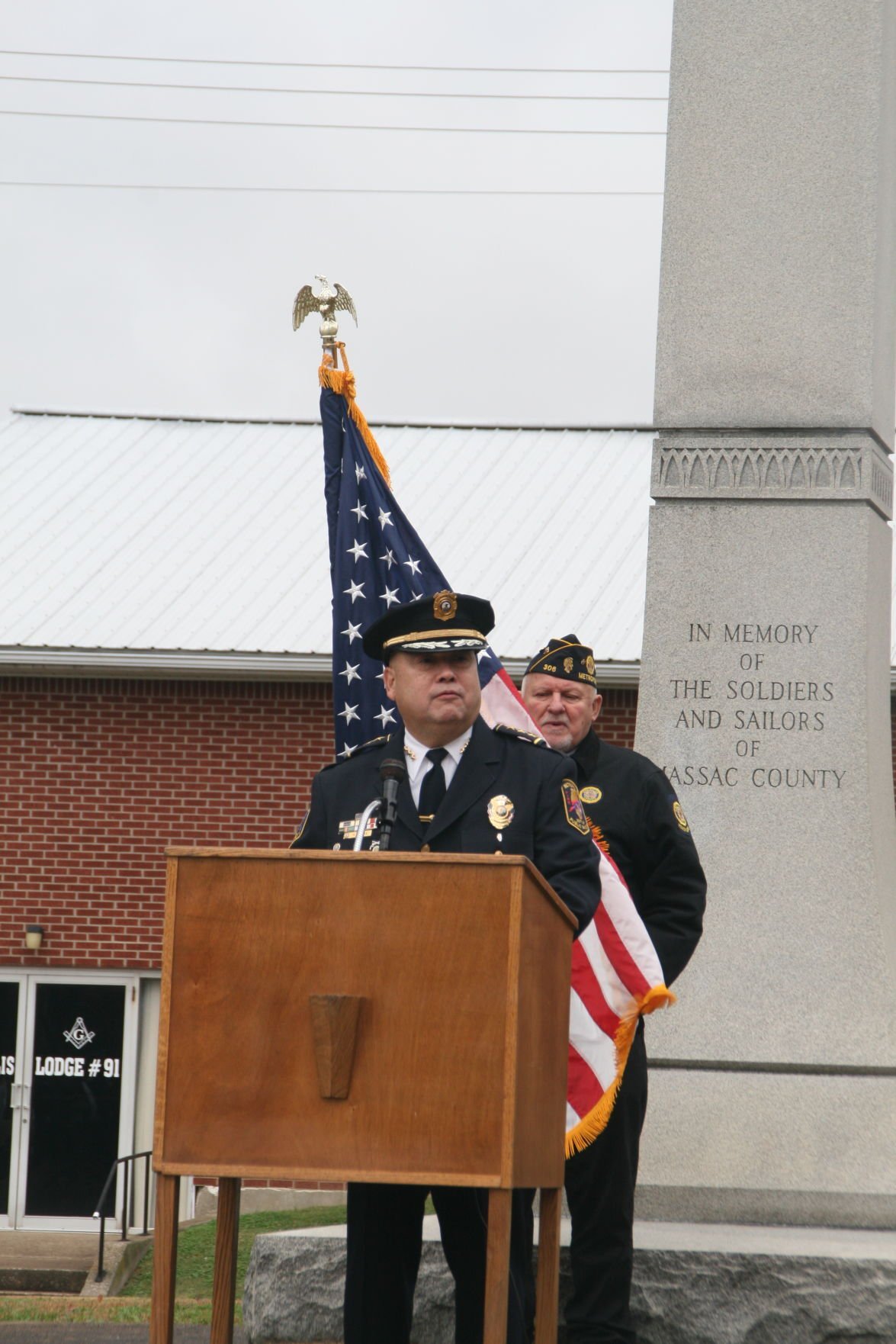 Chief Harry Masse, Metropolis Department of Public Safety director, takes the podium at the annual Veterans Day program. Masse served in the Army from 1977-1980 as a military policeman in the MP Corps. 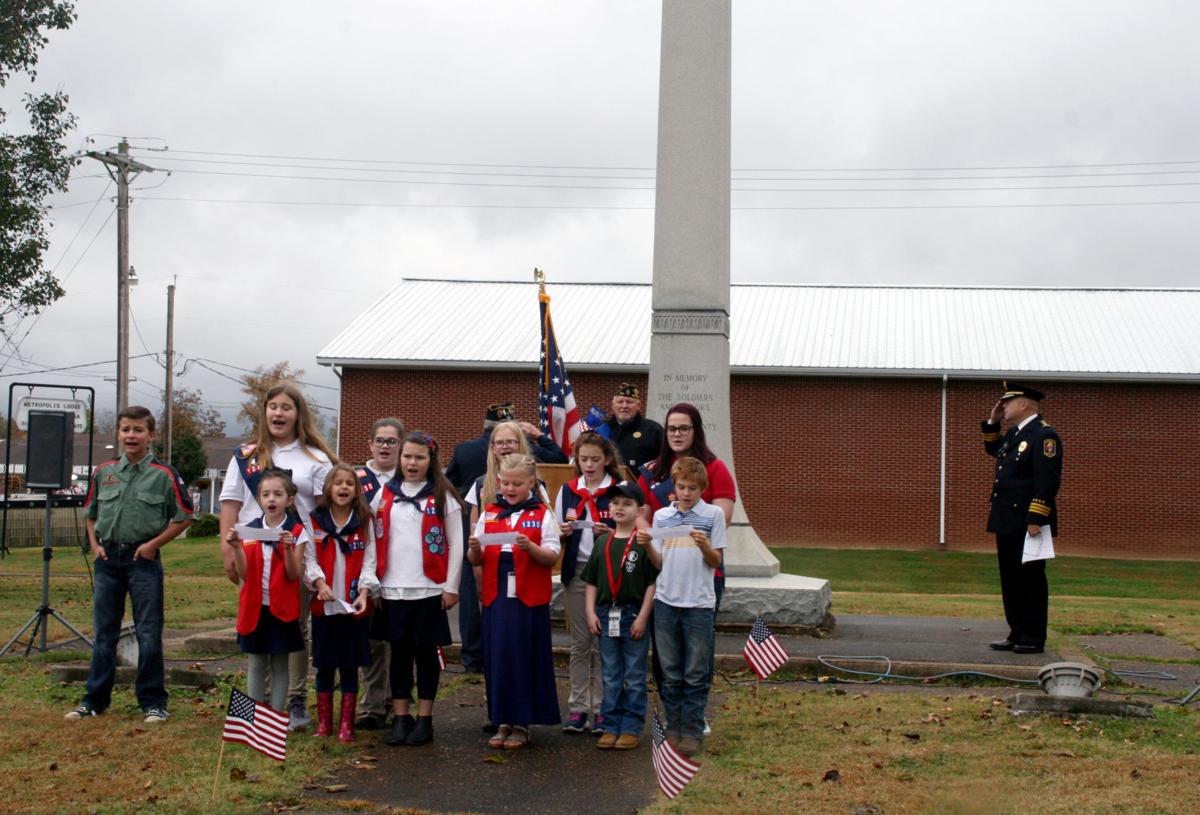 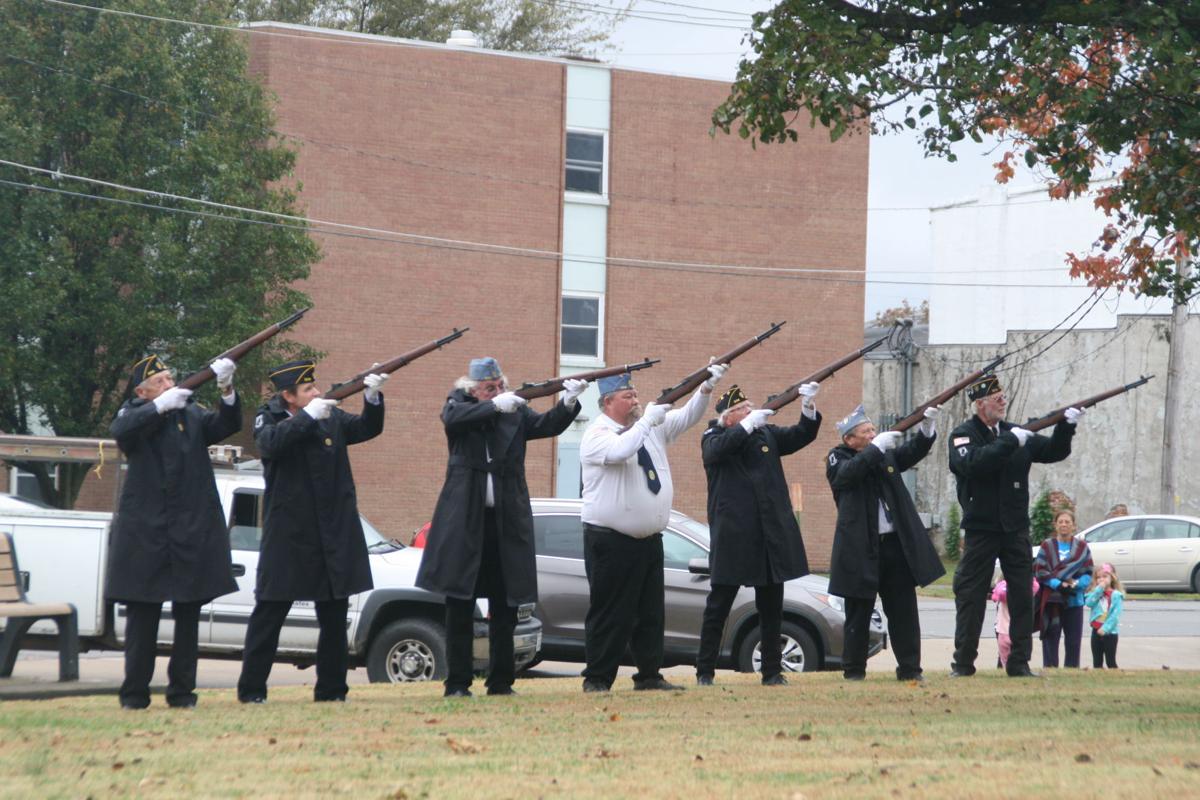 The American Legion Post 306 honor guard salutes “our veterans who have gone before us,” said program organizer Lyle Lieb. 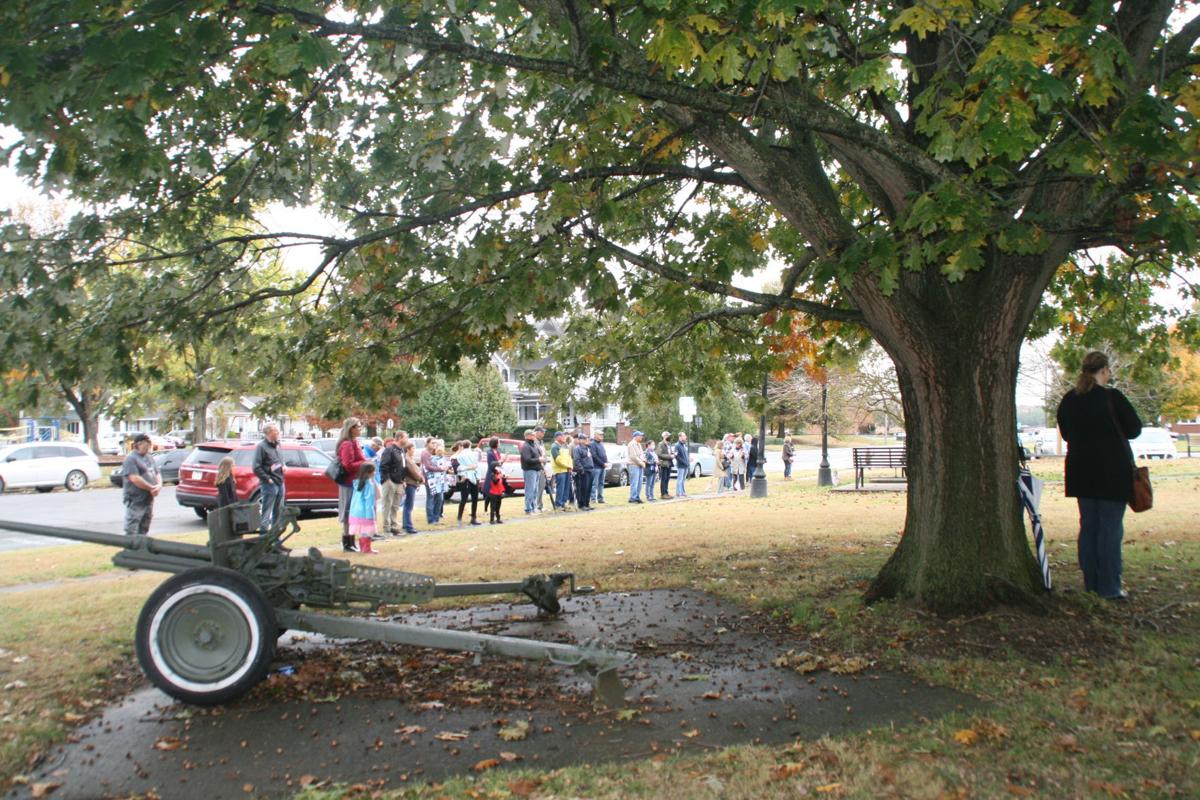 Chief Harry Masse, Metropolis Department of Public Safety director, takes the podium at the annual Veterans Day program. Masse served in the Army from 1977-1980 as a military policeman in the MP Corps.

The American Legion Post 306 honor guard salutes “our veterans who have gone before us,” said program organizer Lyle Lieb.

Harry Masse was young — “very young” — when he enlisted into the U.S. Army.

“But, unfortunately, Jimmy Carter was president, and we could barely afford a bullet. My bubble did get kinda burst with Jimmy, and, I didn’t reenlist.”

Masse stayed in the Army for his required three years of active duty, 1977-1980, as a military policeman in the MP Corps. He served his five years of reserves and then got out.

But those eight years put Masse in a brotherhood.

And as a member of that brotherhood, he was “humbled and honored to say a few words on behalf of the veterans in Massac County,” during the annual American Legion Post 306 Veterans Day Program.

“We’re few in number, but we’re here today because veterans have given us our freedoms,” said program organizer Lyle Lieb, a member of American Legion Post 306. “I’m thinking about President Reagan and his immortal words: ‘Freedom is never more than one generation away from extinction.’ We have to make sure our children and grandchildren know the truth and what the truth stands for so they can can live it as well as we have.”

“We have Memorial Day to honor those who gave the ultimate sacrifice,” Masse said. “But for those who think the veterans didn’t give a sacrifice, obviously, you didn’t walk in our shoes.”

While the liberation of Grenada occurred during his enlistment, Masse never saw combat and his unit was never deployed.

“But I will say this, if I would’ve had the chance to go to Iran during the hostage crisis, I would’ve helped fuel the plane,” he said.

“Time goes quickly. I can’t believe it’s been 40 years since I first took an oath. I loved it, most of it. We can all think of those times where we wonder, ‘Why did I volunteer?’ because almost everyone, except for our Vietnam vets, were volunteers,” he continued. “As I like to say to other veterans, have you ever seen an expiration date on that oath? We still live to it today. I don’t believe there are any World War I veterans with us today, but, they’re still guarding us and protecting us from above. Soldiers don’t die, they have our backs some other way. I am proud to have served. I am proud to have served in the Army. I am proud to have served as a military policeman. And, I’m even more proud to serve as a veteran.”

Following his service in the Army, Masse continued serving the public, starting his civilian law enforcement career in Gratiot, Wisconsin, where he worked for eight months. From there, he moved to Elk Grove Village Police Department, Cook County, from 1980-1984. He joined the Illinois State Police in 1984, serving District 15 for 20 years and District 22 for nearly seven years, retiring with the rank of captain as ISP District 22 Commander on Oct. 31, 2011. He then served as the chief deputy of Pulaski County until Feb. 16, 2012. He became Metropolis police chief on March 2, 2012. When the Metropolis City Council combined police and fire departments in August 2017, Masse was appointed to Director of Public Safety.

“Time goes quickly when you don’t actually have to work,” he said. “I’ve been lucky that public service got into my blood at an early age, and it’s still pumping though my veins at this time.

“… We need to remember our roots and remember our reasons for why we are serving. … Words cannot express the gratitude we as a country owe to our veterans. We need to make sure our politicians support what (our veterans) need. We can’t abandon them when they protected us. There should not be any veterans who are homeless or hungry. It makes my skin crawl to think that we just abandoned these soldiers, airmen, marines, sailors and coasties after they stood up, and now, we don’t take care of them afterwards. It just breaks my heart,” Masse continued “We need to remember why we are standing here speaking English and not German or Japanese. We need to remember that these veterans did not hesitate to answer the call to duty, to serve with honor, to serve with distinction and with love — love of God, love of our country. God bless our veterans and their families. God bless the United States of America.”