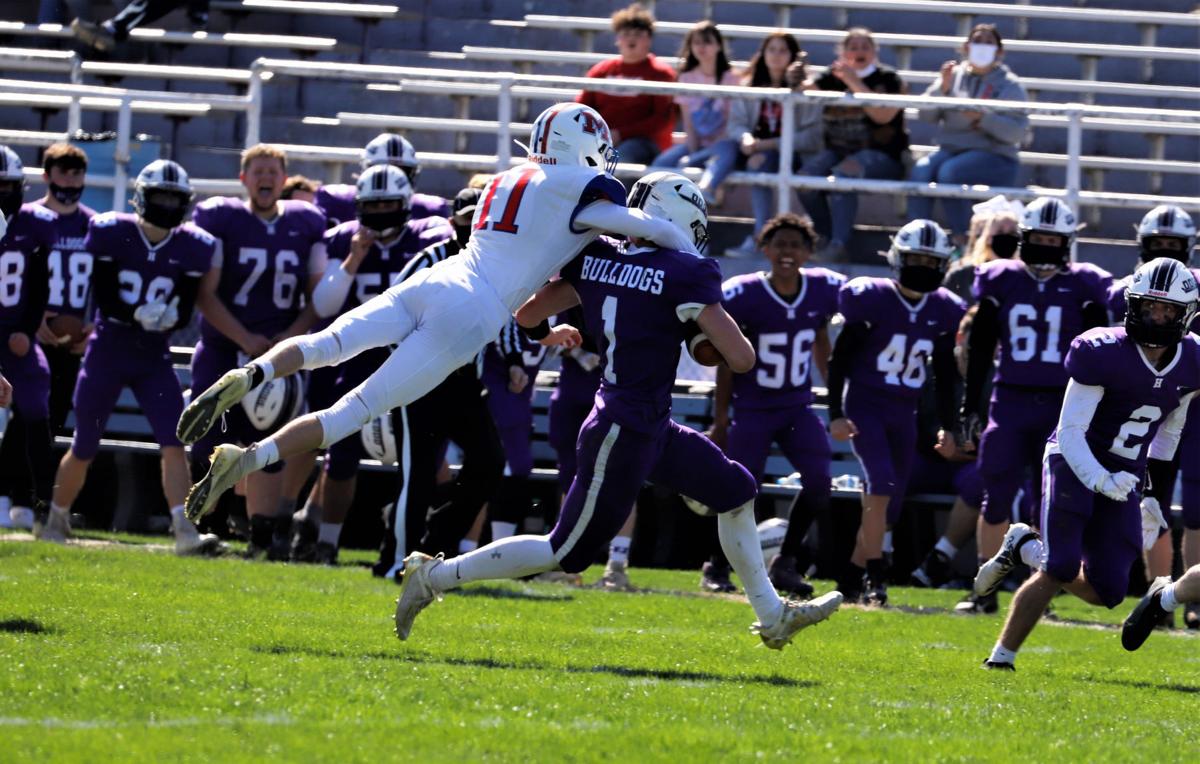 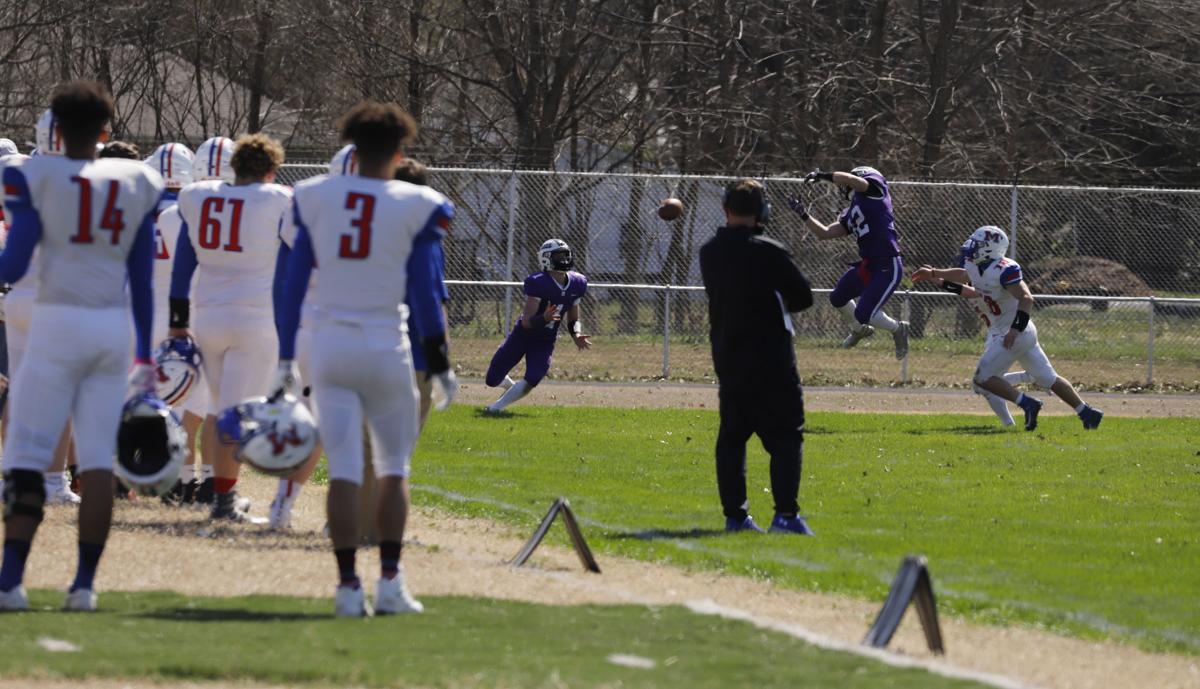 Harrisburg’s Tysen Satterfield locks in on a tipped pass Saturday for a big Bulldogs’ two-point conversion. 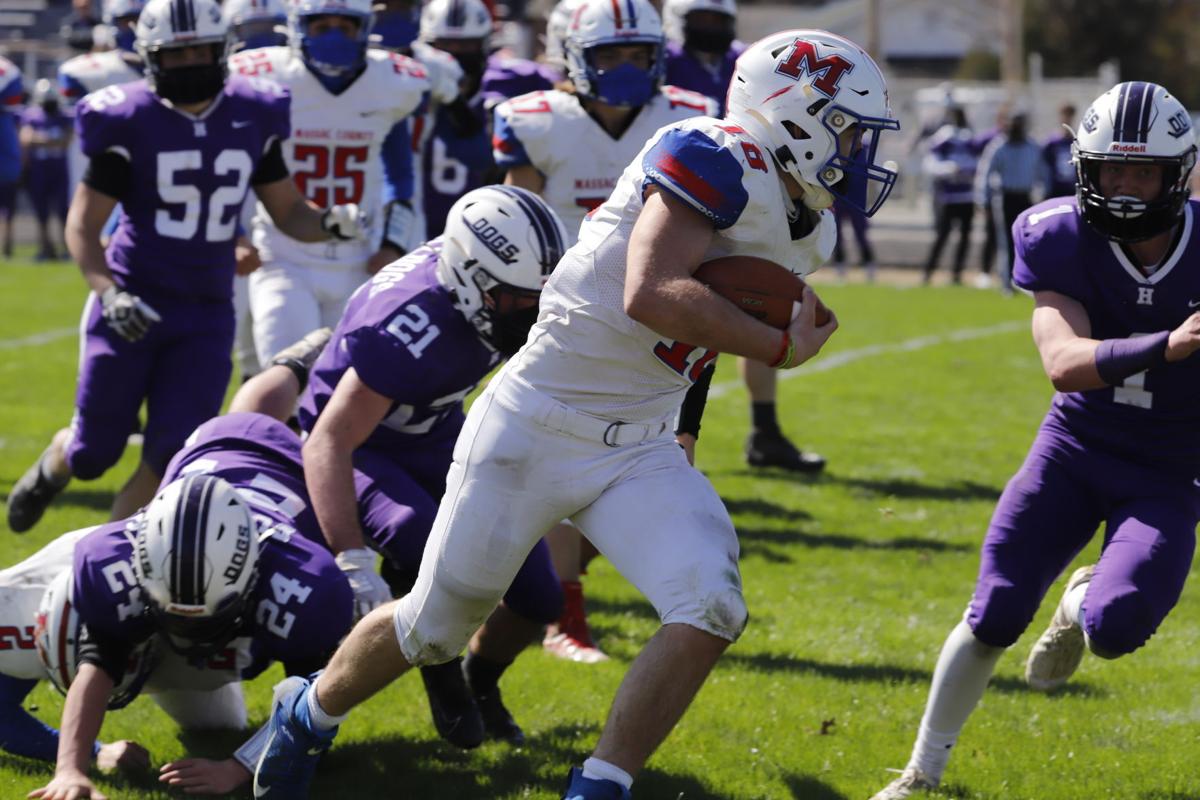 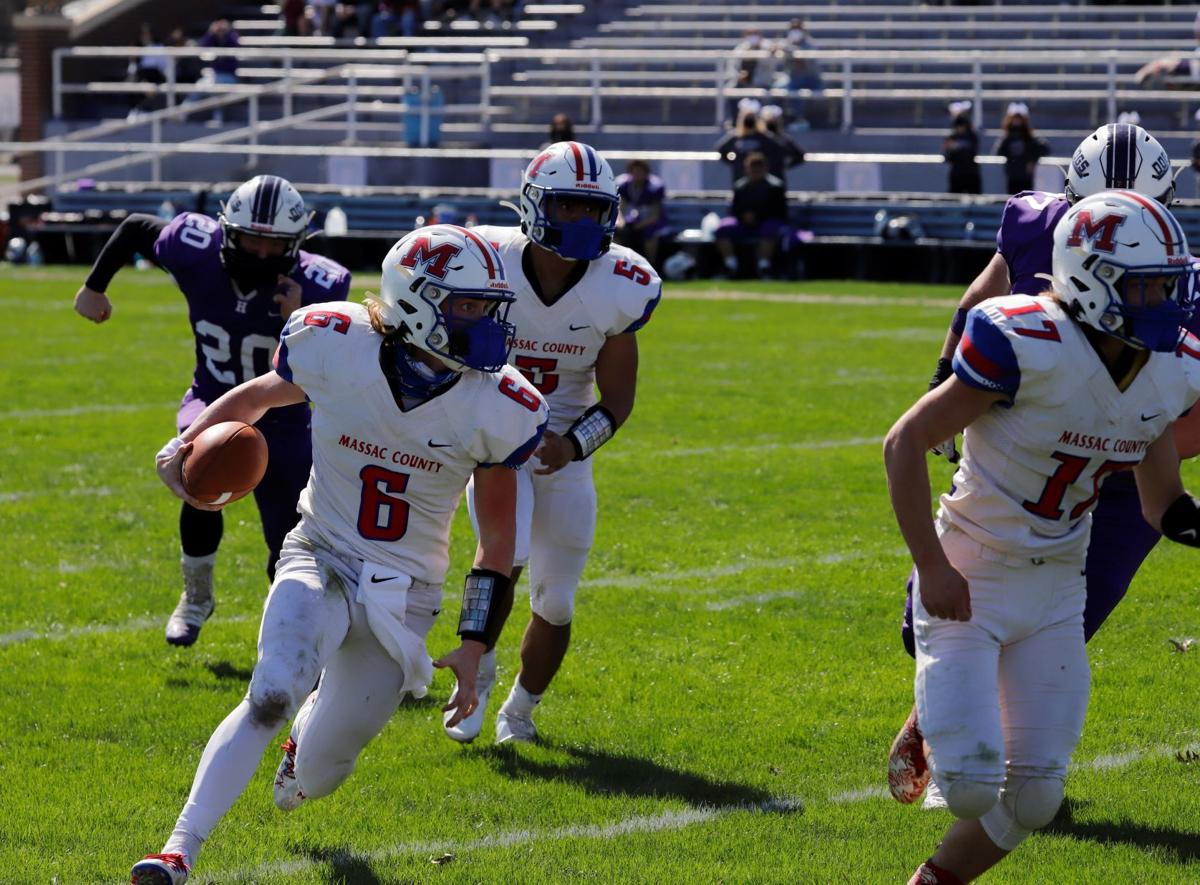 Harrisburg’s Tysen Satterfield locks in on a tipped pass Saturday for a big Bulldogs’ two-point conversion.

A game that was basically a toss-up, with Massac maybe even holding a slight edge, ended with Harrisburg’s Bulldogs ending their winless streak in a spirited, but sometimes slightly ragged, contest.

The Bulldogs and the Patriots were both winless in 2019 when they met in the final game of the year. Massac broke its streak in that game, but the futility hung around for Harrisburg … ’til Saturday.

On a bright, beautiful afternoon with Harrisburg celebrating homecoming, it felt really good to be outside, to see people enjoying themselves and to watch a high school football game. Their field was in great shape with a heavy dose of rye grass on top of the dormant Bermuda, and the emerald green just added to the overall feel of the game.

Massac County drew first blood after both teams felt each other out for most of the first quarter. Jody Dumpprope bulled in from 4 yards out with 1:11 left in the first quarter. Massac’s two-point conversion failed on a botched snap. Massac put up a nice defensive stand late in the second quarter to hold the ‘Dogs off going into halftime.

Harrisburg opened the second half with a couple of long gainers that culminated with a Bryant Lester 2-yard plunge for six points. Their two-point conversion attempt failed as well.

Harrisburg had faced a 4th and 21 yards on Massac’s 27-yard line, but Massac’s pass defense didn’t hold, and Harrisburg was in business at the 3-yard line. Lester took care of things from there.

A Massac County fumble negated a nice gain from Devin Scott at the five-minute mark of the third frame, and Ben Gulley found Jake Hefner for a 22-yard touchdown strike. The ‘Dogs caught a stroke of luck when the two-point pass attempt was tipped and caught by Tysen Satterfield for a 14-6 lead for the ‘Dogs.

Massac gutted out one more scoring drive featuring a nice pass play to Dathan English, a couple of big scrambles by quarterback Justice Willis, some hard running by Dumpprope and a couple of big plays by Scott. Treshaun Bagby hit pay dirt on a short plunge with 47 seconds left in the quarter, and Willis scrambled madly on a long yardage two-point attempt, but came up just shy of the goal line.

That 14-12 count essentially ended things as Massac had one more chance to score but couldn’t capitalize after a Patriot fumble recovery put them in business on a short field. Harrisburg’s defense stiffened, and the ‘Dogs took over on downs after a sideline flag on a Justice Willis run was picked up on the far side of the field. Big Bryant Lester (aka The Purple Bus) took over from there as Harrisburg rode Bryant down the field, eating up clock to the 1:44 mark where Harrisburg had a first down and Massac’s fate in their hands.

All in all, it was a very good game. Statistically things were just about even and things were a lot closer than the final 10-point margin.

All in all it was a good game on a great afternoon and could very well have been a win. Execution and concentration lagged on a couple of occasions, but that was the case for both teams and … I hesitate to say it, but … the officiating crew. There was rust enough to go around for all parties.

Massac travels to Herrin this Saturday for another 1 p.m. game. Let’s hope it’s as good as the first one.