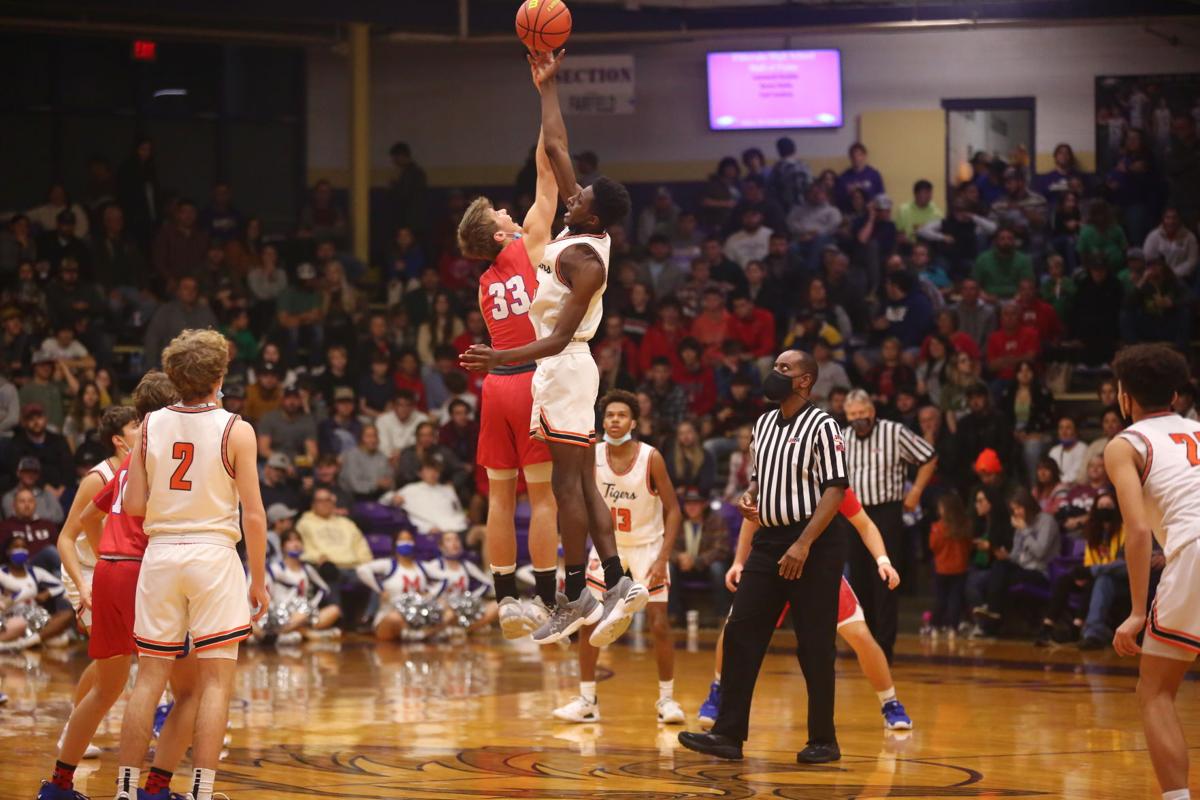 Brady Cissell and Jon Harrison go up for the opening tip in the Eldorado Holiday Tournament title game on Wednesday, Dec. 29. 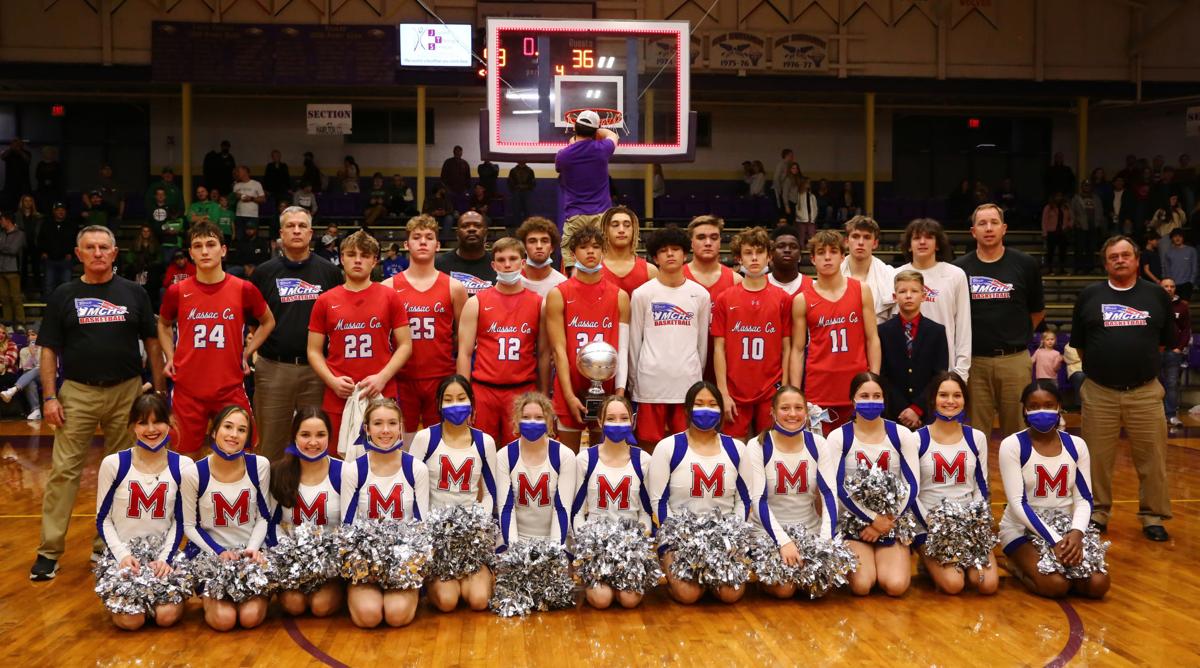 The Patriots show off their second-place hardware from the Eldorado Holiday Tournament. 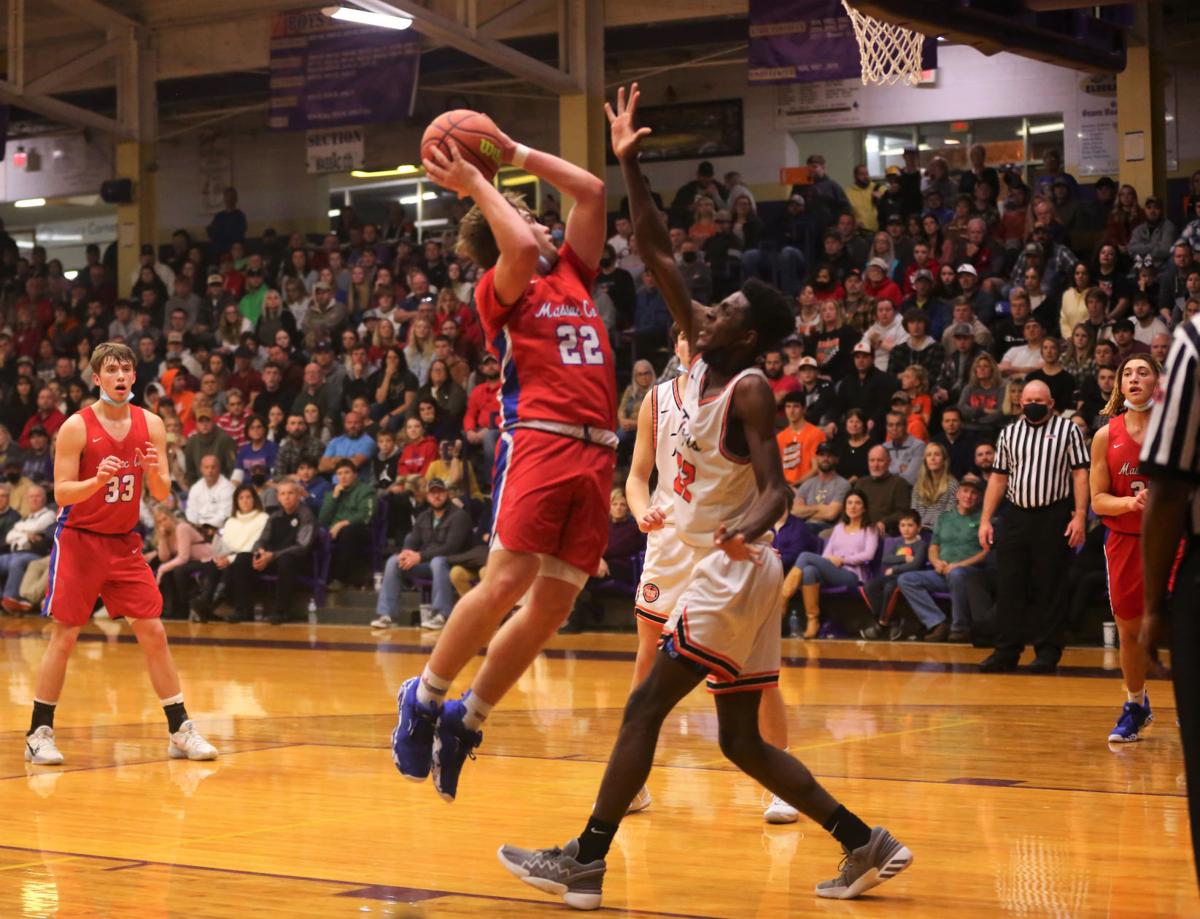 Brady Cissell and Jon Harrison go up for the opening tip in the Eldorado Holiday Tournament title game on Wednesday, Dec. 29.

The Patriots show off their second-place hardware from the Eldorado Holiday Tournament.

The 57th annual Eldorado Holiday Tournament has come and gone and like almost all of its predecessors, this one had to have some lousy weather to go with the normal chaotic parking scheme.

As for the basketball itself, the majority of the games weren’t particularly compelling. In first-round play, only one game was decided by less than double digits. By day three, with the “main players” putting in double duty with early games and late games, the competition evened out.

With a “final four” of Carterville, Hamilton County, Herrin and Massac County, the stage was set to crown a tournament champion on Wednesday, Dec. 29, 2021.

Carterville gave Herrin all they wanted for a while, but succumbed 47-37 in the noon game.

In the 1:30 p.m. tilt, Massac was able to control Hamilton County’s big man Wyatt Hampson, who had run wild Tuesday night, Dec. 28, against Eldorado and walked out with a 57-49 win. Massac got its scoring from Will Harmon, who led the way with 21 points, but Brady Cissell and Ian Higgerson frustrated Hampson to the point where he passed up shot after shot from inside 10 feet.

Massac led by 10 at 51-41 with just over two minutes to go, but a turnover and a pair of Hamilton County free tosses trimmed the lead to eight with just over a minute left. A careless technical foul on Massac could have been disastrous, but the Foxes turned the ball over and for the final 60 seconds or so, the Pats made four of seven free throws and converted a Hosman steal into a bucket for the final eight-point margin.

The win tied Massac coach Joe Hosman with Illinois coaching legend Vergil Fletcher (Pana, Mt. Pulaski and Collinsville) at seventh place on the Illinois all time wins list with 792. Unfortunately, that “mojo” didn’t carry over into the final game of the day.

Fatigue, turnovers, frustration — it seemed like a whole host of “bug-a-boos” reared their ugly heads in the tournament finale as Herrin jumped on top of Massac 9-3 just past the halfway point of the first frame, then really got busy in the waning minutes of quarter number one. Three 3-pointers from the Tigers staked Herrin to an 18-5 lead before Massac cut it to 20-10 at the first horn.

The second quarter belonged to Herrin as they stretched the lead to 31-15 with 21 seconds left in the half. A Harmon three 3 ball trimmed the lead to 31-18, but the writing was on the wall. Harmon accounted for all of Massac’s scoring in the frame with two triples and a bucket.

Herrin opened the third quarter with a couple of three balls and quickly established a 16-point lead. The lead fluctuated between 12 and 15 points for most of period three with Massac closing to within 11 with one minute to go in the frame at 41-30. Herrin established that it could dictate the pace of the game in the third quarter as they ran precious seconds off the clock with almost every possession, and that didn’t change until both teams emptied their benches with 2 ½ minutes left in the game.

It was a dominant Herrin win, but Massac got its chance to avenge the loss Tuesday night, Jan. 4, at Herrin in SIRR Conference play.

But the COVID bug is spiking again and, although this latest strain is supposedly much milder, the same protocols are being followed, and Massac was without a couple of key cogs in the re-match.

Isaac Hosman, Smallman and Reid Martin were forced out of action for Tuesday night, putting the spotlight squarely on Luke Maurer and Reed McCuan as they took over in the back court.

Turnovers were a huge factor in the Eldorado Holiday Tournament title game, and they played a big part in Tuesday’s game.

Herrin got out to a 13-4 first quarter lead and never looked back. Late in the second period, the Patriot stat line read eight points and seven turnovers and the score settled at 37-12 at the end of the first half. Massac redoubled its efforts in the third quarter, and the results were welcome as the Patriots outscored Herrin 12-6 to make things a little more respectable at 43-24 after three.

Herrin sprinkled some subs in to begin the final eight minutes, but a 3-pointer by Harmon opened the final frame, cutting the lead to 43-27, and a short flurry by Massac brought the Tigers starters back in, along with some ramped up pressure. But both coaches began substituting early, and the game score settled at 50-28.

At the Eldorado Holiday Tournament, the following players were voted to the All-Tournament Team: Kade Lustenberger from Carterville; Josh Owens and Parker Price from Eldorado; Dylan Best from Fairfield; Wyatt Hamson and Brady Thrane from Hamilton County; Jake Vaughn (my personal MVP) from Hardin County; Riley Chrostoski from Herrin; and Will Harmon and Isaac Hosman from Massac County. The Duff-Kington Award was presented to Norris City-Omaha-Enfield Community High School’s Joel Horton and the tournament MVP Award went to Herrin’s sharp-shooting wingman Haydon Mayer.