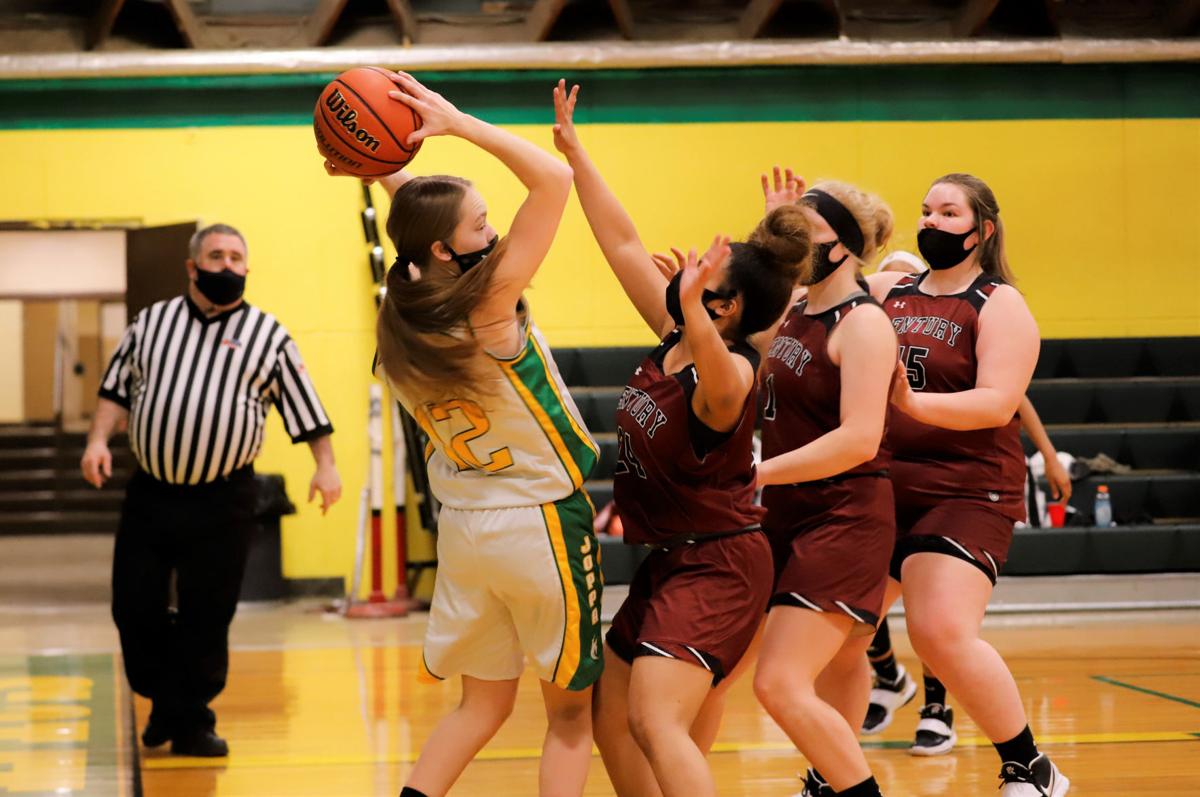 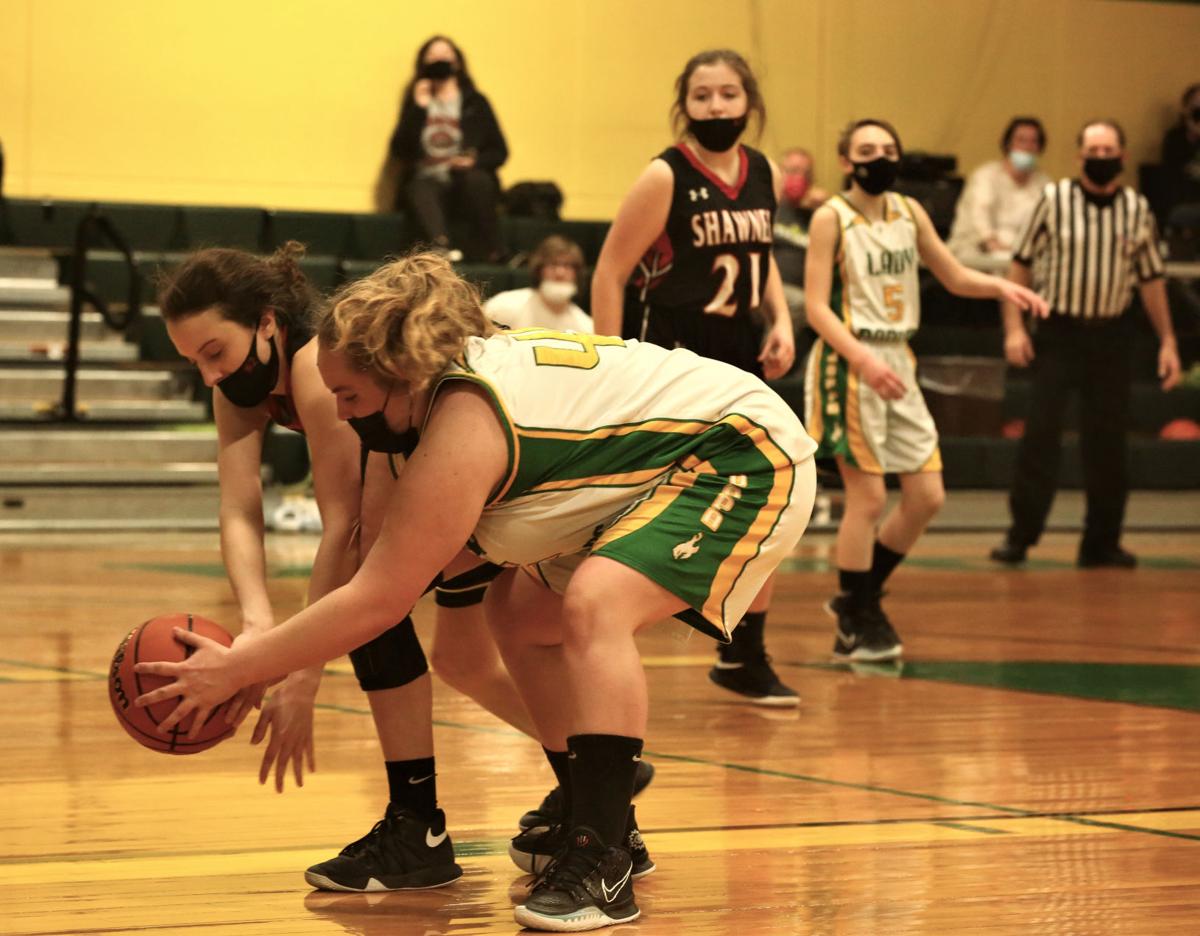 Joppa’s Sky Keeling tussles with Shawnee for a loose ball. 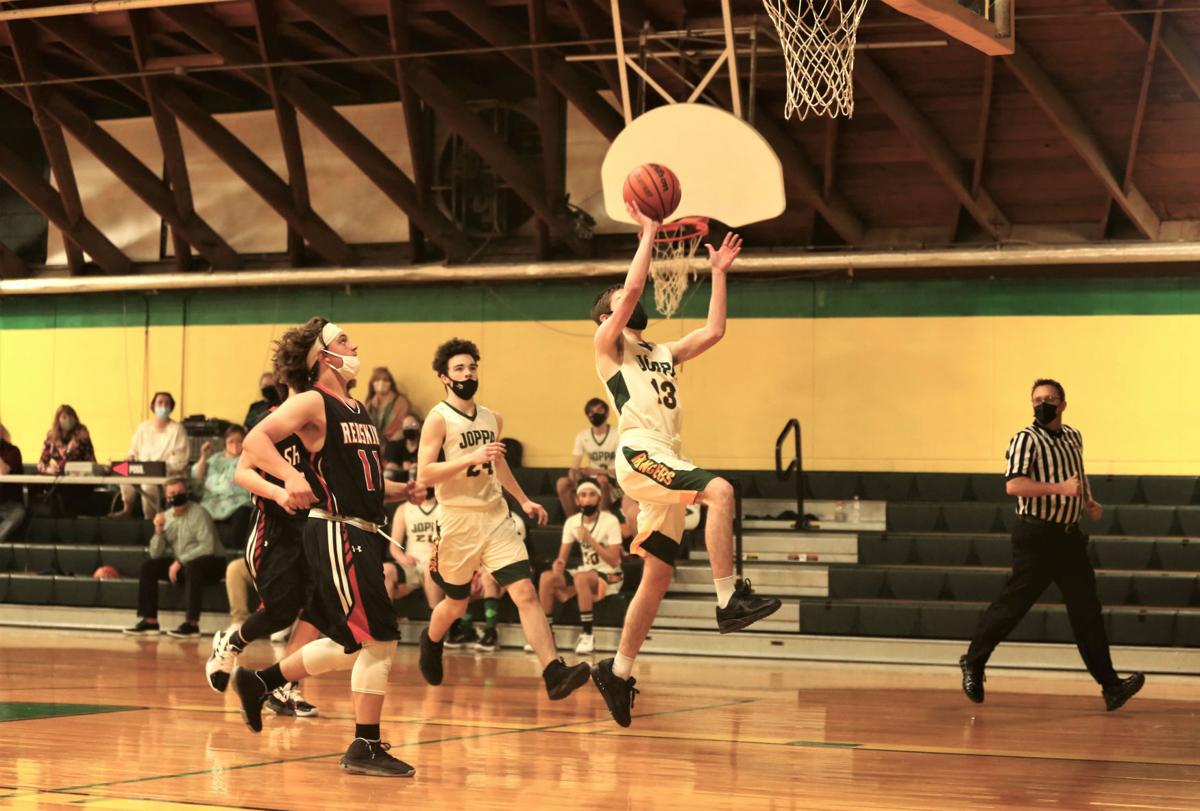 Joppa’s Sky Keeling tussles with Shawnee for a loose ball.

To a kid, one-on-one, two-on-two or three-on-three makes no difference — basketball is basketball.

To a high school, though, five is the requisite number for a “sanctioned” high school basketball team … at the barest minimum.

I’ve noticed a markedly smaller number of girls out for basketball this year, especially at the small schools. Monday night’s girls’ game between Shawnee High School and Joppa was a stark example.

Joppa coach Jori Deneve has five players … period. Shawnee coach Nathan Pitts had, at one time, eight girls on his roster. But with COVID and other factors, Pitts faced the Monday night game with a roster of five girls.

We joked at halftime about the “pros and cons” of a five-player roster, but there’s not really much upside. Our conversation must have jinxed the Shawnee girls as two of them went down with ankle injuries in the second half.

Deneve did the sporting thing for the fourth quarter as she had her two post players stand idle on the floor while the Lady Rangers and Shawnee played a good ol’ 3-on-3 game.

With a balanced scoring effort from four of her players, Deneve’s Lady Rangers put up a 34-24 win.

The win followed a hard-fought 41-34 loss to Century on Saturday.

Duke and Karleigh Jones tossed in 18 and 17, respectively, for Century.

Joppa RangersJoppa’s boys tangled with Century Saturday in an afternoon affair, and when the dust settled, Joppa had a hotly contested 68-63 win.

Matt McGinness led Joppa with 20 points, while Mason Dean was close behind with 15.

The Rangers got another good effort from Jacob Smith, who finished with eight points.

Century’s Jake Jones had a monster game with 31 points.

The Rangers shook off blowout losses to Meridian and Cobden and put up wins over Elverado, the aforementioned Century game and a Monday night win over Shawnee.

Monday night’s win over Shawnee was Senior Night for Joppa and Mason Dean celebrated in style with a large 38-point performance.

Century CenturionsFollowing a bad loss to Johnston City, Century’s boys lost another lop-sided game to a tough Agape Christian with the Knights’ Nate Kaufman tossing in 28 points and grabbing 10 rebounds.

Century’s girls rebounded from a loss to Elverado with wins over Agape, Shawnee and Pope County.

Hannah Duke tossed in 30 points in the Agape win.

The Shawnee win was lop-sided as the Lady Centurions took a 55-14 decision.

Mady Dillow did some fine work in the Pope game as well, grabbing 18 rebounds.