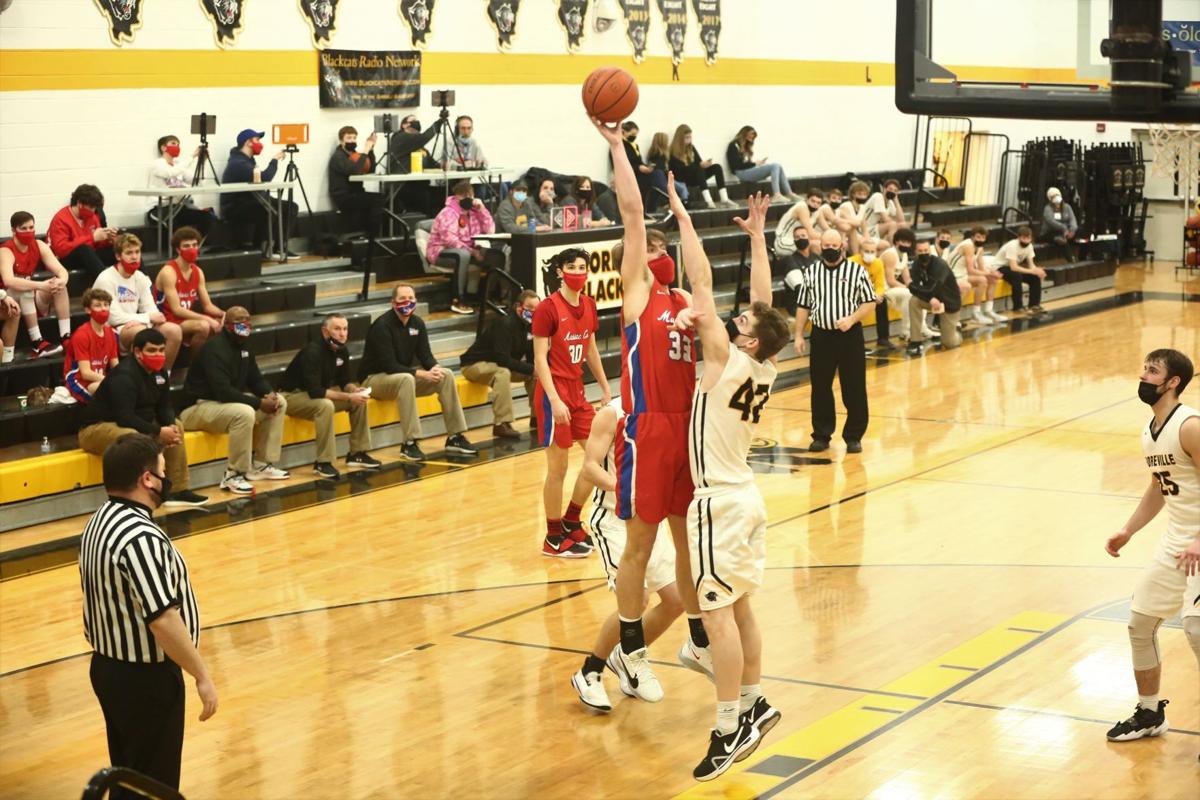 Above left: Brady Cissell shoots over Goreville’s Rhet Schuetz during Saturday’s game. Above right: JJ Sweatt slips in for a layup against Goreville. 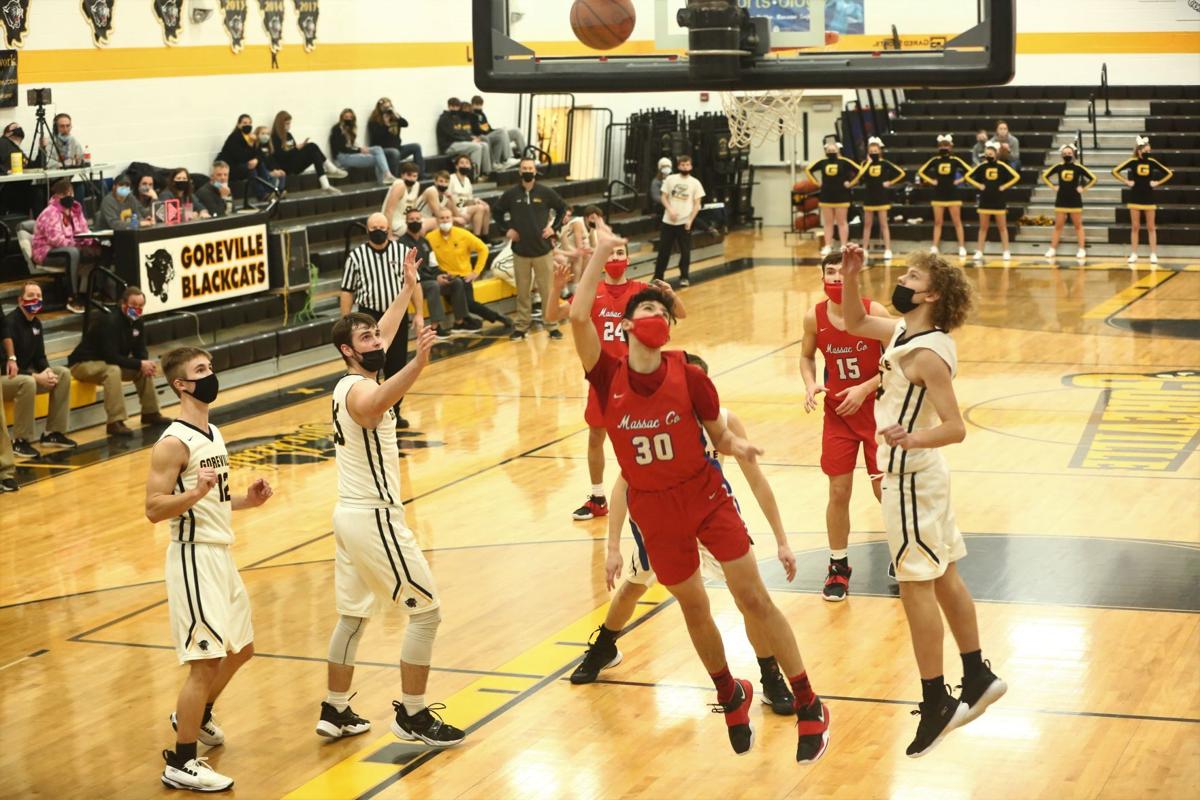 JJ Sweatt slips in for a layup against Goreville. 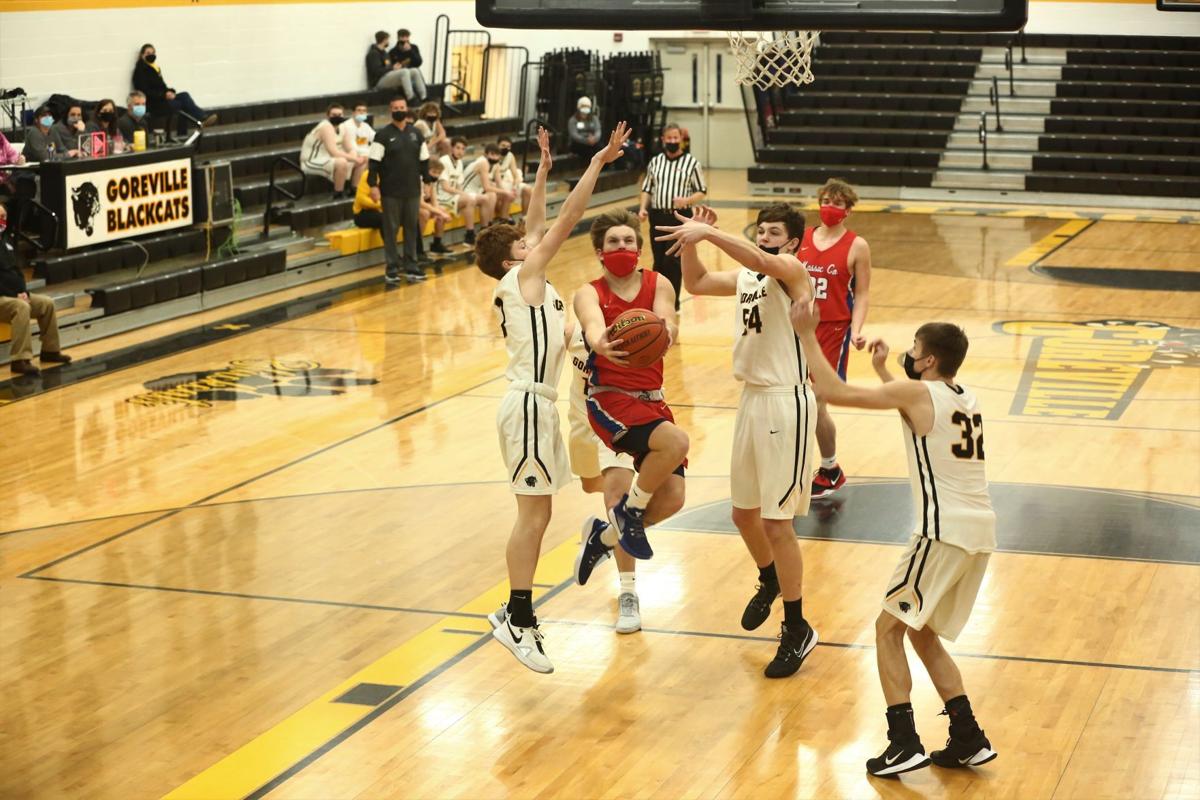 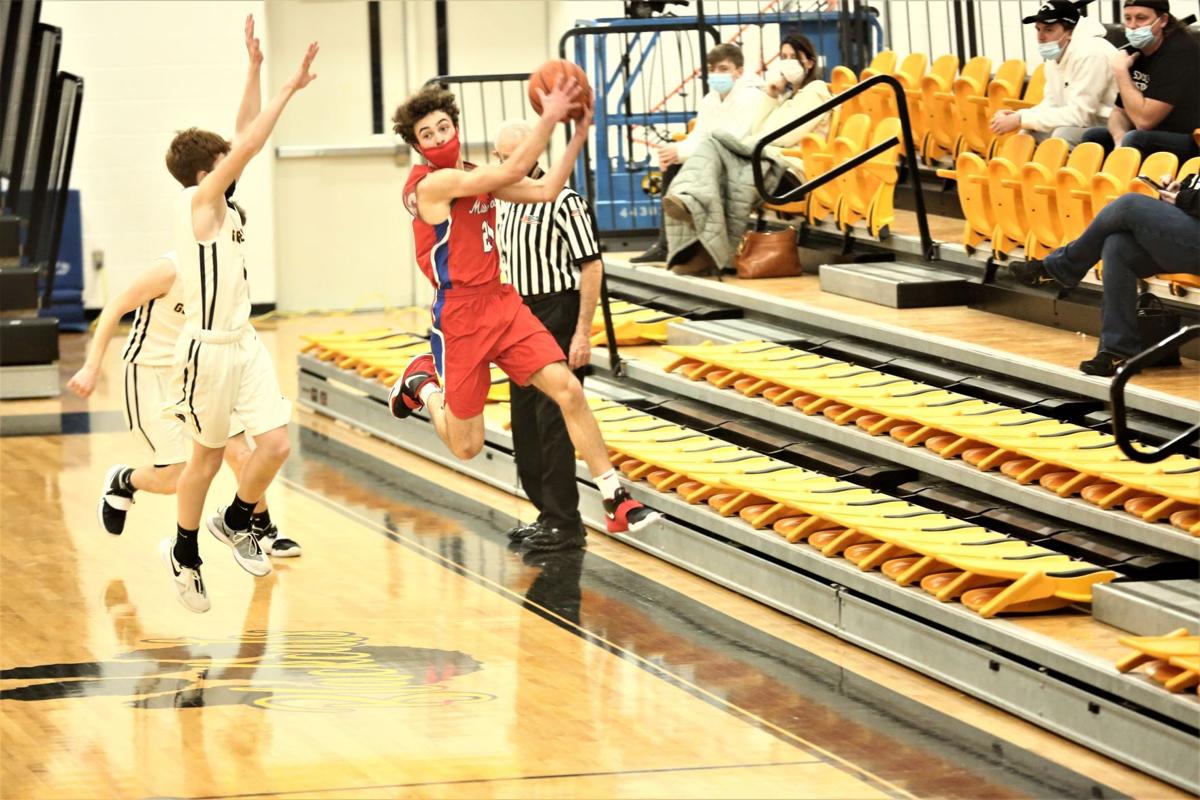 Reid Martin goes all out for the sidelines save on Saturday against the Goreville Blackcats.

Above left: Brady Cissell shoots over Goreville’s Rhet Schuetz during Saturday’s game. Above right: JJ Sweatt slips in for a layup against Goreville.

JJ Sweatt slips in for a layup against Goreville.

Reid Martin goes all out for the sidelines save on Saturday against the Goreville Blackcats.

In a season fraught with more questions than answers, a couple of things are becoming clear. This is definitely an athletic director’s nightmare, and Massac County’s basketball programs are rounding into shape early on. In addition to the COVID guidelines and restrictions, now Mother Nature goes and throws a king size monkey wrench into things.

Massac County had to take to the road last Friday night, traveling to Harrisburg for a SIRR Conference match with the Bulldogs and again Saturday night as they hit the road to Goreville for a meeting with the Blackcats.

Of the Patriots’ first four games, they have taken on two top-tier teams from last year and so far, so good. Graduation losses notwithstanding, Murphysboro was an Elite Eight team last year, and Goreville was on the bus and ready to head to Peoria last March when high school sports were shut down.

Massac County 65, Harrisburg 53Harrisburg was first up for the Pats last week with a Friday night encounter. After a blistering first quarter pace, things settled down and a typical Patriot-Bulldog battle was on.

Both teams put up 20 first quarter points for a tie game. The pace slowed, but the game was still tight at halftime with a two-point difference separating the two.

Harrisburg’s Andrew Bittle was a particular thorn in Massac’s side early on, raining 3-pointers on them, but the tandem of Brody Smallman and Will Harmon kept Bittle pretty well under wraps for the remainder.

Entering the final stanza, it was still an air tight margin with both teams trading shots, but Massac’s defense went to work in earnest, limiting Harrisburg’s shots, and Kyler McIntosh asserted himself in the middle.

Massac outscored Harrisburg by 13 in the final eight minutes to ease out to a hard-fought 65-53 win.

After a red-hot start, Harrisburg’s Bittle ended up with 17 to lead the ‘Dawgs.

Massac County 65, Goreville 56The road trip to Goreville Saturday evening was a thrill-a-minute affair. After exiting I-24 at the Goreville exit, the couple of miles to Rt. 37 was an ice-covered roller coaster. We opted for the long way home after that white-knuckler.

The game ended up being a good one as well.

A big first quarter by Massac put the Pats on top 20-9 after one horn and looking like they would make it a blowout. But that didn’t happen as Goreville heated up from the outside to pull within five at the half.

The third quarter was a rough-and-tumble affair with both teams turning the ball over too much, then scrambling on defense to keep it close. Massac amassed a seven-point lead at one point, but Goreville trailed only 47-43 at the end of the third quarter.

With Hosman on the bench with four fouls to begin the final frame, Goreville managed to tie things up at 51 all.

With Hosman back on the floor, a huge series happened at the 3:38 mark. Goreville’s Chase Quigley tied things up at 49; McIntosh broke the tie with a big putback basket. Goreville tied things up again at 51 and then a brief 21-second spurt put Massac on top at 56-51, and things got dire for the Blackcats after that.

Cissell hit one of two free tosses; Goreville ball. Sweatt stole the ball near half court and drove to the rim for a bucket.

Goreville missed, and Sweatt grabbed the defensive rebound. Massac turned the ball over, but Hosman stole it back and scored for the five-point swing with under three minutes to play.

The last couple of minutes featured a lot better ball control for Massac as a spread floor and some brisk, accurate passing yielded three easy assists.

Goreville fouled Hosman with 35 ticks on the clock, and after the freshman dropped in both tosses, the die was cast. Massac wound up with a 65-56 win in a game that deserved better conditions than it was afforded. It’s just kinda weird when you can hear almost everything that’s said in the gym.

Hosman led Massac with 21 points. Sweatt had a nice game and 17 points. McIntosh added a dozen and some key moments in the fourth quarter. Harmon, a freshman, was big off the bench again with 11 points.

By the way, the Goreville game came about by way of a West Frankfort cancellation and a last-minute cancellation by Cobden, which was looking for a game also.