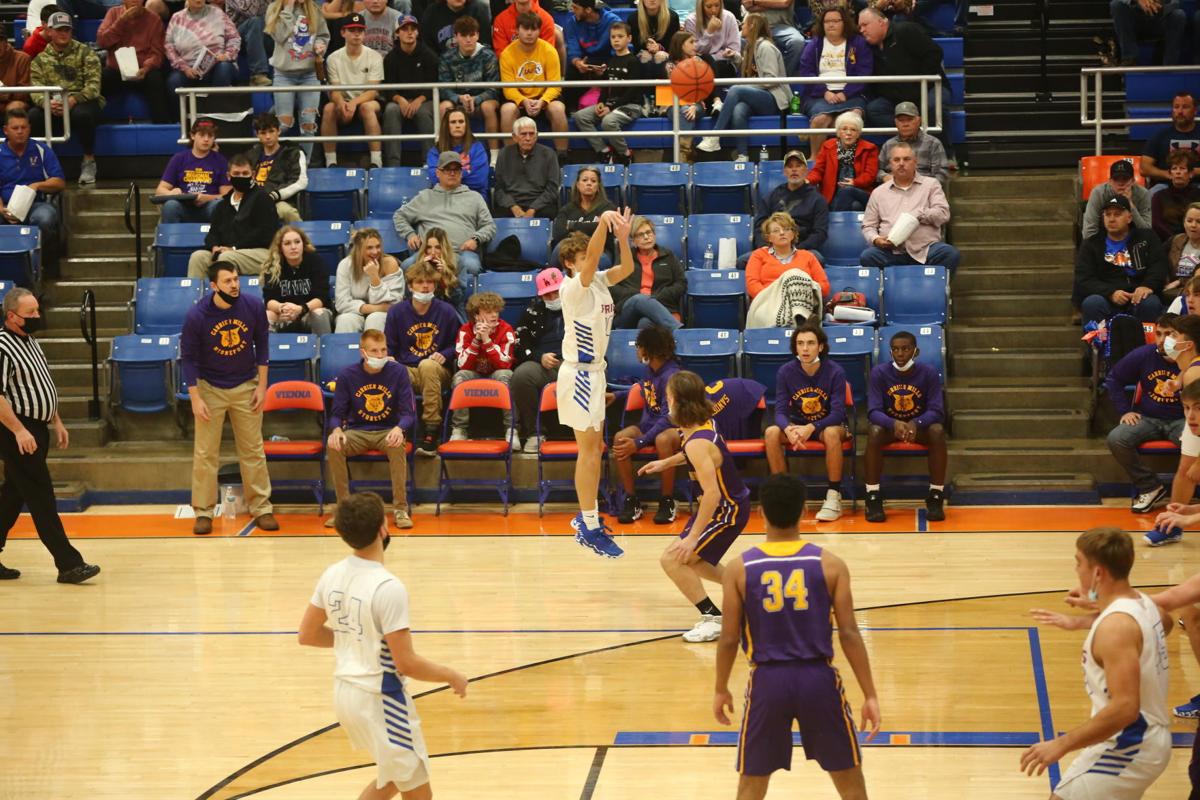 Will Harmon launches a “bomb” against Carrier Mills during the Vienna Thanksgiving Classic. 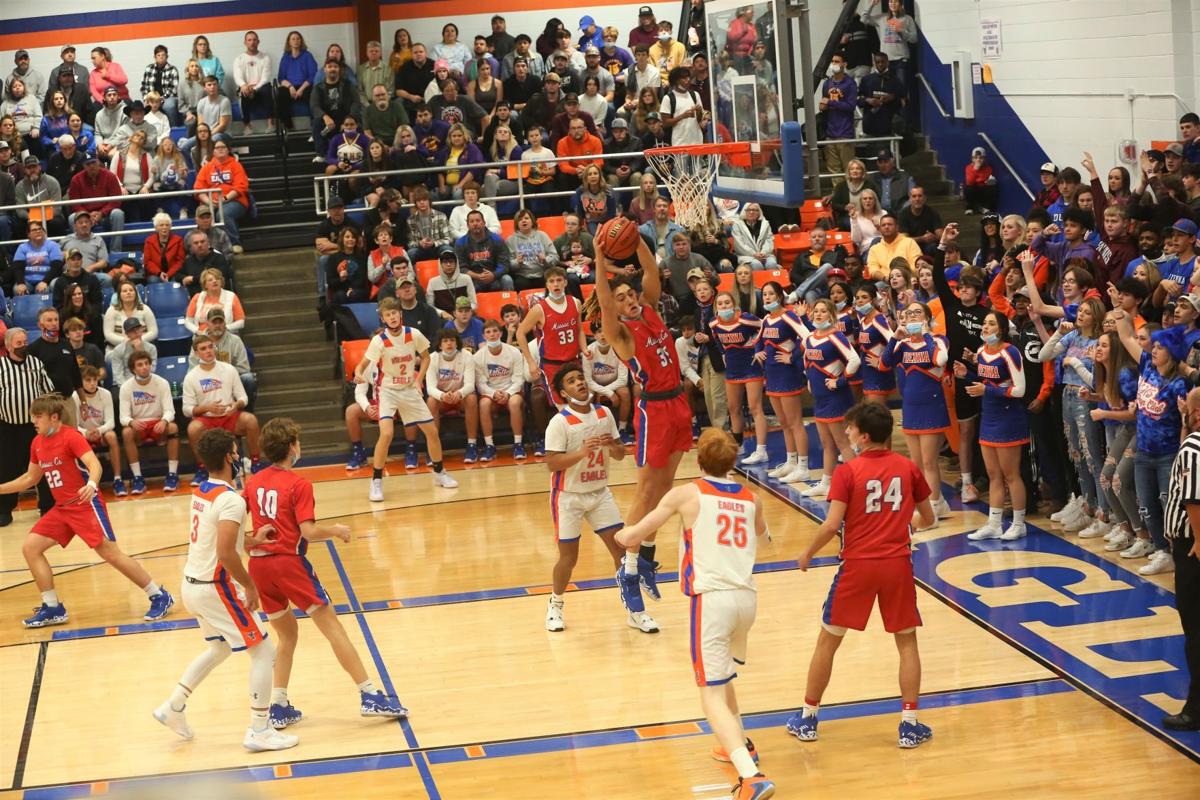 Ian Higgerson comes down with a strong two-handed rebound in the title game against Vienna. 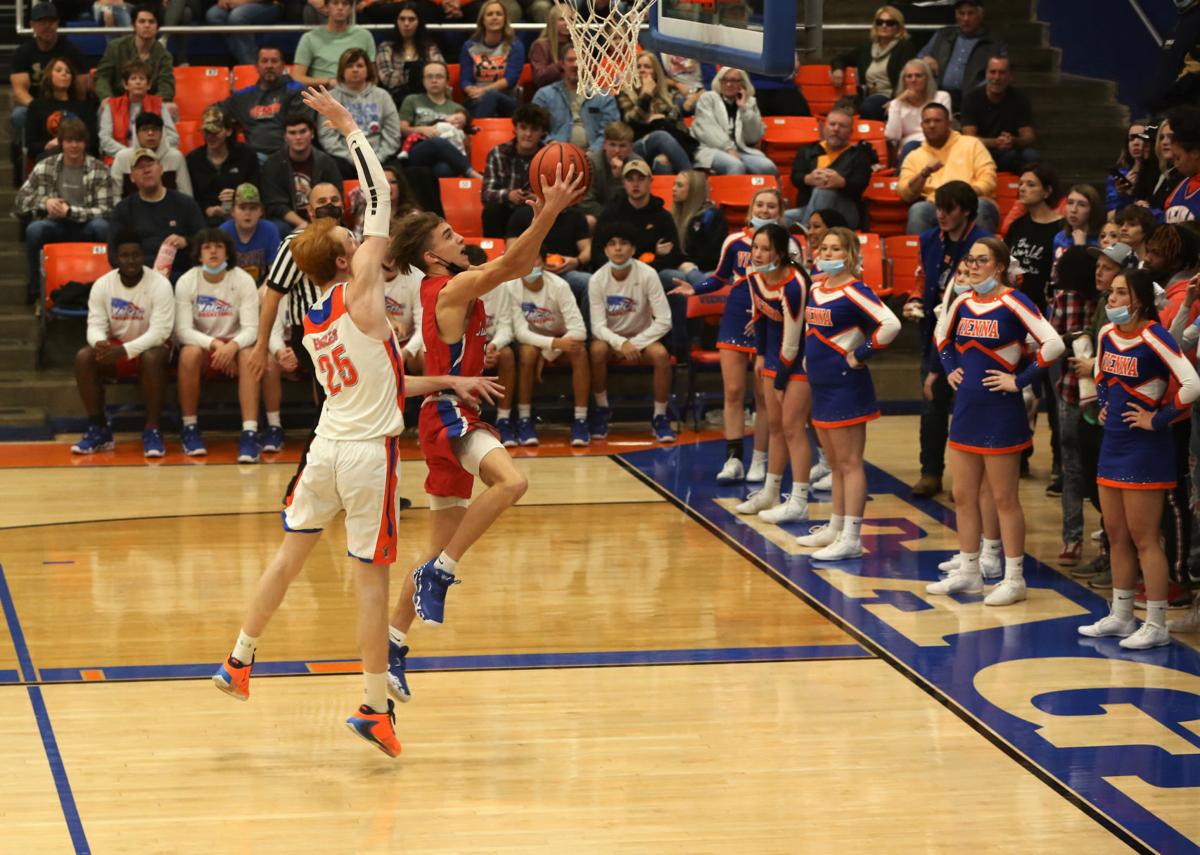 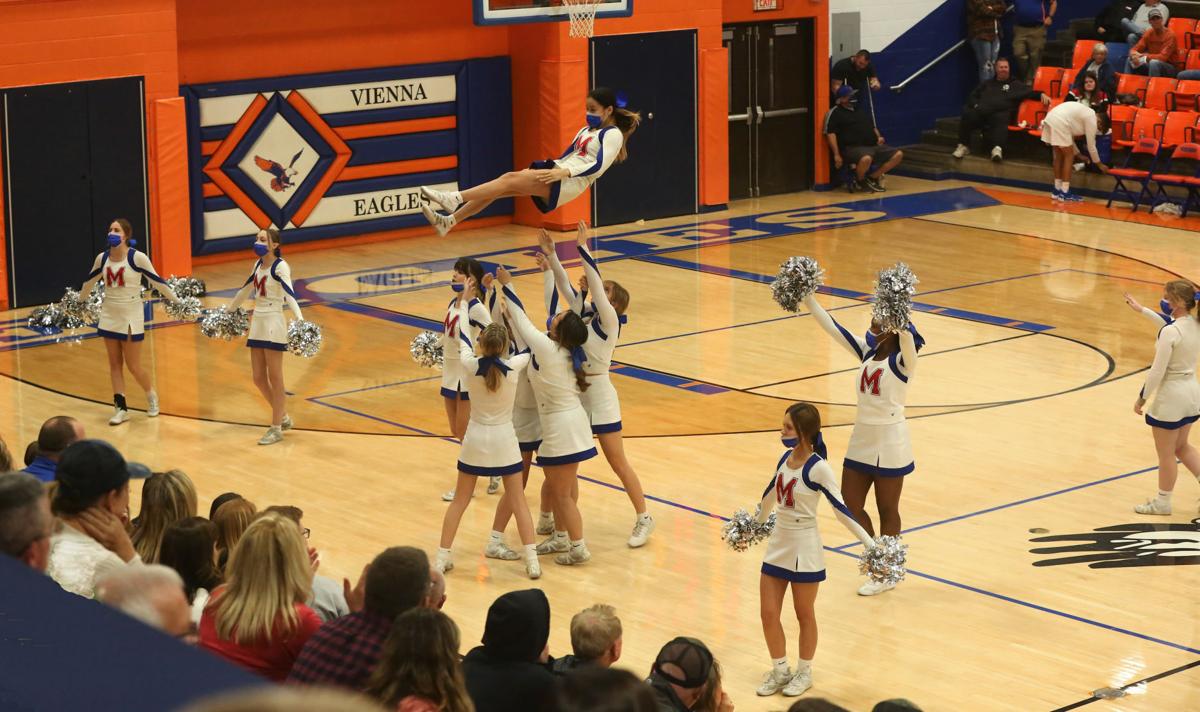 Massac County’s entourage poses with their “hardware” from the Vienna Thanksgiving Classic. The Patriots went undefeated to win the tournament. Vienna was second at 3-2 , with a three-way tie for third place between Cobden, Eldorado and Meridian. With the addition of Carrier Mills, a total of six schools participated in the tournament in 15 strong competitions and several narrow victories with many being nail biters to the end. 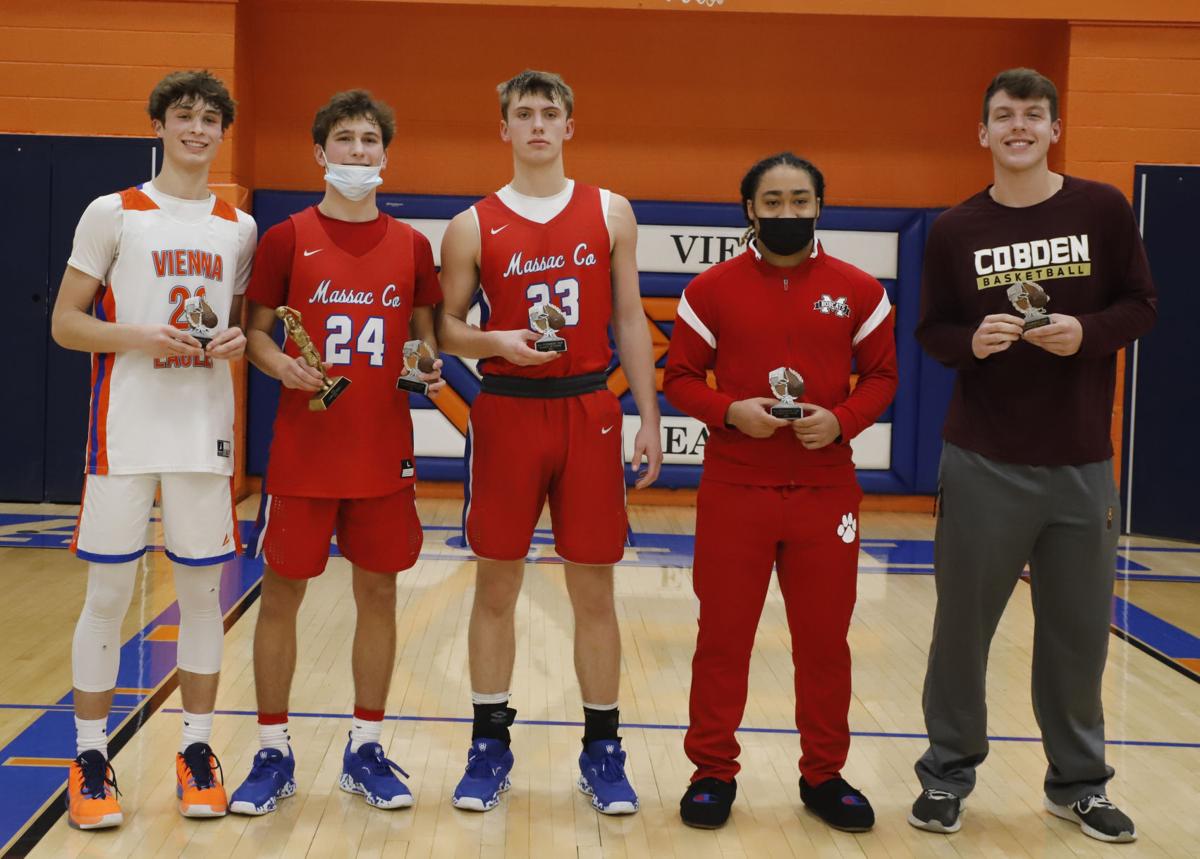 Will Harmon launches a “bomb” against Carrier Mills during the Vienna Thanksgiving Classic.

Ian Higgerson comes down with a strong two-handed rebound in the title game against Vienna.

Massac County’s entourage poses with their “hardware” from the Vienna Thanksgiving Classic. The Patriots went undefeated to win the tournament. Vienna was second at 3-2 , with a three-way tie for third place between Cobden, Eldorado and Meridian. With the addition of Carrier Mills, a total of six schools participated in the tournament in 15 strong competitions and several narrow victories with many being nail biters to the end.

After watching Massac County demolish a scrappy Meridian team in their first game at the Vienna Thanksgiving Classic, it was hard to envision anyone in the field beating them.

After that first game “clinic,” Massac County turned in a business-like 81-55 win over Eldorado.

With three games in three days to open their season, the Patriots then appeared to lose a bit of intensity in wins over Carrier Mills, 59-41, and Cobden, 57-53.

Cobden fielded one of the tallest teams around here and posed match-up problems for everyone, but guard play held them back somewhat as they dropped three of their five decisions.

In Friday night’s game. Nov. 26, Cobden succeeded in disrupting the pace that Massac favors and held the scoring under 60, but Massac held on through the last 90 seconds and pulled out a four-point win.

Going into Friday’s games, Massac and Vienna were unbeaten, and after Massac posted the win over Cobden, things were pointing to a matchup of unbeaten for the tournament title. But Meridian’s Bobcats had other ideas and pulled off a huge comeback win in overtime over the host school in the Friday night finale.

In the 89-85 OT win, the Bobcats plowed through a couple of big deficits to shock the home-standing Eagles. Nevertheless, a packed house was on hand for the finale of the well-attended, well-balanced tourney. Athletic Director David Hill and Vienna High School deserve some big kudos for a job well done! Almost every game was decided late and even the 30-point Massac win over Meridian was a “barn burning” delight for the first half — the first three quarters if you were a Patriot fan.

In the title game, Vienna drew first blood on a bucket by “Big Red” Skylar Blankenship. Brady Cissell countered for Massac for a 2-all tie. Vienna owned its last lead of the night at 6-5 after a Sean Acree bucket. Massac’s formidable guard corps took over from there though with a triple from tournament MVP Isaac Hosman and a subsequent assist to Will Harmon.

Blankenship momentarily staunched the bleeding Eagles with a bucket and a blocked shot on a Cissell jumper, but a second Hosman trey and a Brody Smallman triple followed by a beautiful Smallman feed to Harmon blew the lead up to 10 at 18-8.

Acree drained another 3-pointer, and Blankenship took advantage of a Massac turnover with five ticks on the clock to break away for a big time dunk at the first quarter horn. Massac led 22-13.

The second quarter was almost an exact duplicate of the first as Massac outscored the Eagles 21-13 to expand the lead to 43-26 at the intermission. Vienna held its own in the third quarter and managed to trim one point off of Massac’s 17-point halftime bulge.

The pace slowed in the fourth quarter, and the lead remained constant at 14 to 15 points. Both coaches started sending their benches to the scorer’s table around midway of the frame, and, by the 2:30 mark, both teams rewarded their bench players with time on the floor in front of the packed house.

Maybe the last 18 months or so just makes you realize what we’ve missed out on through this COVID mess, but the tournament went very well and the crowds were large, loud and well behaved, maybe even appreciative.

For the record, the teams’ performances went like this. The game Carrier Mills bunch ended its tournament with a win over Meridian to go 1-4 for the tourney. Cobden went 2-3, while Eldorado and Meridian each went 2-3 and Vienna went 3-2. The Patriots ran the table with a 5-0 slate.

The Patriots get a much deserved break and then get back at it in the Marshall County Hoopfest on Friday afternoon, Dec. 3, against host school Marshall County.