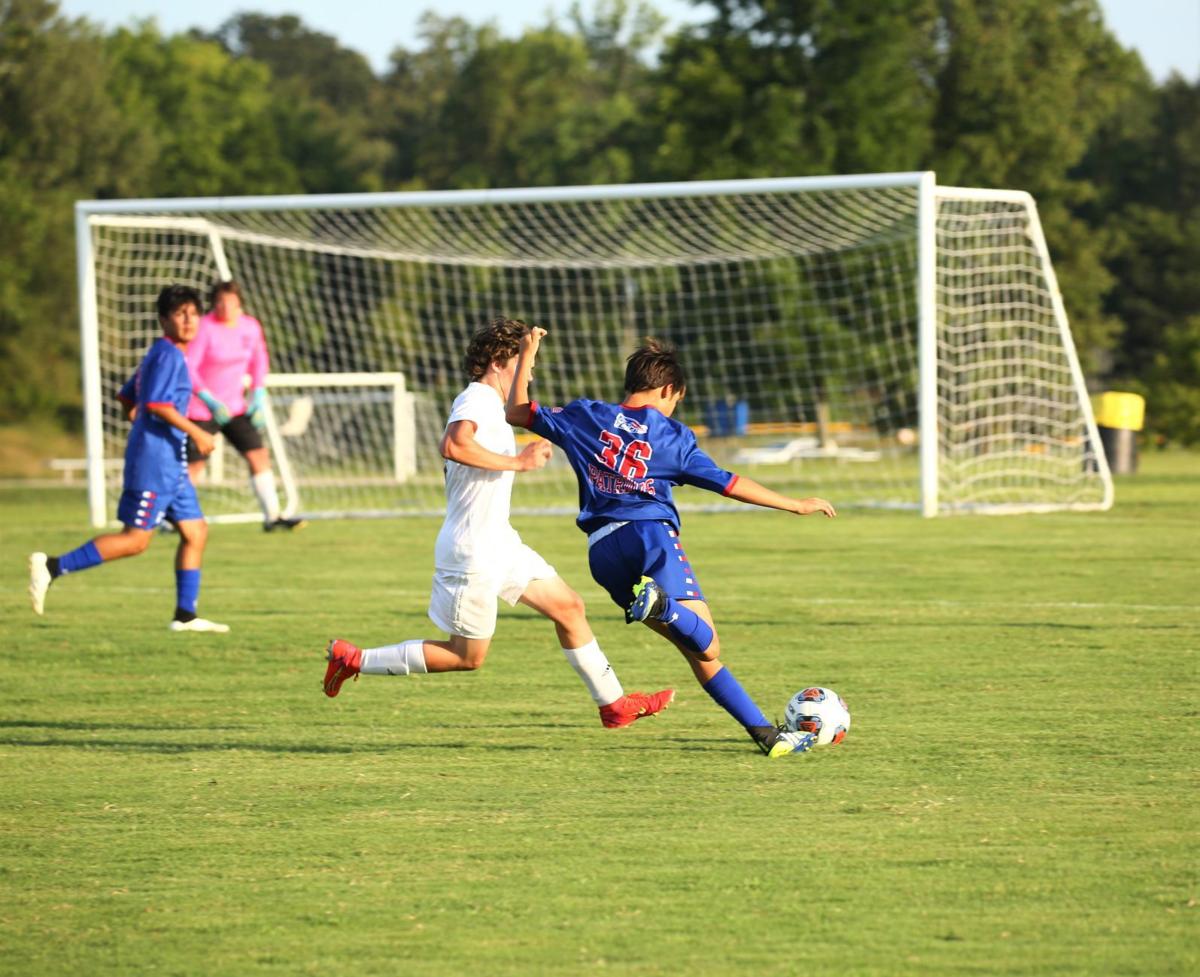 Massac County Patriot Cal Ginger launches a shot on goal against the Pinckneyville Panthers. The Patriots would ultimately win the game 4-0. 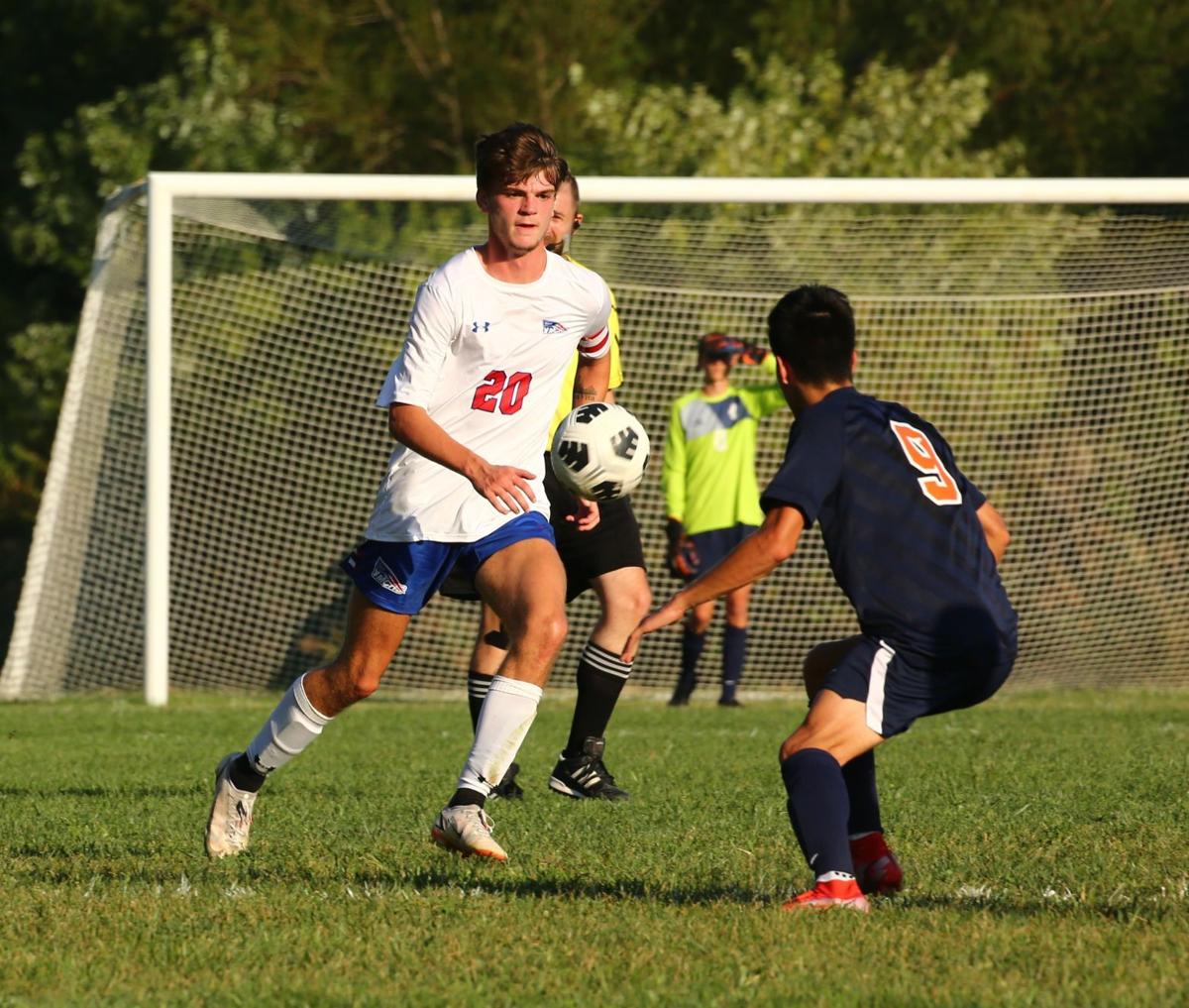 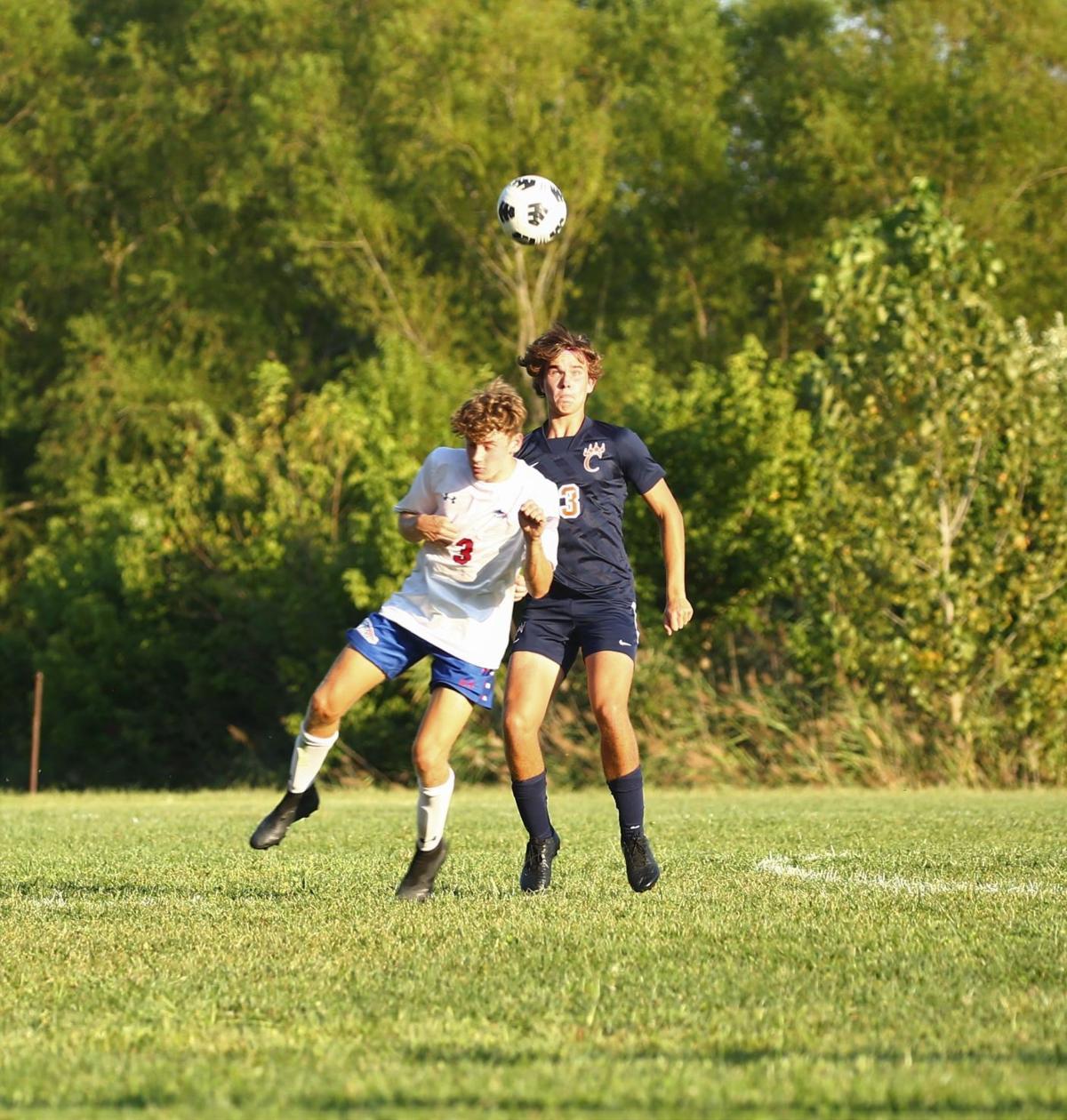 Noah Elliott fights hard for a ball in the air against Carterville Tuesday. 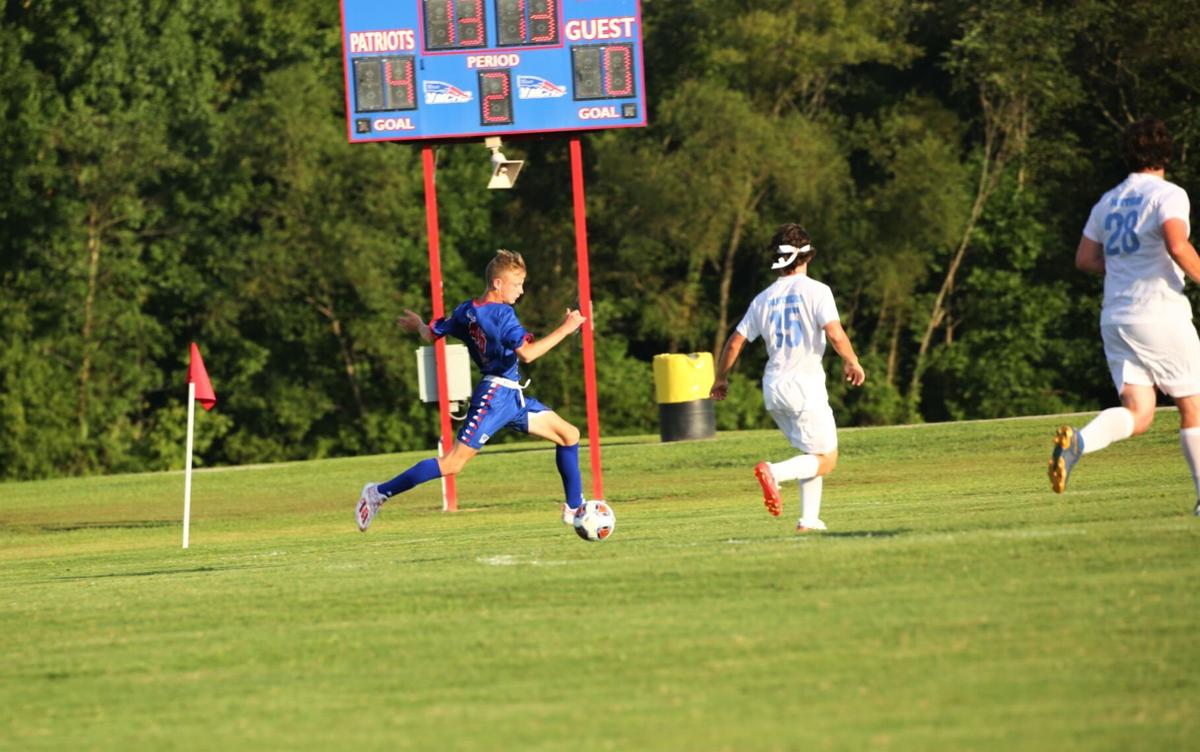 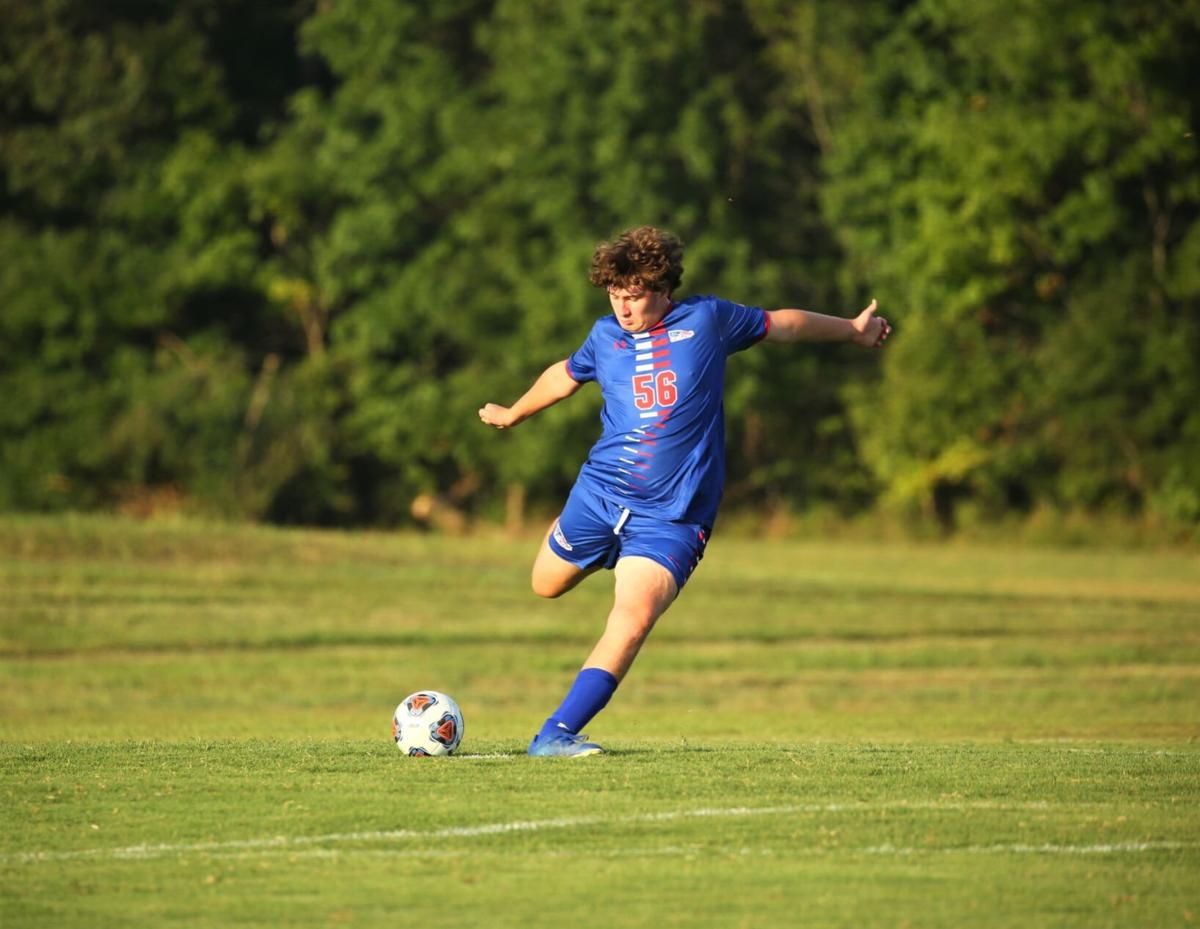 Massac County’s John Stephenson gets ready to slam the ball upfield against the Pinckneyville Panthers during their Sept. 2 matchup.

Massac County Patriot Cal Ginger launches a shot on goal against the Pinckneyville Panthers. The Patriots would ultimately win the game 4-0.

Noah Elliott fights hard for a ball in the air against Carterville Tuesday.

Massac County’s John Stephenson gets ready to slam the ball upfield against the Pinckneyville Panthers during their Sept. 2 matchup.

Massac County’s boys soccer team shut out Pinckneyville 4-0 to notch their second win of the season. Massac took the opportunity against a somewhat short-handed Panther squad to play a lot of underclassmen and the playing time will only benefit the youngsters and the squad as the season progresses. The Pats took on Carterville in a big SIRR matchup Tuesday. The Lions were “a horse of a different color.” In their toughest test of the young season, Massac spotted Carterville a 3-0 halftime lead and roared back to close the gap to 3-2 with around 5-6 minutes left. But a beautifully executed play on goal resulted in a net-finding header and Carterville’s fourth goal. It proved to be the final goal of the game and the Lions owned a hard-fought 4-2 win. Noah Elliott and Eli Quint scored the goals spearheading the Massac comeback effort.

Massac County’s girls golf team competed in the Marshall County Invitational and at Anna-Jonesboro last week and got mixed results. Following a strong showing at Anna, where they finished second, the girls struggled a little in the Marshall County affair finishing fifth. In the nine-hole event at Anna, Marion took first with a 162 while Massac was seven strokes off the pace with a 169. Marion’s Grace Roper was the overall medalist with a 38 with Massac’s Elise Coakley and “Josey Wales” Walker firing identical 39s. Olivia Heine also medaled with a 43. The girls ran into a little trouble in the ten team Marshall County event as the team score ballooned to a 371 while winners Marshall County blistered the Calvert City Country Club course with a 303. Madisonville/North Hopkins finished second with 315, McCracken County came in third with 338, Glasgow was fourth at 340. Lyon County’s Cathryn Brown ripped up the venue with a five under par 67 to win overall medalist honors. For Massac, Elise Coakley led the way with a tidy 81 but in support only Walker and Williams were able to crack the century mark with a 90 and 97 respectively.

Massac County’s volleyball team ran their record to 6-2 with a very business-like straight set win over West Frankfort Tuesday evening. The girls were almost on cruise control in the 25-9, 25-9 win. Not at all like last Thursday’s three-set squeaker over Herrin. In front of a boisterous — to say the least — Herrin student section, Massac managed to control emotions and output. After a first set loss of 23-25, the girls got things back on track and spanked the Lady Tigers 25-16 in the second set. Massac kept it together for the finale and took the final set 25-21. Leaders for Massac were: Kills — Edwards (16), Hart (10) and Gower (9). Blocks — Hart (3) and Adams (2). Digs — Bormann (32), Gower (31), and Conkle (30). Assists — Martin (38).