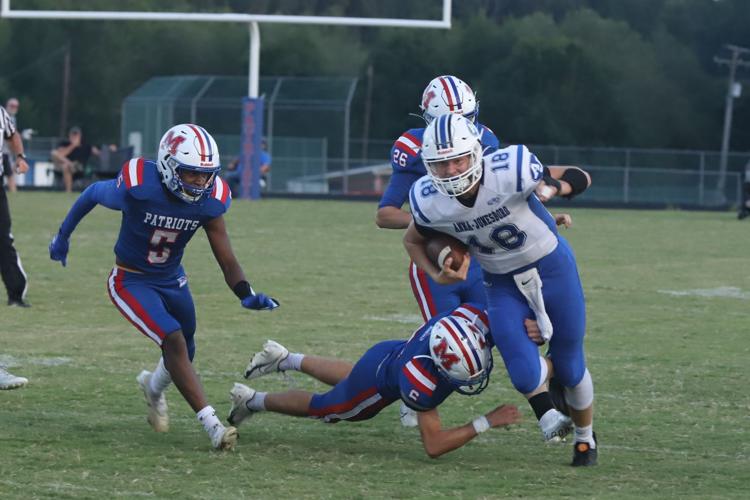 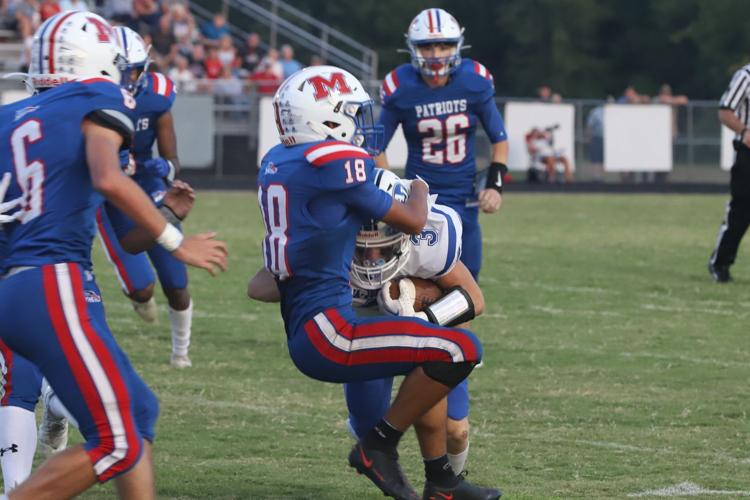 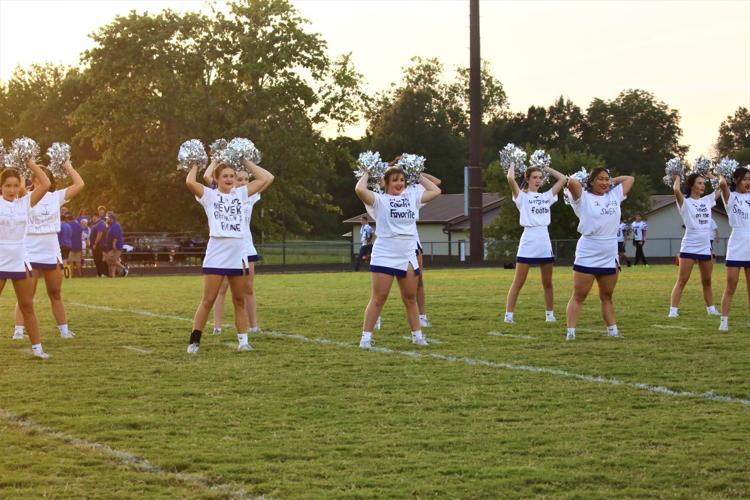 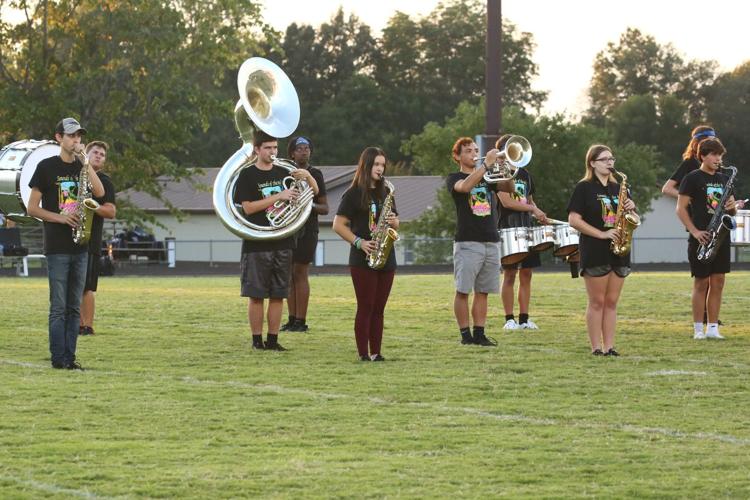 The Marching Patriots put on their field show during Friday night’s game.

The Marching Patriots put on their field show during Friday night’s game.

On paper, it looked like a pretty even matchup, and it probably was, but the final score didn’t show it as Anna-Jonesboro doubled up Massac County, 41-20, last Friday night, Sept. 9.

Things started off well for Massac as the Patriots, with the help of some ill-timed penalties on Anna, held off a scoring threat by the Wildcats and took possession. More penalties, on both sides, and a couple of Brody Smallman passes to Hunter Box and Kris Garnett, got Massac across mid-field, and then on a fourth down and 8, Smallman found Tyrus Riley open for a 30-yard “catch and run” touchdown strike. Massac’s point after kick was short, and the Patriots claimed their only lead of the night with 5:23 on the clock.

On the ensuing possession, Payton Denny completed three passes for Anna, moving them smartly down the field, and with 1:14 left in the first quarter, Denny snuck in from the 2-yard line for a 6-all tie. Suggs’ extra-point kick was good and Anna-Jonesboro took a 7-6 lead.

Denny struck two more times in the first half on runs of five and 10 yards for a 21-6 Wildcats lead at the intermission.

The second half began with Massac scoring on a short pass to Nathan Myers with 8:34 on the clock. Myers punched in the two-point conversion, and Massac trailed by just one score at 21-14.

But that’s where it ended as Anna-Jonesboro roared back with another Denny touchdown. This time, he found T.J. Macy open for a 41-yard touchdown catch-and-run. The PAT was blocked, and the margin was 27-14.

Massac still had hopes of a comeback as Smallman got with sophomore Garnett for another long touchdown, this time a 70-yarder. With just over a minute left in the third quarter, Massac trailed 27-20, and the comeback hopes were still alive.

But Anna-Jonesboro wasted no time in the fourth quarter, scoring at the 10:36 mark and delivering the dagger two minutes later with a Denny-to-Macy, 18-yard touchdown strike. Their two-point conversion was good for the final margin of 41-20.

Denny had a monster night for Anna with 166 yards passing and 200 yards rushing. The rushing game for Anna turned out to be the difference maker as they outgained Massac by almost 200 yards.

Massac’s aerial game was good again as Smallman completed 17 of 30 attempts for 296 yards. Garnett caught 11 of those throws for 218 yards.

Both teams were penalized heavily.

With the loss, Massac drops to 2-1 and Anna improves to 1-2 on the season.

Massac is in action this Friday night, Sept. 16, at home against Murphysboro in a big homecoming matchup.